Bark River Fingerling review: This may be the hunting knife you’ve been looking for 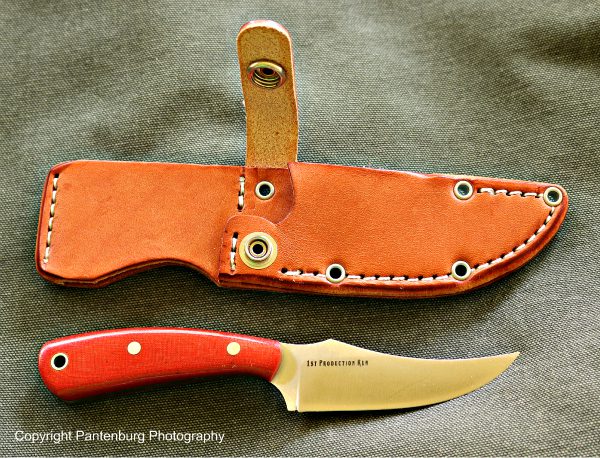 This is going to be a very popular knife among hunters.

Disclaimer: I did not get a free knife for doing this review. I don’t work for Bark River, and neither Bark River, Knivesshipfree.com nor DLT Trading had any input in this review. All the opinions expressed here are mine. All I ever promise on a review is a fair shake.

My first cousin, Joe Wirth, is raising his two sons right. His family lives on a farm, about a half mile from the farm Joe was raised on. Joe’s kids are hard-working, polite and ambitious and a lot of fun to hang out with. When they get out of school, the boys have farm chores to do, livestock to take care of, and little time for video games. The two raise award-winning sheep, and run a profitable trapline during the cold weather months. 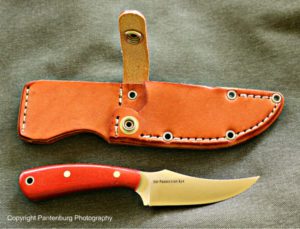 The Bark River Fingerling is based on a classic knife design.

Last year, they caught nearly 500 raccoons. The guys skin and butcher the animals, and sell the hides and meat. Nothing is wasted.

I asked to see their trapping setup. They had a complete skinning and butchering layout in one of the sheds. When they came in with raccoons or other furbearers, they didn’t waste any time processing them.

“So what do you skin those animals with?” (The nosy knife enthusiast always comes out!)  They showed me a Sharpfinger™ and a four-inch Mora style knife that do most of the work. Obviously, they are interested in tools that can do the work quickly and effectively.

Bark River’s Fingerling is based on the popular Sharpfinger™ pattern, with the BR quality workmanship and superior materials.

Here are the Fingerling specs, courtesy of Knivesshipfree.com.

Bet you didn’t know this:

According to a Wikipedia post: “In an interview with Harper/Collins regarding his book “Dead in 5 Heartbeats”, Barger commented on the Sharpfinger knife: 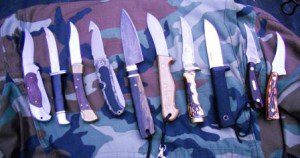 These knives are carried by experienced elk hunters I hunt with. The Sharpfingers are the two on the right.

“A lot of people I ride with carry that knife. I actually prefer fixed blades — like the Sharpfinger — to a folded blade. Although I carry a folded blade too, with a fixed blade you don’t have to reach inside your pocket. It’s always handy, on your belt when you need it. I use my Sharpfinger as a tool. I do everything with it. I like knives with sharp points. You never know when you might want to pop a balloon or peel a banana.” [2]

I’ve haven’t needed a knife to pop a balloon or peel a banana lately, but I have seen Sharpfingers used at hunting camps for years. I always thought the design had merit as a skinning knife. As such, the belly of the blade, just back from the tip, is rounded and nearly ideal for separating the hide from the meat.

But the Sharpfingers I saw used didn’t hold an edge all that well, and if you used a Sharpfinger, you could plan on sharpening during the job.

Here’s what I found out about the Fingerling: 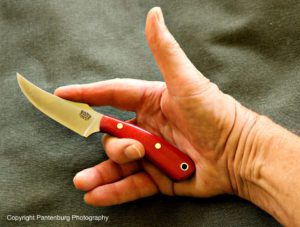 The Fingerling is designed for a skinning grip. The index finger rests on the spine, the fourth and fifth fingers lock the end of the handle into the palm and the thumb and second fingers secure the grip.

Point: The Fingerling has a thin point, ideal for skinning around the neck and shoulders on a deer or elk. The point is good for piercing, and the initial under-the-tail work of field dressing. This is not a knife to use for that initial spine-down, edge-up cut that opens up the abdomen of a downed big game animal. The point could easily pierce the entrails if the user isn’t careful.

Blade thickness: The .125-inch thickness is good for a knife that could end up being used as a utility knife. I would prefer a thinner blade, simply because they skin and slice better. With a super steel such as CPM-3V, there is no worry about breaking the blade.

Grind: All BRs are convex ground. I have proven to my satisfaction that a convex is the best grind for most of the knife work I do. The original sharpfingers were hollow and/or flat ground.

Steel: The big improvement with the Fingerling is the CPM 3V steel. I use A2 and CPM 3V almost exclusively in my knives, and I love the edge-holding ability of both. With either of these steels, you won’t spend much time re-sharpening. I used to carry sharpening tools in my daypack while hunting. With A2 or CPM 3V blades, sharpeners can be left back in camp.

Blade design: The blade has a pronounced curve, distinctive from most other utility knives marketed in the United States, as well as being smaller than the average American utility or hunting knife. 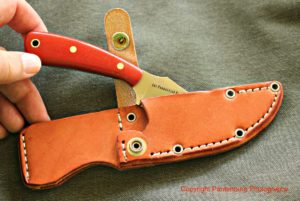 The Fingerling leather sheath is well-designed and works really well.

Handle: The Fingerling handle is designed to be held in what I call a “skinner grip.” The index finger rests on the spine to guide the blade, and the third and fourth fingers grip the handle and keep it from twisting. The Fingerling handle design is perfect for that. For a working, user knife,  micarta is my favorite. The material is bulletproof, and gets tacky when wet. This assures a solid grip, even when the knife is covered with blood, fish slime or the nasty goo associated with butchering.

Sheath: The leather sheath is well-designed, and perfect for a knife of this blade shape. The sheath is designed so the blade leaves the leather from the front. The knife is well secured with a snap fastener, and the sheath appears to be very safe.

Warranty: All Bark River knives come with an unconditional, satisfaction guaranteed lifetime warranty. I checked out the warranty several years ago, and here is what I found.

Made in the USA: All Bark River Knives are made in Escanoba, Michigan, by skilled American craftspeople. These folks, and the company, pay local, state and federal taxes, and contribute to their community. Buy American! Shop locally and support American small businesses!

Do you need a Fingerling?

The little knife is growing on me. My EDC belt knife generally has a three-to-four inch blade, and a generous handle. I regularly carry the L.T. Wright Next Gen, Kellam Hawk, a Battle Horse Knives Feather Stick or a BR Gunny.

The Fingerling is so compact, I forget it’s on my belt. I can easily get in my car and fasten the seat belt (My Litmus test for knife convenience and portability!) The Fingerling is bound to be a superb small game knife, and it will easily fit in my deer hunting daypack.

As ticky and nit-picky as I can be on knife reviews, I couldn’t find anything to complain about on the fingerling. The handle and blade designs are not my favorite, but that is strictly personal preference. There is no question the Fingerling is a useful, compact design.

I predict Sharpfinger aficionados will snap up the Fingerlings really quickly, so order yours now. It could be the hunting/utility knife you’ve been looking for.