Review: Best everyday carry knife? We check out the L.T. Wright ‘Next Gen’ 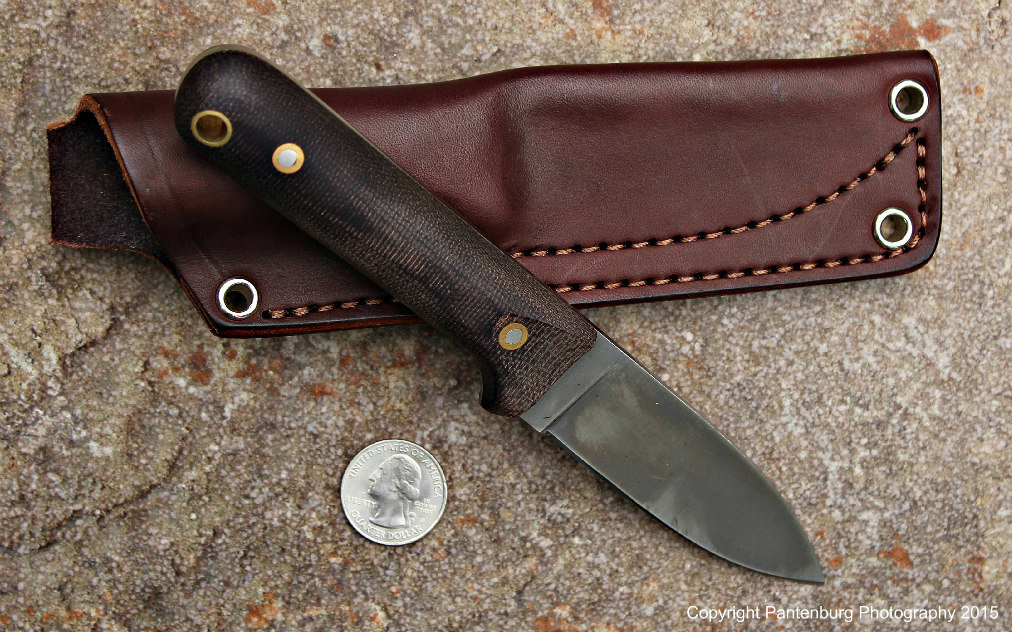 After much success with his Genesis bushcraft knife, L.T. Wright got lots of requests for a smaller version. The result is the “Next Gen.”

Disclaimer:  I bought this knife and was not paid for writing this review.

I carry a knife every day. Which knife depends on what I’m doing. For work in the college office, a Swiss Army Classic can cover most tasks. (My car’s emergency bag has a solid sheath knife in it.)

But if I’m going to be in my wilderness office, knife choice is a lot more specific.

I want a rigid blade, with a blade between three to five inches. The steel, handle and sheath are all important. And it has to be handy and convenient to carry.

So I was really interested in the Next Gen, the latest offering from L.T. Wright knives. 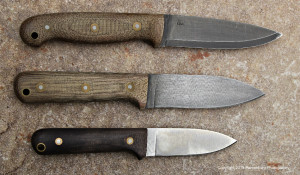 The Next Gen is designed to be “the knife you’ll want to have with you all the time,” according to the L.T. Wright website. It’s faster-handling than the Genesis or GNS, the company claims, and the Next Gen can handle camp-kitchen duty, game prepping in the field, or the unexpected survival situation.

It owes much to its larger relatives: Resiten scales, chemical and mechanical joining of the scales to the steel, thumb scallops to aid in fine work, and a robust handmade sheath.

I test knives by using them. If I like them, they may go on training sessions. The Boy Scouts are particularly rigorous testers, especially if they’re learning survival firemaking. Last year, the Marion County (Oregon) Search and Rescue Team provided some really valuable input about what a first responder needs in a knife. In September, I’ll be working with the Central Oregon “Women in the Outdoors” program again, teaching survival firemaking and quick emergency shelter building.

Here’s what I found out after using the Next Gen:

Point: The next Gen has a spear point, which is a good choice for a belt knife. My favorite is the clip point, but a drop or spear point are generally more versatile for a do-it-all knife.

Handle: The most common complaint about knives I hear is that handles are too short. I loved the L.T. Wright Patriot, which came out last year, but the handle was just to small for my large, working man hands. I tried and tried to get used to it, to no avail. 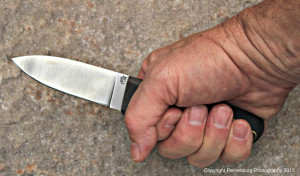 The Next Gen’s realistic-sized handle allows me, with my (glove size) large hands, to use it comfortably and safely.

To quote me in the Patriot review:

I like to think L.T. paid some attention to my complaining, because the Next Gen has a comfortable 4-1/2-inch handle. That means people like me can use this knife hard. I’m learning how to carve wooden spoons – it’s a great activity next to a campfire – and extended whittling sessions have revealed no hot spots.

Thankfully, other high-end knife makers are also  paying attention to their ham-handed customers. Lon Humphrey did, with his Sterling series.  Bark River Knives’ latest incarnation of their ever-popular Fox River II now has a 4.67 inch handle.

The handle on my Next Gen is micarta. My experience is that the material gets “grippier” when wet with water, blood, fish slime or other outdoor-associated goo. A well-designed handle – which the Next Gen has – is inherently safe. The micarta makes it safer.

Blade Thickness: I like thin blades. They work better for cutting, slicing, skinning and wood carving. In almost a  half century of  hunting, fishing, backpacking and outdoor work, I’ve never broken a blade. And with today’s super steels, I don’t see any reason for a thick blade. The 1/8-inch thickness is a good compromise. It’s strong enough to work as a pry bar in a survival situation, but not too thick to be useful.

Steel: This is my first knife in D2 steel and I’m liking it. D2, according to Bob Dozier Knives, is one of the most outstanding knife steels available today. D2 is a high carbon, high chrome tool steel which is often used for the steel cutting dies in tool and die shops. With 1.5% Carbon, 1% Molybdenum, 12% Chrome, and 1% Vanadium, this air hardening steel takes a razor edge, and holds it!

I used the Next Gen to cut open bags of gravel and trim sod as part of a backyard project. (I test knives by using them for whatever project happens to be going on.) Cutting sod will dull any knife, and this was no exception. The Next Gen’s edge held up really well though, and it never got so dull as to be unsafe. Touching it up with a strop soon restored shaving sharpness.

No choil: I owned one knife with a choil, and bought it to see if I was missing something.

The choil, I’m told, allows you to “choke up” on the blade to do fine work. IMO, all a choil does is remove the most useful part of the carving edge, which is right next to the handle.

Think abut it…  I’m supposed to put my trigger finger right next to a razor sharp edge, negating the built-in safety factor of the handle, for better control of the blade? (Here’s another excellent, similarly-sized knife.)

I would rather research and buy a better-designed knife for anticipated tasks. I’ve never seen a knife in a museum with a choil, and I think they are a fad. Hopefully, this fad will die out soon.

The Next Gen sheath is sturdy and secure. I wet formed the leather.

Sheath: The Next Gen comes with a sturdy leather sheath that secures the knife safely. It rides well on my belt, and I can wear the Next Gen comfortably and fasten my seatbelt while driving.

On another note, the squared-end is good urban camouflage. To the casual viewer, the sheath could be carrying a pliers or other tool.

Spine: The spine is ground at a 90-degree angle, like an ice skate. This means you can scrape a ferro rod with it to start a fire, or use that edge to shred tinder or process kindling.

Warranty: Every L.T. Wright knife comes with a lifetime warranty.

Made in the USA: All L.T. Wright knives are made here. That means Americans are making a living wage, paying taxes and contributing to their local community. Support American small business!

The Next Gen will make an exceptional camp knife, and it may just become your new favorite do-it-all, every day carry blade. 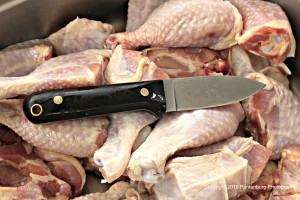 The handle on this Next Gen never got slippery, even after processing about 80 pounds of chicken.

The rest of the story:  So I volunteered to help grill chicken and hotdogs for the 300 or so people who attended the Azure Standard company picnic in The Dalles, Oregon. There were 100 pounds of chicken served. Of those, 80 pounds of quarters had to be cut apart. Nobody planned on having to do the extra meatcutting, so nobody had a proper knife.

Except me – I had my Next Gen. I opened all the boxes, cut open the packages, then (after washing and sterilizing the blade) cut up the chicken. The micarta handle got “grippier” during use, even though it was covered with chicken fat, water and the slippery fluids associated with raw chicken. And I was wearing food handler latex gloves.

At the end of the several-hour task, that Next Gen was still shaving sharp!!!!