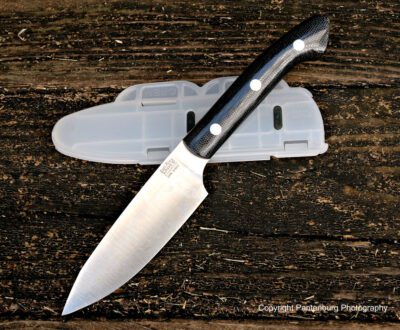 My knife testing generally starts in the kitchen, since that is where most people use knives. In some instances, you can tell right off the bat that the blade is not going to work for food preparation.

In others, the knife might work so well that it never gets out of the kitchen.

Disclaimer: I did not get a free knife to use in this review. Knivesshipfree.com and DLT Trading are Survivalcommonsense.com affiliates, but nobody had any input into this review. All I ever promise is a fair shake.

Case in point – my Bark River Kephart with a five-inch blade. My wife took one look at the knife when it came out of the box and appropriated it to become part of the permanent kitchen collection. There is remains, getting regular use. Come hunting season, it gets used on venison. 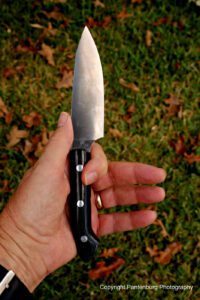 The Petty Z is a well-designed knife for outdoors and inside use.

Historically, the difference between kitchen knives and hunting or fishing knives have been blurred. Before the Industrial Revolution, most knives were handmade. Steel and labor was expensive and a family might only have one or two blades that had to do everything.

Consider that American icon, the Bowie Knife. The original that Jim Bowie made famous in the Sandbar fight was a breaking knife, used for butchering and processing large animals. Today, the Bowie’s most common relative is a 10-inch butcher knife, with a carbon steel blade and wooden handle. You can get one for under $40 at most hardware or box stores.

Point being, knives designed for mainly kitchen use can also be useful outdoors, and vice versa. The Bark River Petty Z is going to work very well in both worlds.

Here are the Petty Z specs, courtesy of Knivesshipfree.com

Handle: My Petty Z was ordered with a black micarta handle so it would match the other knives in our kitchen. There are a variety of handle materials available, including some gorgeous wood. I anticipated the Petty Z would be a hard-used, working knife, and for that, my favorite handle material is micarta. The material is tough and virtually bulletproof. The handle design is great for the pinch grip chefs use.

Steel: The CPM-S45VN is the new kid on the block. S45VN is a new powder metallurgy stainless steel being produced by Crucible that has just been announced. Vanadium forms very hard carbides which contribute to wear resistance, and the use of powder metallurgy keeps the carbide size small for good toughness.

The edge has held up very well under normal use, and it appears to be easy to maintain the blade sharpness.

Point: The drop point is a good choice for this knife. The point is centered, which would be great for drilling into wood. It also would be good for piercing.

Blade design: The blade has the classic Canadian leaf style, which is one of my favorites. The edge is lower than the handle, making this a safer to grip with wet or slippery hands. This becomes a big deal when gutting or skinning a big game animal, or food preparation.

Blade thickness: This knife is designed for cutting and slicing, and the .085 thickness makes it cut like a laser. With the quality CPM-S45VN steel and a WHAT blade height, the blade doesn’t need thickness to be sturdy. Besides, this is not a knife that will be used for batoning firewood, prying open ration boxes or stabbing bears. But I’ll bet it would work just fine for cleaning fish. It would also make a good skinning knife. More on that once deer season starts.

Grind: The steel has the classic Bark River convex grind. As far as I’m concerned, convex is the best grind for any knife task. The efficient grind is one reason the knife slices so well.

The knife doesn’t come with a sheath. For a kitchen knife, this is no big deal since the blade will spend most -if not all – its life in a drawer or block or on a magnetic knife strip. But if the Petty Z goes to camp – and it will – the edge needs to be protected. A sheath can be improvised, or the sheath from another knife can be used. I have a collection of such items, and can usually find one that will fit the blade. 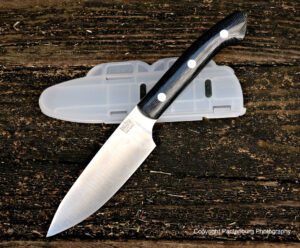 A plastic blade guard protects the edge and the user.

But if you’re a not a knife nerd, another option might be a snap-shut plastic blade protector. Since I generally carry my knife in my daypack, this system would work well for my hunting, fishing and woods rambling needs.

The Petty Z is a unique blend of outdoor/kitchen knife that can handle jobs in both worlds with ease. Mine is already on regular use in the kitchen, and there is no reason to think it won’t work equally in a hunting or fishing camp.

I really like the concept of combining functionality and practicality in a knife design. That makes the tool attractive, as well as useful. That also means the knife will be used a lot, and there is no better endorsement. My Petty Z will be used a lot!