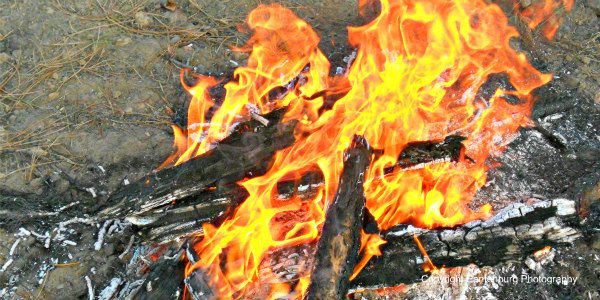 The following is a paid public service message.

As a prepper/bushcrafter/survivalist, you may be familiar with the idea of starting and maintaining campfires. You probably know how essential fire is for cooking and providing warmth in emergency situations. But what about fire safety?

Fire is your friend in a survival scenario when you practice common sense fire safety habits. By the same token, there are certain bad habits that are risky – and the risks are very real. According to the UK government’s Countryside Code guidelines for fire safety outdoors, a fire can destroy a tent in under a minute.

In England alone, some 27,000 fires are started annually in areas away from cities and towns. RVs and trailers catch fire at an average rate of about 360 per year. The fact is that fire should never be played with. It should always be treated respectfully even among survivalists serious about honing their skills in protecting themselves.

In reference to the previously mentioned fire safety bad habits, here are five that put you at risk:

The worst of the bad habits among survivalists is not being prepared. By our nature, preparation is something we put a lot of stock in. As long as we are preparing for an extended emergency by stocking up food and water, we might just as well prepare for possible fire emergencies. How do you do that?

First of all, make plans to secure water that can be used to extinguish a fire. This obviously doesn’t have to mean clean drinking water. It can be water from just about anywhere. Second, invest in a couple of fire extinguishers for outdoor safety. A fire extinguisher will not get you very far in a major incident, but it could keep you from burning down your temporary shelter.

Bad habit number two is building uncontained fires. At the very least, campfires should be contained in some sort of pit surrounded by rocks. The idea of containment is to prevent a fire from gradually spreading beyond its perimeter. Containment does not have to be anything elaborate or complicated. However, it is necessary. A fire without containment is an open invitation to serious problems.

Careless smoking is one of the leading causes of residential fires. It can be equally problematic outdoors. If you are a smoker, be very careful about how you discard your smoking materials. Be careful how you use them as well. A lit cigarette may seem completely harmless, but it can easily start a fire if fuel is available.

When smoking outdoors, be very careful not to allow burning embers to fall on the ground. Embers should be addressed by disposing of them in some sort of container. Next, never throw a burning cigarette on the ground in hopes of extinguishing it with your foot. Doing so only increases the chances that you will accidentally start a fire. And of course, never leave matches or lighters lying around.

Any flammables, both solid and liquid, in your camp should be stored well away from the fire pit. Anything that could easily catch fire from a stray spark needs to be kept at a reasonable distance. When possible, store those materials upwind. Doing so reduces the risk of stray embers igniting a fire.

5. Not Keeping Your Distance

Once a campfire is established, keep your distance except when adding more fuel. Leave enough room between you and the fire to avoid stray embers. When you do add fuel, be quick but cautious. Never stick your hand directly into the fire and never get close enough to allow your clothing to ignite.

We tend to not give fire safety as much thought as we ought to. As helpful as fire is, it is also dangerous. It demands to be respected. Do yourself and your family a favor by avoiding these five fire safety bad habits. You will all be better off for it.