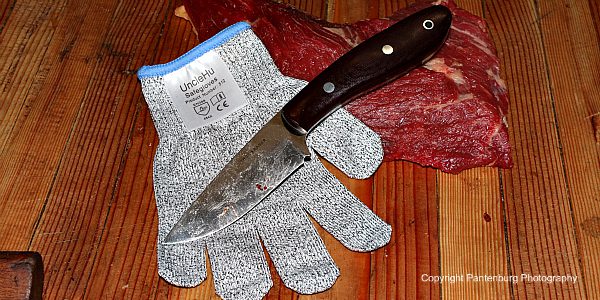 The best way to avoid cutting yourself is to practice safe knife handling techniques. The second best idea may be to wear a cut resistant glove.

It was a bad ending to a near perfect day of deer hunting.

Several deer had been harvested, and we’d spent much of the afternoon skinning, quartering and boning out the meat. 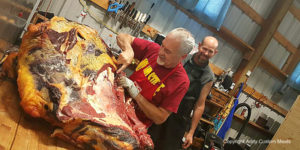 Eric Addy supervises my knife work on this Longhorn. I was wearing a cut proof glove on my left hand.

Right at the end of the third buck, my Buck folder had gotten dull, I was tired, and the light was fading quickly. Rather than stopping to touch up the edge, I decided to power on through, and re-sharpen everything when we got done.

You know the rest of the story. My knife slipped, and almost cut the tip off my left middle finger. Everything stopped while I got first aid and stopped the bleeding.

In addition to the pain, that knife cut also affected my income. I was playing bass in a band at the time, and had to cancel a gig that weekend. And my typing was really slowed down.

Hunters and fishermen need to consider adding a cut resistant glove to their gear. Cut your hand while processing an animal in the back country, and you’ve created a survival situation. Grab a catfish wrong, and you get severe puncture wounds. If any of these wounds get infected, you’re in a world of hurt. Bushcrafters doing a lot of woodworking could also use hand protection.

Cut resistant gloves provide protection against sharp objects such as glass and sharp metals. Cut resistance is a function of a glove material composition and weight (ounces per square yard), according to the eSafety Supplies website. 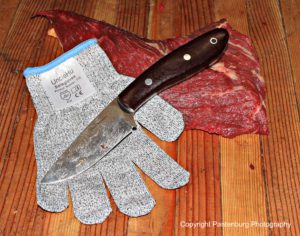 I learned about these gloves while working with Addy Custom Meats. (The pros there are kind enough to let me help them while testing knives.)

Company co-owner Eric Addy tossed me a cut resistant glove to wear when we started working on a Longhorn cow recently.

I was so impressed after wearing one for an afternoon of breaking beef, I went home and ordered a pair. These gloves will be added to my hunting daypack.

Here’s what to look for:

Composition: Cut protection can be influenced by the factors noted below. The more of these factors that can be engineered into a yarn, the more resistant it will be. Here’s some info from the eSafety Supplies website:

Safety ratings: To quote eSafety: ASTM F1790 (The Standard Test Method for Measuring Cut Resistance of Materials Used in Protective Clothing) measures the amount of force (in grams) applied for failure to occur at one inch (25 mm) of travel for a standard cutting blade. The higher the value, the better the cut performance. The performance rating is classified by ANSI/ISEA 105-2005 from 0-5 level based on the outcome of the Cut Performance Protection Test. For example, a CPPT with 1200 gm of force would indicate a performance level of 3 based on the chart below.

Do you need a pair of these gloves?

YES!!!! You can order at eSafety Supplies

There is no substitute for safe knife handling, but accidents happen. Let your attention get distracted, or your knife slip and you are suddenly in a bad situation.