Review: Cold Steel SRK knife has worked for me for 20+ years 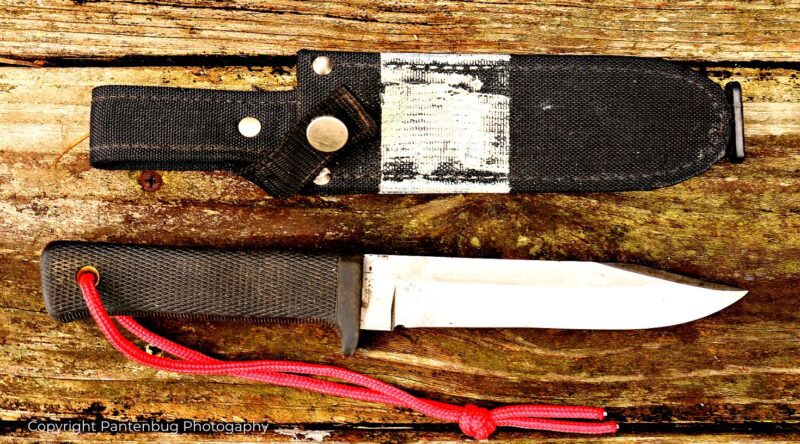 For more than 20 years, a Cold Steel SRK was my main hunting/survival knife. It is a survival/bushcraft tool that can be relied on.

I bought my SRK in Boise, Idaho, shortly after moving there in 1990. The plan was to hunt elk and deer every year, and my gear needed to be upgraded after living on the east coast for several years. The upgrades included a weatherproof rifle, better boots and a hunting/survival knife. 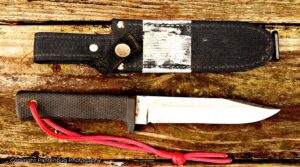 My SRK is a sturdy, reliable tool. It has never let me down.

Back east, I carried a folding Buck hunter that was used to gut and skin many whitetails. It worked well, but a more durable knife as needed in the backcountry.

A folder’s weak spot is the hinge, and accidentally breaking my knife in half could cause problems ranging from annoying to catastrophic. I decided to go with a rigid blade for the reliability. 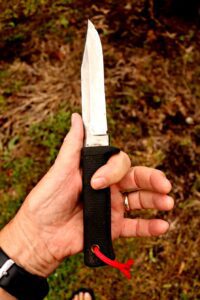 The SRK’s handle is long enough for most users, and the handle material offers a secure grip.

My SRK came from at a Boise cutlery shop, and I immediately had them take the off the  black paint on the blade. Then the blade was re-ground to convex. Both alterations were easily done, and greatly improved blade performance.

This knife went everywhere, in widely-divergent environments. On one elk hunt on the Idaho-Montana border, the temperatures got to near zero. The knife handle stayed soft-ish and use-able. On another elk hunt, the temperatures got into the 90s.  The weather can’t be controlled, so the only option is to get the best equipment you can afford to cope with it.

My SRK has probably field dressed 50+ deer (it was loaned out a lot) and been used on several elk. It is a superb tool for beheading fish. And several kids have learned how to whittle wiener sticks and make feather sticks for firestarting with it. In fact, there was no plan to replace the SRK until I discovered Bark River Knives in 2011. (I don’t work for Bark River, and I don’t get free knives from anybody.) Since then, the SRK has been honorably retired to my gun safe, while the Ambush Tundra or BR Bravo LT 1.25 are taken into the field.

Blade thickness: At .197-inches, this is a thick blade. I never worried about breaking the knife, but on the other hand, I don’t worry about breaking blades. With today’s quality steels, it would take outright abuse or deliberate misuse to screw up most blades

Steel: My SRK says “high carbon steel” on the blade. Despite removing the coating, there has never been a problem with rust. Today, a SRK can be ordered in a variety of steels, depending on how much you want to spend. There is a model available in CPM-3V, which takes the SRK to a whole new level of quality.

Handle: One of the attractions for me is the SRK’s generous, comfortable handle. The handle is  4-3/4-inches long and made of  Kray-Ex. This material stays soft-ish, despite cold temperatures. It also doesn’t get slippery when wet or covered with blood and goo from field dressing a big game animal. There is a semi-guard quillon on the handle to keep your hand from sliding onto the blade, but I’ve never found it necessary.

Point: The SRK has a clip point, and that configuration is one of my personal favorites. A clip with a swedge, IMO, is one of the most useful points for virtually everything. Here is how to pick the best point for your needs.

Sheath: My old SRK came with a heavy duty nylon sheath, and it has worked out very well. Unlike leather, the nylon sheath doesn’t hold in or attract moisture. My SRK has been stored in the sheath ever since I got it, and rust has never been a problem.

The modern SRK sheaths are made of Secure-Ex®, a material that looks like Kevlar, and the sheaths secure the blade well.

Cost: Back in the early 90s, the selection of hunting knives was not nearly as extensive as it is today. I needed a reliable blade that wouldn’t break the bank. I also had a wife and three small kids who rated higher on the family budget than my gear. I paid about $50 for the SRK, which was affordable at the time. Today, a SRK will cost between $130 to $259, depending on the steel. This is affordable for most of us. Order your SRK here

As much as I love the SRK, there are a few tweaks that would make it a better hunting knife. In fact, I almost had my original knife re-ground.

If you agree with these suggestions, the  solution is simple: Buy a Cold Steel Master Hunter. The Master Hunter has all these improvements. Get yours here.

So do you need a SRK?

There is a special place in my heart for outdoor gear that works. These items include my Ruger .22 rifle, Danner boots, 7mm-08 deer rifle, Bark River Sportsman fillet knife, my Buffalo Wool socks and my Cold Steel SRK. There are many, many hunting /survival knives on the market, and picking the right one for your needs can be confusing. But for a low-cost user, it would be hard to beat a Cold Steel SRK.