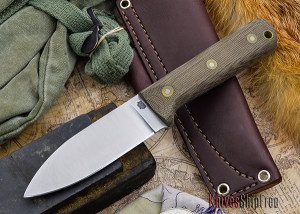 I will sometimes make a scoutmaster a good deal on a quality knife.

My former L.T. Wright Genesis, that is now in the capable hands of an active scoutmaster, proved its worth on a scout river trip.

The knives I review must sometimes be sold to pay the operating expenses of this website. There are several that won’t be sold, but one of my keepers now belongs to a hard-working scoutmaster.

The screaming-deal, you-can’t-beat-this, scoutmaster-only bargain price I gave to scoutmaster Matt Banton on my L.R Wright Genesis came with some provisos. Among them, is that the knife will be used to teach scouts, and that if an interesting story comes up along the way they let me know. After we sorted through my inventory, Matt  narrowed his choices down to two: the Battle Horse Knives Feather Stick and the L.T. Wright Genesis.

This is a note Matt sent me after his Genesis was used to make some backcountry emergency equipment: 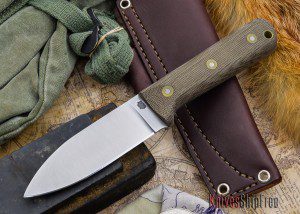 The L.T. Wright Genesis is based on the traditional Kephart design, that goes back 100+ years. This one has a green micarta handle.

Leon, the legend lives on. A few weeks ago, I went on a 42 mile float trip on the Grande Rhonde River in NE Oregon with 14 scouts and scout leaders. We had an excellent time and the trip was amazing. Naturally, I had my Genesis that you sold me the entire time.

Unfortunately, late on day one, my son, an eager Second Class scout, tried to stop our 1,000 lb raft with his 12-year-old legs when we were coming in hot to do an emergency pit stop to help another boat full of scouts in our party. He buggered up his ankle quite badly. Bad enough that I thought he may have broken it or done some serious damage.

Once we made camp, I realized that carrying him around camp the next few days was not going to work for either of us. I had to make him mobile. Even with his injury, we were going to have a good time. (Matt, and most of the adult leaders in the Fremont District scouts, are trained and certified Wilderness First Aid graduates. A WFA certification requires graduating from an intensive 20-hour first aid and emergency response course. A WFA trained adult is required to go on any scout wilderness trip.)

Next thing I did, once dinner was underway, was go to the edge of our camp, pick out some nice green alders and cut them down. This was not without sacrifice as I happened upon a hornet that let me know seven times that I was not welcome near his home. 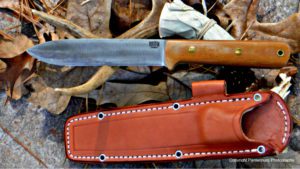 This Bark River five-inch Kephart is another superb backcountry knife.

Once I recovered from the initial pain of the hornet’s nasty reminder, I set to work building Wyatt one of the coolest set of crutches ever seen on the Grande Rhonde. I made sure to use my awesome LT Wright Genesis in full view of all of the scouts as I bushcrafted the crutches. (Here is another excellent Kephart-design knife.)

I was determined to build a useful solution to my son’s woes and boost his mood by helping him get back up and moving around, but I also wanted to show the boys that with the “Wright” tool, you can build anything, anywhere. The boys circled around and watched as the crutches came together over the next few hours. The crutches were lashed tightly with paracord and made so strong that one of our scoutmasters, who weights in around 225 pounds was easily able to take them for a spin.

Two days later, Wyatt had motored around on his crutches long enough to allow his ankle to recover and rest. The damage ended up being minimal and was little more than a bad sprain, but he was back to doing flips on our trampoline within a week.

Thanks again for the knife. I haven’t even looked for another since I bought it from you. It’s the only primary backcountry tool I need and it serves its purpose perfectly.