After the two-day Mississippi deer hunt, my friend Buddy Douglas was displaying the tenacity some would call “Pig-Headedness.” Despite my repeated efforts, Buddy would not accept a cent for food or drink, nor would he let me pay my guest fee at his hunting club. 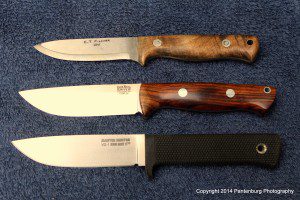 Southern hospitality, you must understand, is a very real tradition to many Mississippians, especially as it relates to whitetail deer hunting. We were raising our voices.

“The deal was NEVER that you would pay for everything, even if this is your hunting club,” I reiterated. “Damn it, Buddy, you’re about to piss me off!”
“You’re my guest,” he stated again. Buddy was starting to get a little red around the collar. “And you’re not the only one fixin’ to get pissed off!”
I dropped the subject. Later, I sent Buddy a Cold Steel Master Hunter. While a southern gentleman might not accept payment for taking a friend  hunting, neither would he insult that friend by refusing a gift. Buddy loves the knife!
by Leon Pantenburg
I’m a long-time user of Cold Steel knives. Since I bought my first, a SRK, back in 1991, I’ve used the product line extensively. That SRK (the initials stand for Survival Rescue Knife) is still one of my first choices for a survival/hunting knife.

The Cold Steel Canadian Belt Knife is a great choice for skinning and camp chores.

And I like the Cold Steel Canadian belt knife for cleaning small game, chopping potatoes and onions  and trimming fat and gristle off meat. It’s also a good skinner on many parts of a big game carcass. (But, I’d like the Canadian belt knife better if the handle was made of Kraton and bigger in diameter!)

First, my criteria. My qualifications for any survival knife are based on prejudice, use and experience.

Briefly, my hunting and survival tool must be a strong sheath knife with a sturdy blade. No folders or gut hooks. The blade should be between four to six inches long, and made of a steel that is easy to sharpen, but that will hold an edge well.

I test knives by using, not abusing them.   In all my knife testing, the implement must first  pass the kitchen test. The knife is used for everything a kitchen knife might be used for, including spreading peanut butter, slicing bread, peeling things, etc.

Then, if possible, the  knife is used for butchering and field dressing elk or deer. (I used the Master Hunter to skin a cow elk, and it worked fine! )  The Master Hunter passes all my quirky survival knife tests with flying colors.

So, IMO, Cold Steel makes a very good knife for your survival and hunting needs at a reasonable price and you can narrow your choices down to the SRK and the Master Hunter. But you will have to decide.

But there are a few differences that only knife enthusiasts would consider:

When my cousin, Marion Fitzgerald, came west to hunt elk with me and my brother Mike Pantenburg in  1993, I recommended he buy a Master Hunter. For what Marion was looking for – that is, a solid hunting knife that would also be useful back home in Nevada, Iowa – the Master Hunter was the best choice.

I don’t claim to be a wilderness survival expert, but I know what equipment works for me in the backcountry.  The Master Hunter  will serve you well.