In an instant, the backpacking trip in Idaho’s Sawtooth Mountains turned from an idyllic family outing to every parent’s nightmare.

One moment, my son Daniel, 16 months old at the time, was playing around the campsite. In the next, despite the close supervision of four adults, he had vanished. 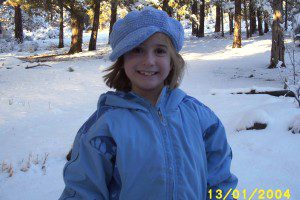 Though warmly dressed, this youngster would be hard to find, and is ill-prepared for being in the winter woods.

The adults immediately split up to search for Dan. I sprinted toward the lake, while my wife, Debbie, ran the other way, up the hill. Out of the corner of her eye, Debbie caught a flash of Dan’s bright red jacket as he disappeared over the rise. She collared the would-be wanderer, who thought the chase was part of a game.

We took Dan on his first backpacking trip when he was five months old. Debbie carried him and all the paraphernalia associated with an infant, and I carried all the camping gear.  When my brother, Mike, went backpacking with us, he and I would split the weight up. We didn’t go far, but we still managed to get back into the mountains, away from most of the crowds.

Infants are easy to take along, as long as you have properly prepared their gear. They can’t wander off, and a tarp in the sunlight, along with some favorite toys, quickly turns them into happy campers. And talk about fantastic  memories!

The difficulty starts when kids reach the toddler stage and before they’re old enough to go to kindergarten. Kids in this age group have boundless energy and curiosity, no concept of danger, and a near suicidal lack of  common sense. By the time children reach kindergarten age, they are generally considered old enough to be taught. But if you’re taking a little kid into the backcountry, plan on spending all your time on full alert.

Here are some steps to make your child as safe as possible, and outing preparation should start long before you arrive at the trailhead. These tips have worked well with all three of my children:

* Always dress kids in bright clothing. Soft, muted earth tones or black or white jackets are like camouflage, and the youngsters should be highly visible at all times. You may want to take along some fluorescent duct tape and/or flagging and attach it to the youngsters so they will be even more visible.

* Permanently attach a whistle on their coats or somewhere it won’t be lost. Explain that the whistle is always to be carried with them and only used if they get separated.

* Teach them (and practice) the drumming game: Teach the child that if separated from the group, find a tree and a stick and start hitting it to make noise. Blow the whistle as part of the game.

* The usual rules about not talking to strangers are suspended if the child gets lost in the wilderness. Explain that there will be many nice people trying to help find him or her, and these searchers will know the child’s name. You don’t want the child hiding from rescuers. Re-enforce this idea as you hike, so they don’t forget.

* Keep them hydrated and fed, even if separated from you: Dehydration in the wilderness is a danger to anyone. For youngsters, especially, it can be deadly. My kids each had a bladder-style hydration system, which work well. The novelty of  being able to drink out of a drinking tube will last for a while, and since the system is carried like a backpack, the child probably won’t lose their water.  If the child is lost, it may take several hours to find them, and they will need to drink. It’s also a good idea to put snacks in the backpack part of the bladder backpack, so the child learns to look there for food.

* Teach the children that if they get lost or separated, to sit down, stay put, drink water and eat their snacks.

* Look bigger for searchers: Your waiting space, if possible, should be near an open space. Blow your whistle if you hear or see anybody!

* Don’t lie down on bare ground.

* Stay away from large rivers and lakes.