SCS Pantenburg is the best hunting knife for me 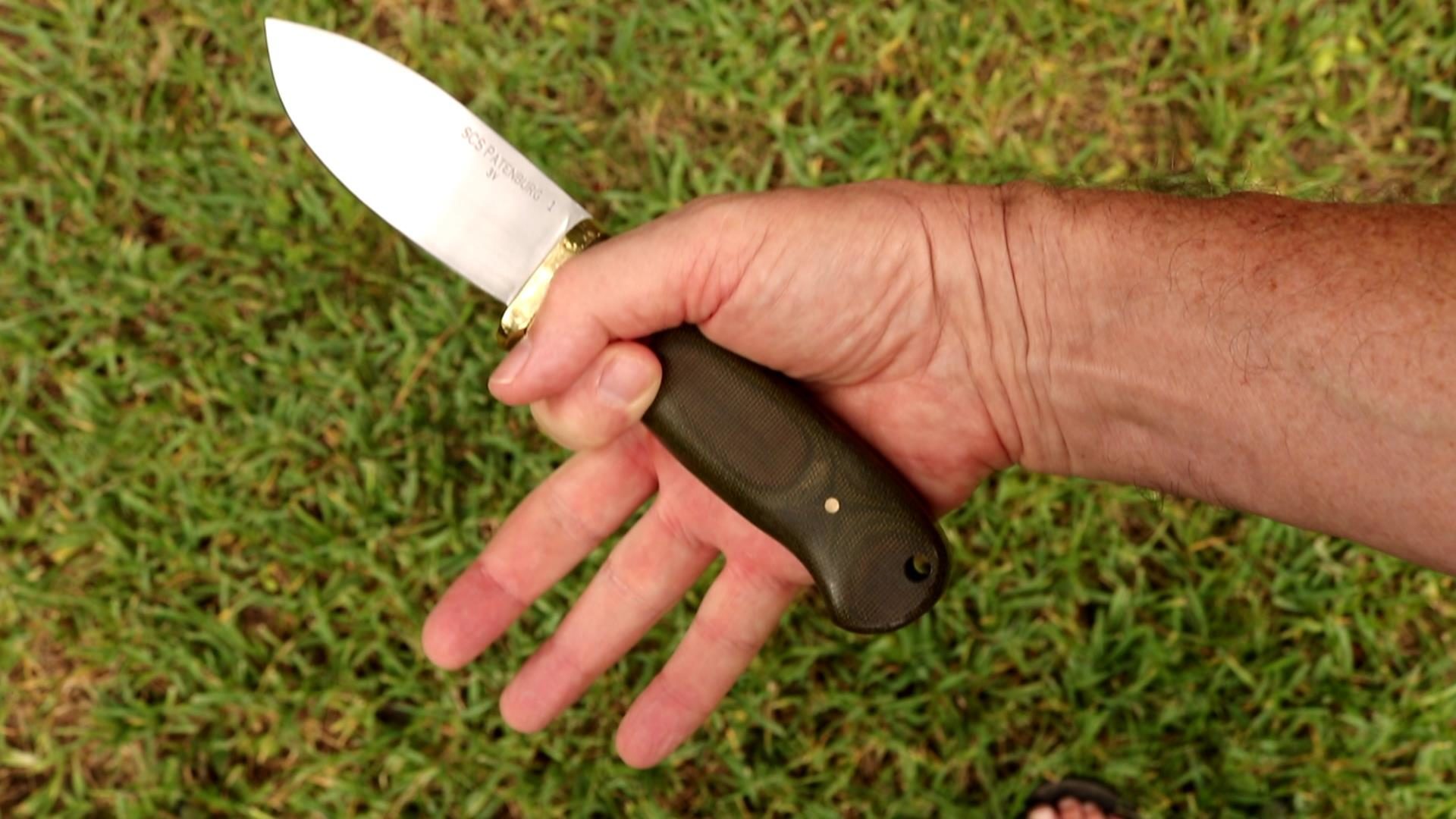 I have not “needed” another knife for decades.

But I couldn’t resist when Jesse Hemphill  told me “Design your grail knife and I’ll make it.” Here is what we came up with.

Disclaimer: I did not get a free Jesse Hemphill knife for this review. Jesse had no input in the review, and neither did any of the Survival Common Sense sponsors. All the opinions expressed in this review are mine.

Every knife enthusiast has a pipe dream about their dream (“Grail”) knife, that would be exactly what he/she wanted. 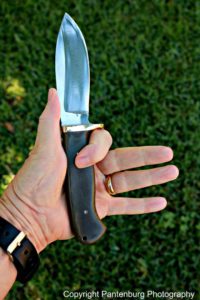 The SCS Pantenburg is my “grail” hunting knife, made to my nit-picky specifications.

A few months back, Trish and Jesse Hemphill and I were visiting via Facebook.  They asked what knife would I design for my personal use? (I certainly make my cutlery opinions known!)

I have the utmost respect for Hemphill knives, and felt honored (and, I must confess, a little intimidated!) when Jesse invited me to design one. I have used many Hemphill knives while deer hunting, and every Hemphill is a unique combination of beauty, durability and usability. Besides – Jesse is going to be on “Forged in Fire” on August 15. Talk about a knife-making resume!

But pretty doesn’t keep me from using Hemphill knives for their intended purposes.  I used a Town Creek 2 and one of Jesse’s Custom Damascus knives for gutting and skinning deer. My Gator Breaker Bowie was used to skin an alligator. There are a couple other Hemphills in the field test queue. That conversation started a wonderful project.

But down to business: Nobody’s grail is going to suit everyone. One size doesn’t fit all in hats, shoes or knife handles. Here are some of the things I wanted in my grail knife.

It would be used primarily for deer and elk hunting. But I also teach wilderness skills on the lower Mississippi River (see Big River Wild Adventures), and the knife had to be good for bushcrafting and various survival tasks. This particular grail knife would not be the best for fishing, though it will probably be used as a bait cutter. It would also have to be good for woodworking.

I want a thin blade, convex ground, with a generous handle. I have big hands, and I frequently wear neoprene and cut resistant gloves when field dressing animals. The knife could also be used in cold conditions, where gloves are needed to prevent frostbite. I want a generous handle, like found on a hammer or hatchet.

I sketched out my knife. It had a blade that closely resembled the Ambush Tundra profile, only thinner. The handle was fatter, and the blade is a little taller. Trish suggested the name – it was named the SCS (Survival Common Sense) Pantenburg.

Full Tang Blade: Every survival knife should have a full tang, IMO, because that is the strongest option. This knife needs to be strong because of wilderness survival tasks that might come its way.

Useful spine: The spine is ground at 90 degrees, like an ice skate. That allows for shredding tinder or scrapping a ferro rod to make sparks if necessary.

Drop point: The drop point is superb for a hunting and bushcraft knife. It is among my favorite points.

Quillon: This small brass quillon looks classy and adds an additional layer of safety to knife use.

Made in the USA: Jesse Hemphill is a skilled American craftsman, and pays local, state and federal taxes. When you buy one of his knives, you buy a piece of art that is also one hell of a user knife. Buy local, buy American!

I like everything about this knife. (I should!)  But my use and endorsement of the Ambush Tundra is well documented. 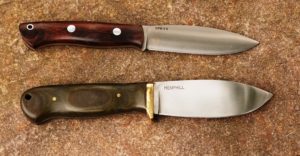 The SCS, bottom, resembles the Tundra but has several important differences.

Frankly, for a hunting knife, you won’t do much better than an Ambush Tundra or a Bark River Bravo 1.25 LT. I’ve used both models extensively, and improvements on either would be hard to come up with. I like the Tundra so much I own three. Same thing with the Bravos – at one time I owned four and still have a 1.25 LT and the Bravo LT.

You heard it here first folks – combine a Bravo handle with the Tundra blade, and the result will be a superior hunting knife! This would be the knife I make if I ever get to go to a Bark River Grind-in. C’mon DLT and KSF! You dealers can do this!

Here is how the SCS differs from the Ambush Tundra. 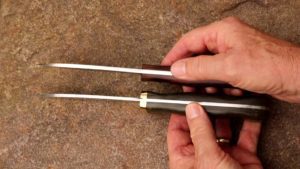 The SCS, bottom, has a thinner blade than the standard Tundra.

Do you need a SCS Pantenburg?

Well, I do. After decades of big game and hunting use, this may be the knife I’ve been designing in my head during quiet hours on the deer stand or in the duck blind. The design was refined in the field while skinning deer and elk, and doing various bushcraft tasks. The grail knife has certainly been discussed around many campfires.

So is the SCS it? Can I quit searching for that elusive, mythological grail knife?

Nope. Half the fun of collecting and using knives is looking for the next one. The SCS may prove to be my grail hunting knife. But I still need a Grail fillet knife, bushcrafter, Mora-style and pocket knife. I’m closing in on them, but the search continues.

Jesse is a master craftsman and his pride in workmanship shows in every knife. And the Survival Common Sense website is my pet project. SCS will be 10 years old in October.  Neither Jesse nor I would put our names on an inferior, cut-rate, mass-produced knife designed to sell quickly and cheaply. The SCS Pantenburg is available through the Hemphill custom shop. For more info, contact Trish and Jesse Hemphill here.  Please tell them you saw it on Survival Common Sense!