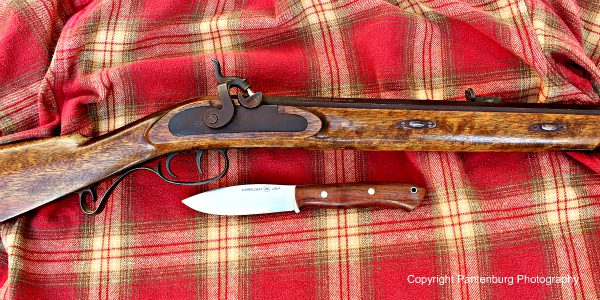 My latest knife collaboration combines an Ambush Tundra blade with a custom walnut handle by Pete Winkler. It is sooo cool.

(I did not get a free or discounted knife for this project. Knivesshipfree.com is a Survivalcommonsense.com sponsor, but neither KSF, Bark River Knives nor Pete Winkler had any input in this review.)

The best place to look for a trophy buck is the last place you’d want to pack one out of.

That’s what I told myself, while trying to move quietly through the underbrush. 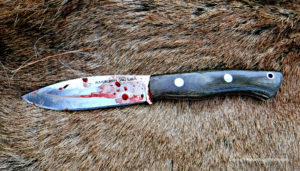 The standard Tundra micarta handle is well-designed and gets tacky when wet.

I was in a brushy, overgrown ravine in Warren County, Mississippi, hunting with my .50 caliber Lyman Great Plains blackpowder rifle, and looking for that monster buck. (One item on my bucket list is to harvest a really nice Mississippi buck with a blackpowder rifle.)

There were rubs, plenty of scat, and I’d already come across a bed. The buck wasn’t around that day, but I did find a huge, beautiful walnut log that was at least a couple hundred years old. The log had fallen down into the ravine, and was is great shape.

It had ended up at the bottom, with both ends supported. There was no evidence of rot or decay, and the trunk was still straight. I mentioned the log to the landowner. He already knew about it, but at the time, had no way to get it out. 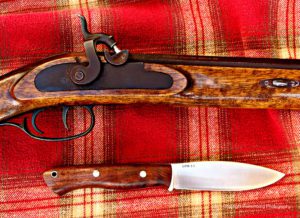 The walnut stock on my rifle and the Tundra handle match well.

Fast forward 30 years. The landowner had built a beautiful chapel, using mostly reclaimed and recycled materials. The chapel has stained class windows, reclaimed pews, a pulpit from a church that was torn down many years earlier, and other memorabilia.  The Bible on the pulpit was placed there in memory of my parents.

We were walking through the chapel, discussing an upcoming worship service, when I noticed the solid walnut flooring. The walnut log in the ravine had been hauled out, milled and some was used as flooring. Some of the wood was later used to make a coffin for Hobbs Freeman, a dear friend of us both, who died of pancreatic cancer.

I snagged a small piece of that special walnut for a project I had in mind – an Ambush Tundra with a custom handle. The wood was similar to the coloring of my Great Plains rifle stock, and I immediately thought about a matched set. (Order a Tundra here.)

The Ambush Tundra is my go-to hunting knife. I’ve used mine on deer, elk, alligator, catfish and bass and it has always performed magnificently. But knife enthusiasts are never satisfied. As great as the Aurora handle is on the Tundra’s Canadian-style leaf blade, and as much as I like it, there is always some tweak that can be done.

Needs are different from wants. In this case, I wanted the handle to be about 25 percent thicker to fit my big hands. I wanted a handle made out of that special Mississippi walnut. And I wanted Pete Winkler to make it.

Pete is well-known in the custom knife world. He does the re-handle work for Bark River Knives, and makes his own superb line of Cross Knives. In addition, he is a winner of the “Forged In Fire” competition on TV. And he is a genuinely nice guy.

The micarta was removed and the walnut was measured.

I sent my Tundra with green micarta handle to Pete with detailed instructions. A few weeks later,  the completed Mississippi Tundra arrived back, just in time to go on a camping trip. Here’s what I’ve learned about it so far.

Grind: The blade was re-ground at the BR factory from the  flat grind to a full convex. Convex is my favorite working grind, especially for hunting and fishing. My Tundra was reground after I tried three different grinds on similar knives to skin a bull elk.

I would use one knife for several strokes and then switch to another. Convex emerged as the best skinning grind, and I sent the Tundra back to Bark River to have the blade ground into a convex.

I liked the first re-grind so much, I had my other Tundra convexed. Use a convex grind in the field, and you’ll be impressed. Not only do they cut better, but sharpening is easy once you get the stropping technique down. 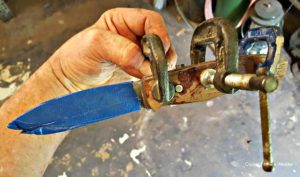 The handle is attached with Korby bolts and epoxy.

Handle: This latest modification is all about the handle. IMO, handle fit is paramount on a knife that will be used a lot.

I wanted a 25 percent larger diameter on the standard Tundra handle. This fits my hand nicely, and my finger tips barely touch my palm when holding the handle. This fit results in less hand fatigue and a safer grip

Blade: The full tang, Canadian leaf style blade shape is one of my favorites. It has it all – a centered point, superior grind and a belly that works well for skinning. As a gutting knife, the spine hump prevents puncturing the entrails when making the initial spine down, edge up cut that opens up the abdomen.

Every knife that has the potential for being used as an out-and-out survival knife should have a full tang.

Blade thickness: The Tundra’s .156 inch thick blade is about right for a hunting knife. A good hunting knife needs to be tough enough to split a deer or elk ribcage, but thin enough to slice and skin well. The .156 thickness is a good choice.

Spine: The factory grind Tundra comes with a 90-degree grind, like an ice skate. I use this edge for processing and shredding tinder. In a pinch, the spine can be used to scrape a ferrocerium rod to make sparks for survival firemaking.

Point: The drop point is a good all-around choice and point works well for all aspects of gutting and skinning. The blade length is about right for the under-the-tail work of gutting a whitetail.

Lanyard hole: I wanted the factory lanyard hole left in the handle. There are several reasons to use a lanyard with your knife, and security is right at the top of the list. I hunt heavy brush and wide open desert areas, and I’ll run a piece of paracord through the hole in the lanyard to secure the knife to the sheath.

Sheath: I am kicking around the idea of getting a custom sheath made for the Tundra, as soon as I figure out what I want. Stay tuned for further developments.

So that’s what I have so far. In the grand scheme of things, my semi-custom knife wasn’t that expensive. Pete’s re-handle work is very reasonable, and depending on the materials, well within the reach of anybody. The re-grind to convex comes under Bark River’s “satisfaction guaranteed” warranty, and costs $15 for shipping and handling.

So what’s the point?

I have not needed another hunting knife for well over 30 years. Both of my Tundras have worked exceedingly well for me, and didn’t need any modification. I also have a modified Bravo 1.25 that proved to be an incredibly efficient hunting knife. And my Kalahari and Sahara are proven performers.

I also have several hunting knives in the review queue that need to be blooded to finish the field testing.

So here’s the point. I love quality cutlery and appreciate art where form follows function. I see a particular beauty in a simple tool that has been elevated to an art form because of its utility, effectiveness and versatility,

I like combining several of these items into my outdoor experience. When one of those tools has some personal connection, that makes it even better.

Besides, I quit smoking, drinking and chasing women years ago and I don’t gamble, drive fancy vehicles or play golf. I figure the money I could spend on those vices should be invested in something productive with lasting value.

Like really cool knives and guns. Anyway, that’s my excuse, and I’m sticking with it.