Five reasons to use a survival knife lanyard 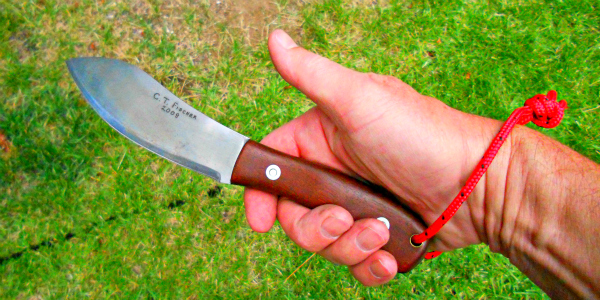 Ever wonder what to do with that hole in the knife handle, or the split ring on your pocket knife? Combine these with a piece of cord to make your knife safer. 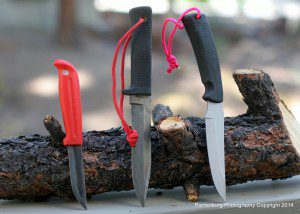 Use paracord and the hole in the handle to make a knife safer and easy to keep track of.

I traveled much of the rapids in a life jacket. Our canoe and gear was rolling and sliding through Clarno Rapids on the John Day River and headed for the Columbia River.

My wife and I had managed to dump the canoe at the head of the rapids. We were both OK, and it was not a survival situation. But I re-learned a lesson: You keep whatever equipment is secured to you. You lose what isn’t.

Among the survival tools that went into the drink was my Mora knife. It had been riding in the standard plastic sheath on my belt, which works fine until I was tumbled through whitewater.

Later, I got another Mora 840, drilled a hole at the end of the handle, and secured the knife to the sheath with a piece of paracord. Problem solved.

Today, many knives are coming with a hole in the handle. But I don’t see a lot of people taking advantage of them. All you have to do is make a lanyard out of a piece of fluorescent, reflective paracord, and you immediately make your knife safer.

Here’s five reasons why you should:

Secure against loss: The thought of a razor-sharp knife churning around loose in the whitewater near me encouraged thoughts of a solution. Since most Moras have a partial tang which ends midway through the handle, drilling a hole was simple. Then, tying the knife to the sheath was easy.

Safety when processing a large animal: While field dressing a large game animal, there comes a time when you’ll reach inside the cavity to cut the esophagus so the intestines can be pulled out. This is a messy, bloody situation, which makes a knife handle slippery. You really don’t want your hand to slip down the handle onto the blade. 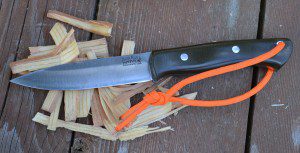 This Bark River Aurora bushcraft knife will be easier to see with the fluorescent, reflective paracord attached to the handle.

Or suppose a lengthy fish-cleaning session is going on. As your knife dulls, the handle will probably get slippery from the slime, scales, blood and guts. All it takes is an inattentive instant to hurt yourself.

A lanyard around your wrist or hand can prevent this.

Hand-to-hand combat: The rarest of all combat scenarios is where people square off with pointy, edged weapons to try and kill each other. (Another definition of  “hand-to-hand” is “out of ammo.”) Unless you believe the “Walking Dead”  scenario is possible, this potential is not even on most people’s radar.

But sabers and other sharp weapons have traditionally had some way to secure the weapon, so it doesn’t get wrested away in battle. If a fighting knife is in your future, consider how you will hang on to it during a struggle.

Safety while using: If you’re using the knife in deep snow, or where there is the potential for dropping it in water or mud, tie a longer cord to the lanyard. Then tie the cord to your belt or run it through a button hole. That could save losing your best survival tool. 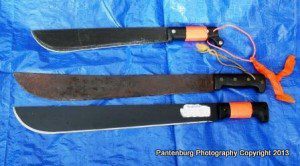 Greater visibility: Put your knife down while doing some task, and you may lose it. Or forget where you put it. The easy solution is to get a knife with a high visibility handle.

I usually tie a piece of fluorescent flagging to the handle of my machete when making igloos or snow shelters. The flagging will flutter with the wind and mark the machete location.

Using the hole in the handle isn’t rocket science. And running paracord through that hole to secure the knife is not a new idea. But if this prevents loss of your only survival tool, you’ll be pleased you did it.