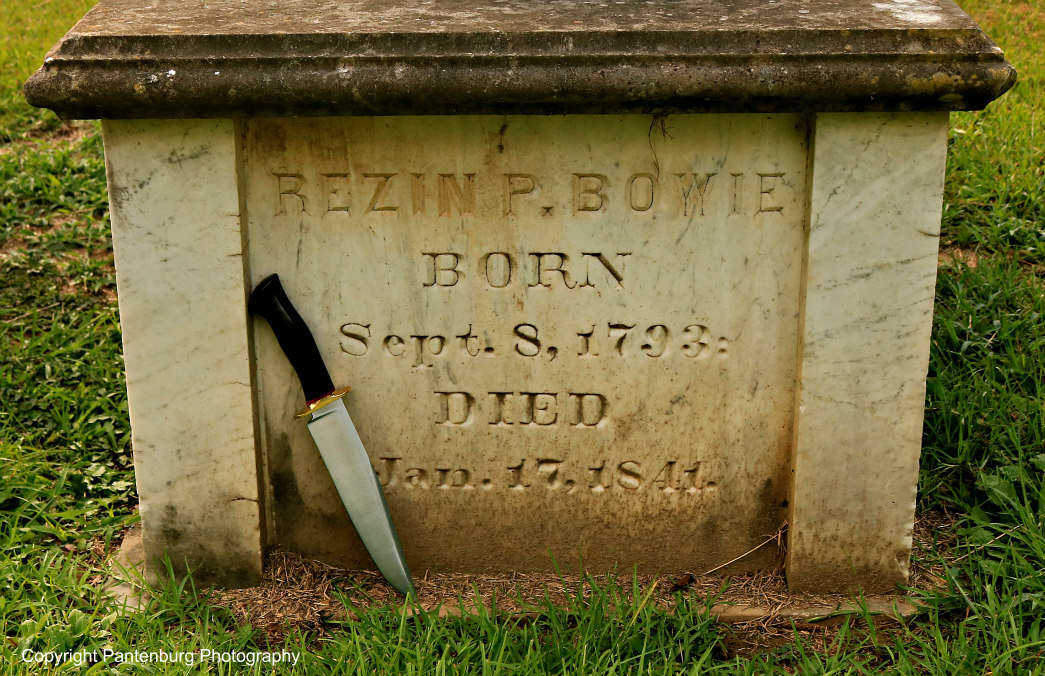 Really, who needs a Bowie knife?

Well, I do. I saw this one at the 2018 BLADE show in Atlanta in June and it came home with me. I’m liking it more all the time, and it is definitely a user.

I was mowing my lawn when my next door neighbor and friends started skinning a seven-foot gator. The Mississippi alligator season goes for about 10 days, right around Labor Day, and skinning an alligator has been on my bucket list for a long time. IMHO the thick, tough hides of alligators and wild boars provide the ultimate challenge for a hunting knife. 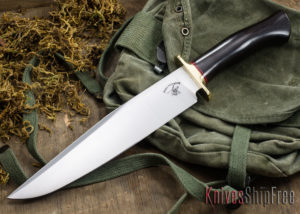 I grabbed a handful of  knives and headed over, and the guys let me help skin and butcher. The Hemphill Bowie was used for various cutting tasks, including cutting the tail off and disjointing the legs. I sent photos to knifemaker Jesse Hemphill, and as a result, the Bowie is now officially named the Jesse Hemphill Gator Breaker.

Let me digress slightly. IMO, there is little use or need for ornamental, wild and crazy design knives that aren’t good for much except lightening your wallet. The historic connections of the Bowie knife design are wonderful, but there didn’t seem to be much use for one today.

Anyway, I was wandering around the booths at BLADE and came across Jesse. We recognized each other instantly. I’ve used Jesse’s knives extensively over the years, and corresponded with him, providing input and feedback.

I claim to be the first to use a Custom Hemphill Damascus knife to field dress a buck deer.  Later that season, in Mississippi, I used a Hemphill Town Creek II to field dress another buck. Both knives worked superbly.

Jesse had just completed a run of Bowies, and I ended up with one. The Gator Breaker follows his signature take on a classic Bowie knife. 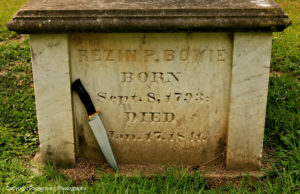 The Hemphill Bowie at the grave of Rezin P. Bowie, inventor of the Bowie knife.

Why a Bowie knife?

I’ve always been stumped on what exactly to use a Bowie knife for. The standard Bowie, whatever that configuration might be, IMHO, is generally too long and has too thick a blade to be a good hunting knife. Most are too heavy to carry much.

But the original Bowies were actually beef breaking knives – a 10 to 12 inch blade a butcher used to quarter carcasses. That design is still widely used today by meat processors. Eric Addy, the butcher who lets me test knives at his shop, uses a 12-inch breaking knife for most of his meat cutting.

And a Bowie has some applications in big game hunting. My long-time elk hunting buddy, Phil Walker, carries a 10-inch Bowie and an 8-inch Old Hickory butcher knife hunting in Central Idaho, along with a Ruger Number One in .338.

On opening day several years ago, he killed a 6×6 bull, butchered it and packed out all the meat by himself. And that was not a fluke. Whenever he came casually sauntering back into camp at nightfall, trying to hide his grin, we knew there was a meat hauling job ahead of us.

Frontiersmen in the United States have always carried big knives. The 1700s longhunters in the eastern United States routinely carried a seven to ten-inch rifleman’s knife, which bore a remarkable resemblance to some Bowies. Because of their cutlery preferences, these European hunters were called “long knives” by the natives.

State-of-the-art weaponry at the time was a blackpowder firearm, ignited with a flintlock. Flintlocks are notoriously finicky when it comes to wet weather. This lead to such saying as “flash in the pan,” “going off half cocked,” and of course “keep your powder dry.” SOP for a skirmish or battle was to fire your one shot, then go hand-to-hand with knives and tomahawks.

The best selling knife in the western fur trade, according to various reports, was an eight-to-ten inch butcher knife. This knife was used for everything from butchering large and small game, to slicing meat and vegetables to scalping your fallen enemy.

After the famous Sandbar Fight, where Jim Bowie wielded the blade that later would later be named after him, Bowie knives became the rage of the frontier. And today, there is still that allure.

So there is the history. (Click here to read more Bowie Knife history.) 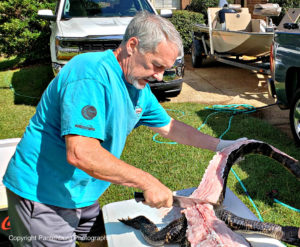 The Hemphill Gator Breaker Bowie got its first field use by butchering an alligator.

Here are my impressions of the Hemphill Bowie so far:

Handle: The Moran-style handle fits my hand well. Any handle under four inches long usually doesn’t work for me, but the Bowie’s is generous, and thick enough to give me a good grip. My test for grip size is if my fingers touch my palm when holding the knife. If they do, the handle is too slim for me to use safely. The Gator Breaker handle is just right.

The handle proved to be solid and secure, even with blood on the handle and me wearing latex and cut resistant gloves.

I hadn’t used this steel before, but the Gator Breaker stays sharp. Whittling, carving wood and cutting meat apparently didn’t affect the edge. Even after hacking through cartilage, disjointing legs and cutting the gator’s spine and tail off, the edge was still shaving sharp.

The steel appears to be stain resistant.There was some staining from the gator blood, but that was partially because I was working fast, and didn’t wipe the blade every time when switching knives. A quick rub with Maas or Flitz metal polisher restores the shine .

Some stropping and use will eventually form the micro bevel into a full convex.

Blade thickness: I’ve tried some Bowies that had such thick blades they felt and handled like crowbars. At .177-inch, the thickness balances perfectly with the rest of the blade. This contributes to the excellent handling and light weight. This knife feels alive in your hand. It is also a fine watermelon cutter.

Quillon: Bowies may or may not have quillons, or cross guards. The original Bowies generally looked somewhat like chefs knives, with a heel that prevented the hand from sliding up onto the blade. Other Bowies had large, elaborate quillons designed to protect the user’s hand in a knife fight.

The Gator Breaker quillon is a nice compromise, not too large, and not too small.

Sheath: The knife comes with a sturdy leather sheath that protects the user and the blade. On a knife of this size, the sheath is very important for protection as well as for carrying. If the knife can’t be carried safely and comfortably, it may be left behind, or be dangerous.

So do you need this Bowie?

My modern firearms always fire, I don’t live in a hostile area, and don’t anticipate any hand-to-hand knife fighting with the fine folks who live near the deer camp.

But I also hunt with a flintlock and a percussion Lyman Great Plains Rifle, and my goal this deer season is to harvest at least one nice buck and several does  with those rifles. There are also feral hogs in some of the areas I hunt, and landowners want them killed on sight. Black bears have been seen, and there are rumors of panthers repopulating the Mississippi Delta.

So I really do need an authentic Bowie in case I get charged by a wild boar, bear or panther while squirrel hunting or chasing after deer. Once my rifle is empty, I might have to use the Bowie to defend myself. It’s actually a safety issue, as I explained to my wife, more so than me just wanting another knife that matches my rifle. And of course, she wants me to be safe while outdoors, doesn’t she? 🙂

So while a Bowie is a necessity and an outdoor safety tool for me, you might get one just because it is so well made.

When craftspeople love what they do, it shows in their work. Pride in workmanship, attention to detail, and above all, love for the medium makes this Hemphill Bowie a piece of art. It’s a keeper.