Is this the best fillet knife? We review the Bark River Kalahari Sportsman 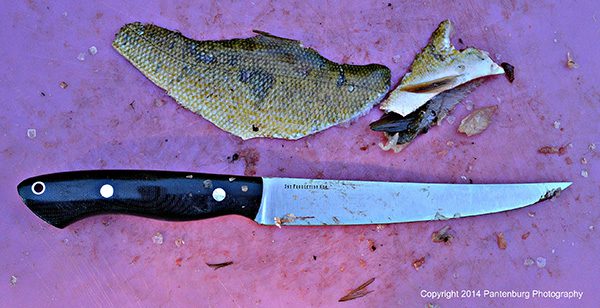 Disclaimer: KnivesShipFree.com is a sponsor of SurvivalCommonSense.com. I bought this knife to review, and all I ever promise in any equipment review is a fair shake.

A quality fillet knife is one of the most useful outdoor tools imaginable.

After a week on the Mississippi River in northern Minnesota,  I sent home a lot of gear.  I was headed for the Gulf of Mexico on what turned out to be a six-month, end-to-end voyage of the big river, and my cruising setup had to be lean and efficient. (Read excerpts from the book here.) 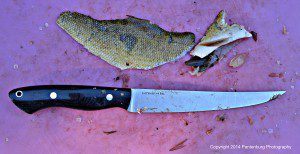 The Kalahari Sportsman is a well-designed fillet knife that can take care of most of your fish filleting needs.

Cutlery was taken care of with a Buck folding hunter, which rode on my hip,  and a six-inch Fiskar fillet knife. The Fiskar worked very well for filleting pan-sized fish and was used at least once a day to prepare whatever fish we caught.

Use any tool enough and you’ll come up with ideas on how it could be improved. After filleting thousands of fish on that voyage and subsequent expeditions, I came up with what I want in a fillet knife.

To start with, a fillet knife is a specialized tool, featuring a flexible, thin blade and it wouldn’t be my first choice as an all-around survival knife. The long, thin blade that makes it good for filleting or boning out meat means it won’t be the best choice for skinning big game animals. The fillet blade would also not hold up very well under prolonged, extreme use for whittling, battoning wood or every day cutting chores.

The Sportsman went along on an Oregon deer hunt in October, and the plan was to use it for boning out meat. But I didn’t kill a deer. But I went fishing later and a limit of smallmouth bass provided a great testing medium. (FYI – I support catch-and-release fishing. But there are always some fish that swallow the hook and that wouldn’t survive being released. These are the ones I keep and eat. Check out this fish chowder recipe!)

Here’s what I looked for in the Sportsman:

Appropriate blade length: Lengths of blade, IMO, should match the size of the fish. A five-inch is about the minimum for smaller panfish, and I like a six-to-seven inch for medium fish, and a nine-inch for steelhead, salmon and larger saltwater fish. For boning out meat,  the most useful length is a five-to-seven-inch blade, according to a consensus of the elk hunters I hunt and cut meat with.

With a 6.75 inch blade length, the Sportsman is spot on for overall usefulness.  (Learn more about blade length.)

The Bark River Kalahari, top, and the Sportsman, both new this year from Bark River Knives, feature the Kalahari handle. This combo performed magnificently on a Mississippi deer hunt.

Non-slip handle: A smushy, easy-to-grab handle that doesn’t get slippery when wet is a really good idea. Once some fish guts or slime get on the knife, you don’t want the handle to be hard to hold. But a well-designed handle that fits your hand, no matter what it is made of, is safer than a soft, smushy handle that doesn’t.

The Kalahari handle feels like it was designed for me. It fits my glove-size large hands well and that there is little danger of it twisting in my hand under hard use. The handle is also long enough – for some reason, there is a propensity among some knife makers to make short handles that look good and perform poorly. The micarta of the Kalahari handle seems to get tacky and “grippier” when wet, and that is a really good thing for a filleting knife.

Easy to sharpen: A fillet knife may be your most-used outdoors knife, and it will get dull at some point. The steel needs to hold an edge well, but still be easy to sharpen. I really like CPM S35VN steel in Bark River knives – it has superior edge-holding ability. Once you get the hang of stropping a blade, there is never a problem with maintaining a razor edge. This segues nicely into the next point:

Convex Grind: Every blade used to have a convex grind. Basically, that means that the entire blade grind comes down to edge. The Sportsman has a convex configuration, meaning there is no secondary edge that has to be sharpened. In my experience, this makes for superior edge-holding ability and easy maintenance. (Check out this video series on sharpening convex edges!)

Spine: An often overlooked part of a blade is the spine opposite the cutting edge. The spine on the Sportsman is ground at 90-degree angles, like an ice skate. This means the spine can be used for scraping a ferro rod to make firestarting sparks and process tinder. I don’t anticipate using a fillet knife for either of these tasks, but nobody ever expects accidents to happen either! (Take a look at this post to get an idea of what to look for in a knife spine.)

My overall rating of this knife would be a five out of five stars. It fits my hands and needs almost perfectly. It retails for about $200, but that is cheap for a knife you will use extensively over a lifetime. And, it comes with the Bark River 100 percent satisfaction guarantee.

I currently own  about eight or nine fillet knives in different configurations, and they get used heavily during deer and elk seasons (Hopefully!) Right now, the Sportsman is residing on the knife rack in my kitchen, and it looks like that will be its permanent home.

So, at some point, I may have to get another Sportsman, and have Bark River grind the blade length down to 5.5 inches. That length would be perfect for meat cutting. You never know what will turn out to be a “need.”