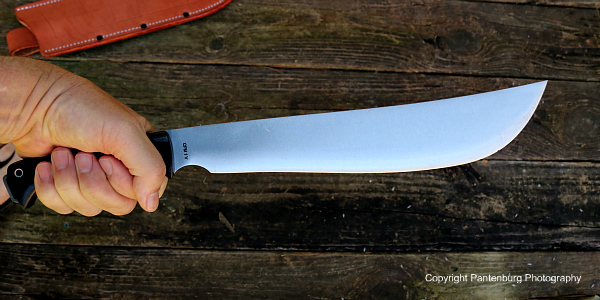 I like machetes, carry one in my car survival kit, and use them a lot.

If you are looking for a solid blade that won’t let you down, then you need to take a hard look at the Bark River Machete.

Disclaimer: Knivesshipfree.com and DLT Trading are Survivalcommonsense sponsors. I did not get a free knife, and I was not paid to write this review. All opinions expressed in this post are mine, and neither KSF, DLT nor Bark River have any input into this review. All I ever promise is a fair shake.

I use machetes extensively for building igloos, and clearing shooting lanes in bamboo and other brush thickets. These radically different environments and uses demonstrate the versatility of the big knives. (Do you need a machete in your survival/emergency gear? Read this story to help you decide.)

Most recently, there was a bamboo thicket in a Mississippi gully that needed to be cleared out. It called for a knife that could hold an edge.  I also needed to cut shooting lanes for deer stands, and restore some paths through brush that included multiple oak saplings. There couldn’t be a better real world field test.

By definition, a machete is a big knife with blade lengths ranging from 12-14 inches on up to about 24 inches. (Much longer than that, and I suppose the classification would have to be changed to “sword”.)

Various websites defined a machete as:  “…a large, heavy knife used in Central and South America as a weapon or for cutting vegetation.  A machete is a large cleaver-like cutting tool. The blade is typically long and usually thick.” 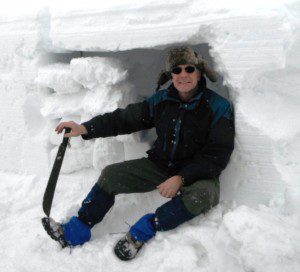 This $3 machete worked well to build this snow cave.

A perfect test for a machete is to cut bamboo. Bamboo is a really moist and dense wood, and has many strong fibers which are abrasive. The plant is able to process silicate materials and integrate them into its structure, according to several sources, and that is one reason the material is so strong. Bamboo is a definite edge killer, and of all the woods you can chop or cut with a knife or machete, bamboo is one of the worst.

There is something satisfying about clearing brush, (as former president George W. Bush can attest) and this becomes doubly so when you’re checking out a new machete. I hacked and chopped in a bamboo thicket and gave the knife (and my right arm!) a real world field test and workout.

Here is how the machete worked out.

These are the Bark River Machete specs, courtesy of Knivesshipfree.com

Check out the video:

Steel: I have used CPM 3V extensively, and CPM 4V a lot. This was my first use of  CPM-1V.

The steel is hardened to 58-60, which indicates it should hold an edge pretty well. I’m guessing CPM-1V has to be softer than the above mentioned steels, because a machete cuts with velocity, and there is a potential for chipping with a hard steel.

The knife came out of the box shaving sharp, and I didn’t touch the blade before chopping down several oak saplings, assorted vines and some 50 bamboo trees, that averaged one to two inches thick. At the end of the day, the machete still could whittle paper. I am VERY impressed with the steel.

Handle: The Bravo handle is one of the best on the market, and this machete uses the same handle that is on every Bravo. I’ve used Bravo handles in the extremes of heat and cold and have used them bloody, slimy and wet. There have never been any problems whatsoever. There no doubt the handle will continue to be a favorite among people who actively use their knives.

As a handle for a chopper, the Bravo worked really, really well. I wore gloves, but also used the machete bare handed. Despite the heat and humidity, my hands never got so sweaty that they slipped on the handle.

The sturdy leather sheath protects the edge, and the person carrying the machete.

Grind: All BR knives have a convex grind. Basically, this means the bevel on each side of the blade is slightly rounded (convex) as they taper to form the edge. I have done enough experimenting and using of various grinds to prove to my satisfaction that the convex grind is the best for overall use.

The machete proved that to my satisfaction again. The edge bites well, even on some oak saplings that had to be removed. I tried another quality machete in the same area, and its standard bevel edge just didn’t bite into the wood as well.

Point: One a machete such as this, the rounded, semi-flat point is useful. You’re not going to be using this for a thrusting weapon – I’m guessing – but you might use it for digging. This point is a good choice.

Blade length: A 12-inch blade is a good choice for a chopper. The blade is long enough to have the balance a chopper needs, but is not so long as to be unwieldy. I also have 10-inch and 18-inch blade machetes, and they work well for bigger and smaller chores.

Weight: The weight is not excessive, and this knife is light enough to be easily carried. But you still need some weight on any tool that cuts with velocity, and the BR felt good. If you were working all day cutting sugar cane or something like that, you might want a longer blade that weighed more.

Warranty: The Bark River warranty guarantees unconditional satisfaction, and they mean it. Got a problem? Call the factory and you can probably talk to the person who made the knife.

Made in the USA: All BR knives are made in Escanoba, Michigan by skilled American craftspeople. These folks pay local, state and federal taxes, and contribute to their communities. And they’re nice people. Buy American!

You heard it here first: All it would take to convert this machete to a fine Bowie-style blade would be to modify the tip to become a clip point, and add a long swedge. Essentially, you would then have a Bravo Bowie. This would be suitable for thrusting attacks, pig sticking and other Bowie-like activities.

Here’s the other stuff:

Choil: I don’t like a choil, that ground out finger hold area next to the handle, on any knife. Proponents claim that a choil allows the user to “choke up” on the blade for doing fine carving. Well, to date, I have never needed to “choke up” on a big knife to do anything. I have never used a machete for fine woodworking, and I can’t foresee where that might be necessary. I always carry a smaller knife on my person anyway and doesn’t it make sense to use the knife designed for the job?

Cost: Machetes are traditionally inexpensive tools, used for hand labor. The excellent Tramontina goes for about $20. The BR will set you back a couple of Benjamins and change, depending on what handle option you choose. You can always get something cheaper.

The BR is better built with stronger components. It will outlast several cheaper machetes.  And while you could buy and carry several Tramontinas for the price of one BR – would you? Maybe. I’m guessing probably not.

The bottom line is quality. If you reach the point where your survival depends on a tool, cost won’t be a consideration.

And you’ll be glad you have the best available. When it comes to machetes, that could be the Bark River.