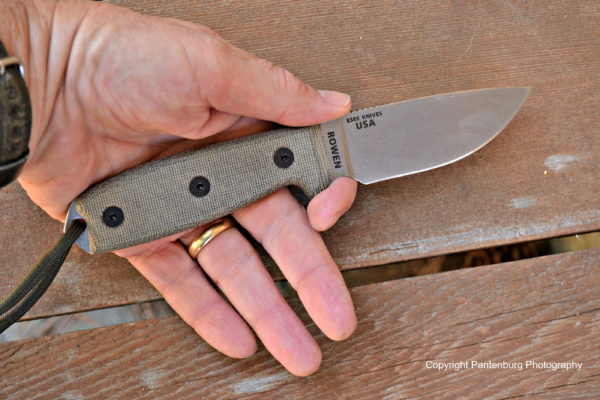 Knives go through fads and fashion cycles, just like any other product.

One of those fads is the choil, a rounded, ground-out section in front of the handle. Here is why you don’t need one.

Everybody has an opinion on blade designs, and everybody likes different things. That’s good – otherwise, a cutlery enthusiast’s life would be boring. There would never be innovations, and nobody would experiment. But like anything, fads come and go, and today’s latest craze may end up becoming tomorrow’s dated has-been.

The choil on this ESEE-3 blade is not necessary or useful.

A recent innovation, IMHO, is the choil on a knife blade. The idea, is that this allows the user to “choke up” on the blade to do finer work, such as wood carving. I hope this choil fad fades out and goes away. I’m not the only one.

Arctic survival guru, the legendary Mors Kochanski, in a winter camping symposium in Duluth, MN, called a choil on a knife “a waste of space…that’s a thing I despise greatly…” (See the whole presentation.)

“Some choils, due to their design, can get snagged and hung up while cutting soft materials, which could be a bad thing.” (The Tactical Knife, James Morgan Ayres, page 72)

I own dozens of knives, but only one, the Bark River Machete, has a choil. Here are some considerations before you invest in a knife with a choil.

1) A choil may negate the inherent safety of the handle design. A properly-designed handle is the only safe one.  When you bypass the hilt and/or quillion, and physically put your finger on the blade, you are are that much closer to getting cut.

Let’s think this through – you’re going to put your trigger finger right next to a razor sharp blade. You may be doing this in the dark, and the blade may be slippery and covered with blood. (Think field dressing a deer). Does this seem like a good idea?

If the choil is necessary to get complete use of your blade, you need to take a hard look at that knife.

2) Removes most useful whittling and carving section of blade. Ayers is right – here is how you can prove it on your knife.

3) Not a proven performer. “I have never seen a butcher knife, any commercial working knife, or any knife made before the twentieth century,  for that matter, with a choil, and I have no idea what they’re good for,” Ayres writes.

I concur. I’m that guy who gets on his knees next to a museum display case to minutely examine historical cutlery. I’ve done this as the Smithsonian, in Washington D.C.; the Alamo, The Museum of Mississippi History, Daniel Boone’s home in Missouri, and every other large or small museum I come across.

I’ve never seen a choil on any of the historic user knives. The longhunters, buffalo hunters, mountain men and Natives killed and processed an inordinate amount of big game animals on a daily basis. If there was any reason to “choke up” on a blade, they would have filed choils into their blades.

4) Cold weather can create problems: The temperature may be really low, your hands are cold and your fingers are starting to lose some feeling. Is this a good time to be sliding your hand up on the blade? And won’t direct contact between cold steel and a bare finger chill the finger even more?

Ayers comments: “The thought of putting my trigger finger up against that edge, maybe at night, maybe when it’s cold and my fingers are not very sensitive, the thought just…well, no. Not gonna happen. Nope.  If I want more control I will extend my finger along the top of the blade the way a butcher or chef might do.”

5) Solves a problem that doesn’t exist: Who ever plans to regularly  “choke up” on a blade to use? If that is happening to you frequently, then your knife choice needs reconsideration. I’ve been a successful deer and elk hunter for more than three decades, and have been in on the gutting, skinning, field dressing and quartering of many large animals. I’ve never seen one of my hunting buddies choke up on a knife, or have any need to.

I typically carry a minimum of two knives when I’m hunting, and more if I’m field testing a hunting knife. My hunting knife, with a 4-6 inch blade, will be used for gutting, skinning, quartering and disjointing the carcass. The other is smaller and may be a skinner with a 2-3 inch blade.

Rather than getting a knife with a choil, a better idea might be to carry a good folder in your pocket and use that for any detail work. I always carry some sort of folder and a Swiss Army Classic for its tweezers, scissors, finger nail file and small blade.

So, is there any reason to have a choil on your blade?

Of course! This is America, and you can do whatever you want to (within reason and constraints of the law). If a choil on your knife makes you happy, go for it.  From all the knife choils I see on new knives, many people are buying them and subsequently, makers will keep making them. I may be in the minority, but I’m basing my choices on hands-on experience.

So it’s all about choices, and you are welcome to yours.

To bastardize a freedom of speech quote attributed to Evelyn Beatrice Hall  “I disapprove of what your blade modifications may be, but I will defend to the death your right to choose them.”

Feedback from Randy: Your take on choils is spot on. Increased knife length, shortened usable cutting edge, while adding a “feature” that can get you hurt in a bad way if needed in a hurry. Wish I’d seen your article before buying the sexy looking custom 5160 with a huge finger choil recently. Being forged 5160, it has a built in finger guard so no need for choking up. Total waste of cutting blade. But I didn’t realize the problem with the choil until cutting some rope. I always put rope up to the finger guard, and one swift pull and it’s done. But that huge choil catches the rope and introduces a hazard if in a hurry. So I have a sexy looking knife that doesn’t meet my needs. So back to blade shopping, sans choil.