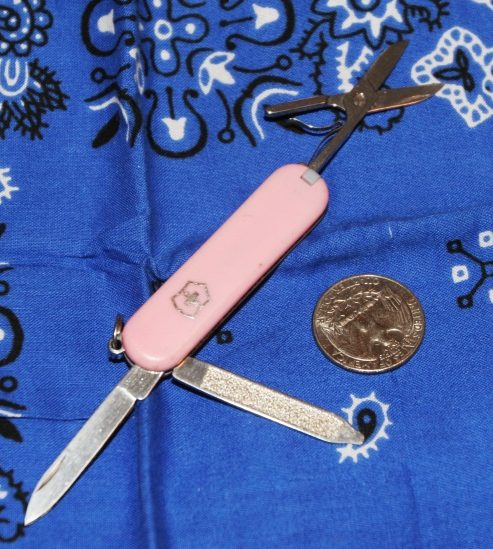 For lightweight hikers, who go long distances with minimal equipment, a Classic may be a good choice for a “survival” knife.

Elk Lake, Oregon is one of the major re-supply places for hikers on the Pacific Crest Trail. Every year, a handful of through hikers will attempt to walk border-to-border on the trail. They generally start in Mexico in April, and start trickling in to the Elk Lake Resort about August. They need to get to the Canadian border before the snow flies.

I was eating lunch at the resort several years ago, and noticed a young lady trekker at a picnic table loading her pack for the next section. She had opened her re-supply box, sliced a chunk of cheese, opened several large packages and cut a boot lace, all with her tiny, Classic Swiss Army knife.

The Classic had been her only knife for nearly three months on the trail. 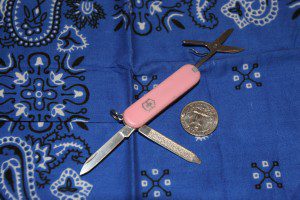 My wife’s Classic model Swiss Army knife is a good choice to accompany a large sheath knife as a survival combo.

On a trail like the Pacific Crest or Appalachian, you’ll seldom be isolated from other hikers for very long if you need help.

If you’re out on a dayhike with a large group of well-prepared hikers, you may not use a knife at all. But (DANGER!!! DANGER!!! SURVIVAL COMMON SENSE ALERT!!!) that doesn’t mean you don’t need a knife.

Get separated from the group, off the beaten path in the backcountry, or in some sort of wilderness survival situation and you may desperately need a real survival knife.

Calling a Classic a survival knife is quite a stretch, and I’d never carry that knife as my only survival tool. But it doesn’t matter where I am, or what I’m doing, if it is legal, I have a Classic with me.

In most areas, it is socially unacceptable to wear a sheath survival knife with your dress or business suit. But at 2-1/2 inches long, a Classic is virtually un-noticeable. (Don’t try to take one on an airplane or into a courthouse! The Classic does show up on metal detectors!)

If an emergency develops in an urban, business office environment, maybe all you’ll have are the survival tools on you. And I’d much rather have a tiny knife, than no knife at all. A Classic can be an important part of your survival gear.

Here’s what you get with a Classic:

Here’s a tip to add one more tool. Take a Dremel tool and grind the end of the file so it fits the hinge screw of your glasses. Nobody ever has a glasses screwdriver when you need one! 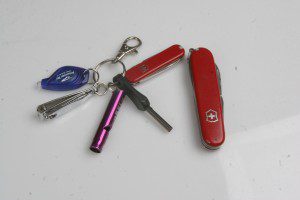 This keyring kit is one way to keep some of the basic survival tools with you at all times. On the keyring: LED flashlight, fingernail clippers, whistle, Boy Scout Hot Spark firemaker and Classic Swiss Army knife.

Outdoors, depending on the terrain and activity, I may take several different knives that are used for special tasks. As an overall survival and big game hunting knife, I used a Cold Steel SRK  for almost 20 years.

For upland and small game hunting and cleaning fish; camp chores such as whittling wiener sticks, spreading peanut butter, peeling potatoes and chopping onions, and other mundane tasks, I generally carry a Mora-style knife.
For everyday carry, either in my pocket or a belt pouch, I prefer a thin, two-layer thickness knife with multiple tools, such as a Swiss Army Tinker.

Occasionally, I’ll take along a multi-tool. My favorite over the last ten years has proven to be the Leatherman Wave.

WHAT IS THE BEST TACTICAL LIGHT?

When it comes to weight, the Classic is the lightweight champ, tipping the postal scales at one ounce. The Swiss Army Tinker weighs 2.5 ounces; a Frost Mora also weighs about 2.5 ounces (5 ounces with the six feet of duct tape wrapped around the sheath) and the SRK is 8 ounces, with 2.5 ounces of duct tape on the sheath. I also regularly carry the Ambush Tundra, Bark River Bravo LT  1.25, L.T. Wright Genesis and Battle Horse Knives Feather Stick.

Carry a Classic in addition to any of these larger knives, and you have an effective multi-tool set. In and of itself, the Classic is an inadequate survival knife. But combined with a larger knife, the knife will prove to be worth its weight in gold.

So get a Classic and add it to your survival or prepping gear. As happened to me, you’ll go from wondering what good the dinky little knife could be, to wondering how you got along without it.