Is the Bark River Hauk the belt knife you’ve been looking for? 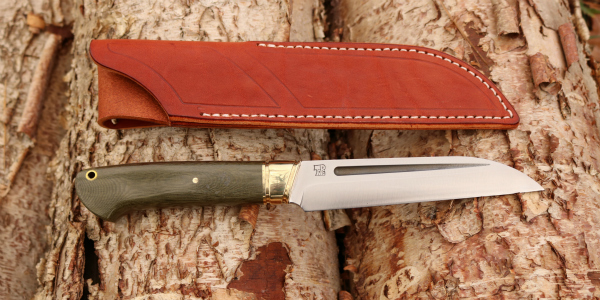 A few Nordic stock designs, such as the Seax, the Scandinavian Mora-style, the large Laplander Sami herding knife and Finland’s Puukko have lasted for hundreds of years. There’s a good reason that’s the case.

This Bark River Knives™  traditional-design belt knife has a lot going for it, and it might be the EDC or bushcraft knife you’re been looking for.

The Bark River Hauk has a traditional Northern European design that goes back about 1,000 years.

I must confess: Part of the reason I watch “Vikings” on Netflix is because of the really cool, authentic blades. While others might be checking out the action during the sword fights, I’m looking at blade designs. I may rewind to go back and look at some particular knife. If it’s good enough for a Berserker Viking badass to carry as an EDC, it should work for me when I’m trimming flowers, pruning bushes in the yard or whittling wiener sticks at the church picnic.

Because of my Northern European heritage, I am naturally drawn to the tools my ancestors probably used. About a thousand years ago in Europe, steel was rare and expensive, and a family might only have one or two knives.  Those knives did everything, from butchering cattle and sheep, to cooking to fighting. The designs would evolve to be the most useful for the circumstances.

The Hauk is the latest in the Bark River – D. Tope Knives™ co-branded series of Scandinavian-Nordic style knives. This is a very traditional seax style blade in a size that makes a great belt knife for anything outdoors.

Historical accuracy: This knife is based on the Scramasax.  The dictionary defines a Scramasax as “A large knife with a single-edged blade found among the grave goods in many Anglo-Saxon burials. Such knives were used in hunting and fighting.” The Hauk looks like it would be at home on the belt of a German Bumgarner, a Norwegian fisherman, a French farmer  or a Viking Berserker. That, alone is enough to interest us history enthusiasts. The Scramasax was the most popular belt knife from the Dark Ages well into the Renaissance period in Europe. The Scandinavian-Nordic influence is unmistakable in the Hauk and is actually the root of more modern wharncliffe style blades.

Design: As mentioned, the Scramseax design goes back at least 1,000 years. If it didn’t work well, it would have been altered to where it would. Nothing succeeds like success, and the Hauk design is tried and tested. 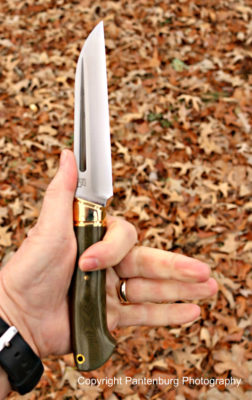 The Hauk’s generous handle makes it easy to use, even when wearing gloves.

Handle: The generous, oblong profile grip is easy to hold onto. As befits a knife that would be used in a cold climate, the handle is big enough to use while wearing gloves. It is a great kitchen knife design and works well for slicing and chopping. My green micarta handle doesn’t get slippery when damp or wet, and there is no danger of hot spots developing with extended use.

Steel: A2 is a good choice for this knife. While attractive, the Hauk is designed to be a user. That means the edge should take hard use, hold an edge and be easy to sharpen. A2 does all that, and the couple dozen or so A2 BRs I’ve wrung out have worked very, very well. I think part of it has to do with BR’s heat treat, which is exemplary.

Grind: I prefer a convex grind over all others. My own tests while skinning and processing deer and elk have proven to my satisfaction, that convex is the best grind for a hunting/bushcraft knife. I’ve had my two Tundras re-ground to convex because I like it so much.

Blade thickness: I prefer thin blades. With today’s excellent steels, I don’t see a reason for a thick blade for most uses. A blade with .187-inch thickness is going to be a good slicer, as well as strong enough to withstand lateral twisting.

Spine: The Hauk’s spine is ground at a 90-degree angle, like an ice skate. That means it will scrape sparks off a ferro rod, or work well for processing tinder. The helps save the sharp edge for other work.

Point: The point is the ancestor of what is known as the wharncliffe. This point makes the knife good for chopping vegetables in the kitchen. Also, the point is good for gutting big game animals. In that initial, edge-up opening of the abdominal cavity, the curve of the blade keeps the point from piercing the entrails. The point is also good for skinning the areas around the shoulders and neck. The point is a good choice for the initial under the tail knife work.

Sheath: The sturdy leather sheath protects the edge and the user. There are two holes at the top of the belt loop to allow placing a D ring in there, and making the sheath a dangler.

Made in USA: All Bark River Knives are made in Escanoba, Michigan by skilled American craftspeople. These workers make a decent wage, are taxpayers and contribute to their communities. When you support American small business, you support these folks.

Warranty: Bark River’s unconditional, 100 percent satisfaction guarantee is one of the best in the industry. There is no hassle on a return, for any reason.

The proven design means this knife is going to work well. There is no doubt in my mind that this old design, combined with modern materials, is going to be a fantastic user in the field.