Restoring a Cast Iron Treasure: How to clean and season the old time cooking utensils 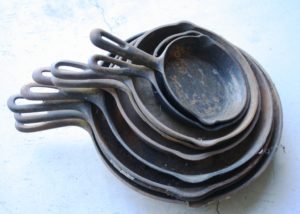 When my son Dan moved to his first apartment, it seemed like my parental duty to provide him with an “urban survival kit” that included some basic kitchen tools. These necessities included several good “survival manuals” (cookbooks) some sharp kitchen “survival knives” and a well-seasoned cast iron Dutch oven.

Dan’s urban “survival training” came from Boy Scout Troop 18 in Bend, Oregon.   He, along with most of his buddies, earned the cooking merit badge. The requirements included learning how to cook outdoors over a campfire, using aluminum foil or a cast iron Dutch oven.

Dan’s oven is a cast-iron, 10-inch Lodge-brand oven that can be used both indoors and outside. It is the same brand, make, model and size of oven I have used at least weekly for nearly 30 years. When I bought my new oven, it seemed expensive. 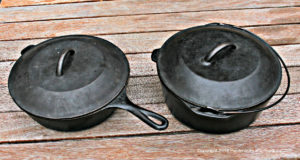 A chicken fryer, left and an indoor Dutch oven are great choices to start with your cast iron utensils collection with

But Dan’s oven was free because it was slightly rusty and dirty from being stored in an old garage for years. A little elbow grease restored the cast iron to like-new condition.

If you’re a recycler (like many preppers and survivalists are) and you frequent garage sales and thrift stores, then keep an eye out for good, useful cast-iron cooking implements. Somebody’s rusty, dust-covered survivor of a failed camping trip may end up becoming a valuable addition to your cooking tools.

In a survival situation, a Dutch oven is a useful tool for baking, boiling, sauteing or frying. You can use virtually any heat source, including a campfire, charcoal, a propane burner or barbecue grill. And talk about something with barter or trade value – a few days without electricity, and everyone will be clamoring for a Dutch oven.

You can also save money. Just keep a list of the cast iron items you need or want when you go garage sale-ing, because you never know when a treasure will pop up.

If you don’t need any more cast iron, you can always upgrade what you have, or buy duplicates. Re-seasoned cast iron also makes a great, unique gift that will be used and appreciated for years. Nobody re-gifts a good cast iron Dutch oven! 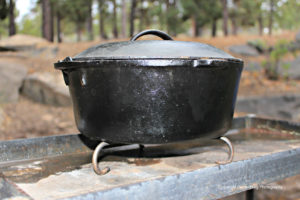 This indoor Dutch oven can be used outside by putting a trivet underneath to keep the bottom off the coals.

My Dad, sister Karla, brother Mike and I all collect cast iron, and the older and more obscure the brand, the better. In our informal competition, the only rule is that cast iron can only be acquired using fair chase methods. That means no eBay, or advertising. A special find or acquisition is always good for a flurry of emails!

But aside from the fun of searching and looking, cast iron implements are heirloom tools you can use regularly. And cast iron, combined with a little knowledge, can be used both indoors and outside, making a cast iron Dutch oven a multi-purpose survival tool.

When properly seasoned, cast iron can be virtually nonstick. The even heating and heat-retaining ability make cast iron a good choice for frying, searing, baking and cooking stews, gumbos and soups.

But buy quality pieces, because your cast-iron cookware can be with you for generations. I still regularly use the skillet my grandmother reportedly got in 1918 as a wedding present. My Mom got it in 1950 and used it for decades, until the skillet got passed along to me. Today, grandma’s skillet is good for at least a few more generations of regular use!

My daughter, Mary, already has dibs on an 80-year old, 6-inch skillet she cooks eggs in. And Dad’s old oblong cast iron Dutch oven that he used back in the 1960s is still in fine shape and could be used. 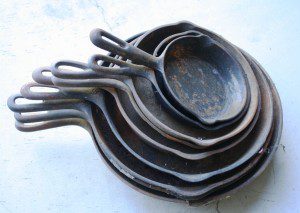 This stack of garage sale cast iron skillets can be restored to usefulness with a little work. (Leon Pantenburg photo)

When it comes to quality, experts know that some experienced iron may be superior to what’s on the store shelves. But a potential buyer of used cast iron had better beware. A cheap piece of cast junk is never a good deal, because it will end up being replaced at some point.

Although I own several different brands of cast iron implements, I prefer Lodge cast iron for competition cooking because of the uniform quality. Camp Chef makes another good oven. (In competition, I have been beaten by cooks using virtually every brand on the market. It’s the cook, not the oven, that wins the competition!)

Before buying any used piece, look it over carefully. Dirt, dust and light rust are generally not a problem, but deep rust pitting might be. If the piece has been painted or had motor oil in it, or has any cracks, pinholes, warps, scratches or signs of abuse, don’t buy it.

Then check the quality of the casting. Look for uniform thickness in the sides, bottom and lid, because variances in thickness could cause hot or cold spots. Make sure lids fit tightly, with no gaps or rocking. A properly-fitted lid forms a seal that creates pressure while cooking and helps retain moisture.

Once you buy a used piece, it will probably need to be seasoned. Seasoning is the black patina that protects the metal and makes it nonstick. If the seasoning looks even, with no flaking or rust spots, then a good cleaning may be all that is needed before using.

But most likely, you’ll have to re-season, and there are different ways to accomplish that. My brother and competition partner, Michael Pantenburg, salvaged a badly-mistreated oven by soaking the cast iron overnight in regular Coca Cola, then scrubbing it with a steel wool pad. When he was done, the cast iron looked brand new. 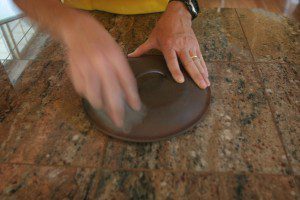 After brushing or the dust or dirt, remove the rust and old patina with a steel wool pad.

An antique gumbo pot my Dad got at a farm sale decades ago was severely rusted. I took a crack at cleaning it with steel wool, but gave up. It was used to haul ashes from my fireplace for a while. Then, I took it to an auto body shop and had it sandblasted for $5. Once it was re-seasoned, the pot went back to work. When my mother-in-law visits from Mississippi, she uses it to make seafood gumbo.

Avoid cooking any tomato or bean products in a newly seasoned cast iron for the first few times, because the acid will remove the seasoning. After that, use your new, experienced cast iron whenever possible. The more you use it, the more seasoned it gets and the better it will work.

How to season cast iron

Scrub off any dirt or dust. A stiff fiber or wire brush works well for this initial cleaning.

Remove the old seasoning so bare metal is visible. Start by rubbing the iron with steel wool. If necessary, use light sandpaper. In extreme cases, take a particularly challenging piece to an auto body shop and have it sandblasted.

Once you get to shiny metal, wash and dry the piece. Then lightly coat the surface with vegetable oil so it is shiny but the oil doesn’t puddle. I prefer solid shortening for seasoning, but there are also some really good commercial products available.

When the cast iron is clean and polished, coat the surface with shortening. Only use enough to make the cast iron look wet.Place the cast iron in a 350-degree oven and bake for about an hour. This is going to be smelly and smoky, so if you have a gas grill, do this outside. Put the piece upside down on the grill and lower the hood. Shut off the heat when the smoke stops, and let the grill and cast iron cool completely. This technique can be repeated until you get the preferred shade of black and level of nonstick.

Re-seasoning can be done whenever you feel like doing it. I periodically re-season some the scout troop’s Dutch ovens, just because I like them to look really black and shiny.

And they look really cool when we stack them!