Video: Five things to avoid when choosing a survival/hunting knife. 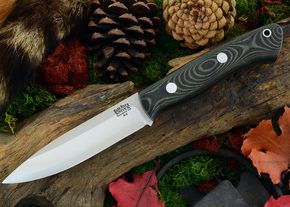 What qualities need to be included the best survival/hunting knife is the topic of endless discussion. But maybe the conversation should start with the attributes you don’t want. Here are some suggestions.

My preferences in survival/hunting knives are based on experience, personal prejudices and use in the field. So when readers ask which style knife I prefer, it’s sometimes easier to point out what I don’t want. 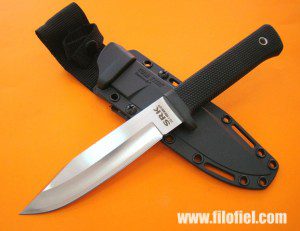 This Cold Steel SRK is my choice for a safe and effective survival knife.

But for the sake of definition, I’m going to call a survival/hunting knife the one knife you would take along in your daypack on a hunt. That knife would be able to handle whatever survival tasks came up, as well as process a big game animal in the field.

If you’re choosing a survival/hunting knife, here are some things to avoid:

Folding blade: I carry a couple of folding knives on a daily basis, and I love pocket knives of all sizes, shapes and configurations. But the weak point in any folder is the hinge, and that is the place it is most likely to break. The hinge is also an expensive part to make, so in less-expensive folders, that means quality will have to be compromised somewhere else.

Any folder has the potential to fold the blade on a finger. A lock blade won’t guarantee safety. Several years ago, a local Boy Scout cut his finger severely when the lock on his blade failed. This won’t happen with a rigid blade. Also, when you’re using a knife for cooking,  you don’t want a folder because of the potential for food debris to get in the handle and joints of the hinge.

For years, I carried a Buck folding hunting knife, and still like it very much. But I wouldn’t consider any folder a survival knife.

Gut hook: The only value of a gut hook, IMO,  is to make a couple of  incisions down the belly when gutting a big game animal. Those specialized cuts are not worth having a gut hook for. The hook looks awful, will catch on things, may snag your clothing or possibly cut you. It eliminates the ability to apply pressure on the top of the knife.

A gut hook can be used for some skinning, but it requires a specialized file or tool to sharpen it. It you must have a gut hook, get one designed specifically for gutting and skinning, such as a Wyoming Knife with replaceable blades.

Serrated edge: Another specialized grind that isn’t that useful. If you’re doing a lot of cutting of weeds, fibers etc, there might be some benefit to a serrated edge. I’ve heard some law enforcement officers and military folks like a serrated edge for cutting through zip-ties used as handcuffs. But generally, the serrations will dull fairly easily, and require a specialized tool and some expertise to restore sharpness.

Hollow handle: The 1980s Rambo movies, starring a steroid-infused, testosterone-exuding Sylvester Stallone, started the whole hollow-handle Bowie-type survival knife cult. Rambo, according to the “First Blood” scriptwriters, could apparently pack anything he needed for wilderness or urban survival in the hollow handle of his knife/sword.  As the Rambo movies progressed, the knives got bigger.

In the real world, I don’t see any point in a knife with a hollow handle. The miniscule storage space gained from the hollow  is not worth compromising the tang in the handle. (Beside – just what would you put in that space? Here’s some thoughts – check out what to put in your hollow handle knife.)

Blade saw edge:You’ve all seen the survival knives with the saw grind on the back of the blade opposite the edge.

Most of those saws are worthless. For a saw to cut and clean itself, the points have to be alternately offset of each other. That means the points protrude past the edge of the steel. This would cause the blade to catch on the sheath. Also, unless the blade is really long, you’d get a tiny, inches-long stroke. Even if the saw blade was sharp, and cut and cleaned itself, it would take a long time to cut through anything.

Blade too long: For decades, I have handled my big game processing chores with a variety of butcher tools with blades ranging in length from three to 10 inches. Each tool has a specialized task, and it performs that job very well. But the knife I carry hunting will have a four-to-six-inch blade. It will be used for gutting the animal in the field,  skinning and quartering the carcass.

So what do I use? A Cold Steel Master Hunter is a really good choice as a hunting knife. My Cold Steel SRK is my pick for a survival knife. My C.T. Fischer four-inch Bushcraft knife is probably the most versatile, rugged  knife I own. Because of its light weight, small size and comfortable handle, I tend to include it in my pack on most outings.

Those are my choices and my thoughts.