Video: What you need to make a Dutch oven survival kit

Probably the most common question about Dutch oven cooking is: What do I need to get started?

Here’s what I take to elk camp in October, and what I’d recommend you get as part of your urban and wilderness survival kit!

During virtually any emergency, you will need a cooking tool that can bake, boil, fry and sauté. And it should be able to function  with a variety of heat sources, since electricity will probably be out.

My nomination for this wonder implement has been around for hundreds of years. It’s easy to find, cheap and effective.  Get a cast iron or aluminum Dutch oven. This cooking tool has a proven track record, and it can use virtually any heat source.

A Dutch oven can be used to boil water, make a stew, bake bread, and cook virtually anything that can be fitted inside. And if you were forced to evacuate an area, a camp and/or Dutch oven is compact and light enough to be easily transported. 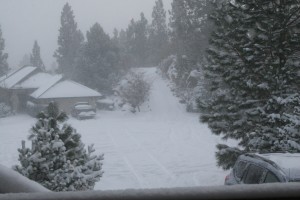 A winter storm can make travel particularly dangerous. And if the electricity goes out, you’ll have the added challenge of cooking!

Flashback: Hurricane Katrina was due to hit land in a few hours, and my relatives in Mississippi, about 150 miles north of New Orleans, weren’t sure what was going to happen.  I overheard my wife talking on the phone to her sister, Patti,  of Clinton, Mississippi. In the middle of the hurricane preparation discussion, they started talking about recipes and what to cook, using a cast iron Dutch oven!

Everyone near Katrina faced a potential power outage that could last indefinitely. There was a discussion of evacuating, versus staying put. Among the urban survival necessities in any natural disaster is a way to cook and purify water by boiling.

We had given Patti a hand-me-down cast iron camp oven with the lipped lid and three legs. Designed to be heated on top and bottom with campfire coals or charcoal, the camp oven was considered a necessity on the American frontier for at least two centuries. That type oven was taken on the Lewis and Clark expedition, was used by travelers on the Oregon trail, and was indispensable in countless cabins, lean-tos and soddies.

Technically, a “Dutch” oven has a rounded top and  no legs and can be used in a conventional oven on top of a stove, or on an outdoor propane fish cooker of grill.

The Camp oven, left and the Dutch oven will both work well in off-grid cooking.

My wife’s advice to her sister was to get at least 50 pounds of charcoal and three round, 14-inch diameter metal pet food dishes. Put the oven, these items and some basic cooking utensils in a square milk crate for storage.

I’ve been cooking with Dutch ovens at hunting and fishing camps for decades, and on many camping trips and Boy Scout and Girl Scout outings. Beginners frequently ask for a list of tools to get started in Dutch oven cooking.  Here is the basic, bare-bones list of Dutch oven survival kit necessities.