We started paddling the next morning from Wanagan  through a canoeist’s paradise. 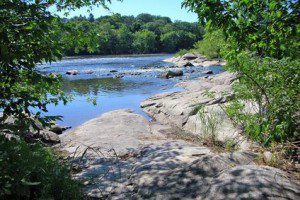 The scenery ranged from pine forests that infused the air with a sweet, pine woods smell, to marshes full of cattails with stalks higher than our heads. The wetlands were full of waterfowl.  It seemed at every bend there was a mother duck thrashing on the water surface and acting crippled to lure us away from her nest.

The first week was spent fishing, floating and enjoying the river. After the first day, Mike and I traded positions in the canoe and I paddled in front. I hoped to get some wildlife photos, and could also paddle longer and harder than Mike.

It only took one day for him to appreciate the physical work of paddling. Eventually, he developed his skill as a helmsman to where he could quit paddling and loaf along, and be unnoticed until I turned around. He also became an expert at steering the canoe through all sorts of obstacles.

But we didn’t push too hard, because Karla and Al were on vacation, and they intended to have fun. The Mississippi, at that point, averaged about 20 feet wide, and it was full of fish.

The first stop on the first day, I rigged up a lure on a fishing rod for Karla. She tossed the lure in a likely looking spot, and 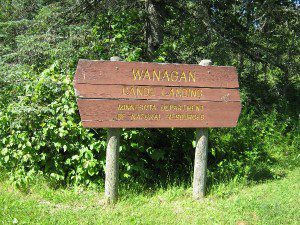 The start of the first day.

The fish swam all over the river, the drag on Karla’s reel singing loudly, until I could land it. The fish was hooked on a stringer, and we continued on, fishing all the way.

You never knew what fish might be in the next hole, and we wanted some for the mid-day meal. Walleyes, northern pike and sauger swim in the northern stretches of the river. Crappies, plump bluegills, largemouth bass and bullheads are in the backwater lakes and sloughs. Channel catfish are found virtually everywhere, and the white bass fisheries can explode at times.

You might even hook into a huge sturgeon or snag a giant paddlefish that would most likely swim off with hook, line and sinker. In the list of state record fish, the Mississippi has yielded five of those fish, including a 157-pound alligator gar in 1944. Other record fish from this great river are a five-pound, 12-ounce sauger, a 48-pound buffalo, a 57-pound, two-ounce large sturgeon and a 52-pound paddlefish which was landed in 1977. 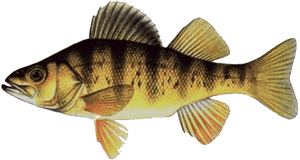 Perch are easily caught with a yellow grub on a jighead.

I’d brought along my extensive collection of lures, and several fishing rods. After the first few days, I settled on my standard fishing rig for the Mississippi, and sent everything else home. This setup served me well all the way to Greenville, Mississippi.

The rig that worked best was a medium-action, six-foot spinning rod, with a fast tip. My reel was a Mitchell 300, spooled with eight-pound test fluorescent line. A diving, jointed silver Rapala worked well for smallmouth bass and walleye, and my go-to lure was a three-inch yellow grub on a 1/8-ounce jig head.

I kept the rod rigged, usually with the yellow grub, and would make a couple quick casts whenever I saw a likely-looking hole. Using this setup, I caught hundreds of fish on the Mississippi, resulting in dozens of tasty meals.

Karla was hooked was firmly as her first northern, and spent the rest of the week fishing at every opportunity. We caught and released hundreds of fish, and about mid-morning, would start saving those that wouldn’t survive. By noon, we always had enough for lunch. At one point, we hit a bed of white bass, and caught fish as fast as we could cast and land them. There were enough for lunch in about 10 minutes.

A “shore lunch” is a tradition in Minnesota. You take whatever fish that have been caught that morning, fillet them, and break out the campstove. The fish are flash fried on a hot skillet. The traditional side dish is hashbrown potatoes and baked beans.

Our routine was that we’d pull onto a likely beach and Karla set up the cooking gear while Al and I filleted the fish. All the cooking for the trip was done on my Swea 123 backpacking stove. I’d bought it at a garage sale a few years earlier, and it served me well. It sounded like a blowtorch, and only seemed to have one setting: wide open. But it fried fish and boiled water really well, so it did everything I needed.

The fish would be breaded in Bisquick and fried in Crisco. About the time we had the fish ready to cook, Karla would be ready to cook them. In less than 30 minutes, we went from beaching the boats to a delicious meal.

Northern pike were easy to catch and tasted great!

That became a tradition with Mike and me for the next few weeks. Generally, we paddled hard in the morning, so we could get some mileage in before it got too hot. We’d take breaks near promising fishing spots, and catch enough for lunch. Then, I’d clean the fish while Mike set up the cooking gear.

The golden-brown fried fish would have tasted good anytime, but they were especially delicious after paddling for several hours. Like as not, then we’d roll out our sleeping pads in the shade somewhere, and take a quick snooze to aid digestion.

Mike did great when it came to setting up the tent, building fires and fishing, but he couldn’t swim very well, and seemed afraid of the water. Mike had taken swimming lessons, but wouldn’t get into water over his head.

That had to change. At one of our first camps with a swimming hole, Karla and I decided to further his education.

Mike figured something was up when I reviewed the basic strokes with him on the bank and showed him again how to tread water.

“Why do I need to know this?” he asked suspiciously.

“Because you’re about to do it,” I answered. Karla was dogpaddling around in the swimming hole, looking for some deeper water.

“Mike, there won’t be enough time to practice if we upset the canoe,” I said kindly and patiently. “So, you’ll have to learn to swim,” I grabbed him by the arm and started for deeper water, “Right now!”

After a few moments of inspired splashing, he was treading water like a pro. He looked astounded, and was soon grinning while he swam around the little pool. I made him swim, non-stop, about 15 yards to the other shore.

“You’ve got to remember this,” I told Mike. “Not many people have swum across the Mississippi River!”

We all cheered, and all of us swam across and back, too.

After his first swimming lesson, Mike took to water like a duck. He was soon paddling around whenever it got hot, and he quickly learned several more strokes.

On hot days, we’d each take hold of one of the canoe ropes, and drift along in our life jackets with the current while we cooled off. While we bobbed along, we talked about the river or life or I told stories, reveling in the sound of my voice and a captive audience. It is, all in all, a very enjoyable way to travel on a hot day.