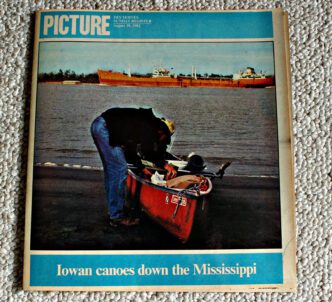 Al and Karla finished their vacation at Lake Winnibigoshish, packed their gear and headed back to Iowa on a cold, windy day.

Lake Winnibigoshish – also known as Lake Winnie – is the fifth largest lake in Minnesota and covers 67,000 acres.  It is well known as one of the finest walleye fishing lakes in Minnesota. The Mississippi River flows through Winnie’s center. Its widest spot – 11 miles –  is also the Mississippi’s widest spot.

After saying good-bye to the Iowans, Mike and I paddled along the lake shore line for couple of hours until we came to Jud’s Resort. While I warmed up with a cup of coffee and Mike drank some hot chocolate, the resort owner, named Jud, warned us about the lake.

“Winnie is wide and shallow,” Jud said. “The wind really whips up the water. By the time you got out in the middle, there might be five or six foot waves. You’d think you were on the ocean.”

Jud’s warnings didn’t change any plans, since I never intended to paddle the 16 miles straight across the lake.  If it took two days to go around the lake, that was OK.

An excellent side trip, Jud told us, would have been  to Cut Foot Sioux Lake on the northeastern side, where the Turtle and Snake Indian Mounds are located. One mound is in the shape of a turtle, about 25 by 30 feet, with the head pointing north; around the mound is a snake with the head and tail meeting and pointing south.

The mounds come from early Minnesota history. The region originally belonged to the Dakota but was coveted by the Ojibwe for its rich resources. In 1748, a major battle ending in the defeat of the Ojibwe was fought on the spot where the mounds now stand. To commemorate the victory, the Dakota built the turtle with its head pointing north to signify that the enemy had been driven in that direction.

The Ojibwe, returning later that year, surrounded and massacred the Dakota. The Ojibwe built the snake around the turtle to signify that the Dakota had been surrounded and annihilated. The snake’s head pointed south as a warning to other Dakota tribes and as an indication of the future path of Ojibwe conquest.

After leaving Jud’s, we made pretty good time for the first hour or so, even though the breeze did make the water choppy. We came to a bay and decided to paddle straight across it.  The distance looked to be about a mile or so – or about 20 minutes worth of paddling. There didn’t seem to be much danger involved.  (Note these words –  they’ve gotten me in trouble more than once!)

Thirty minutes later, we were out in the middle of the bay, and it appeared to be a storm at sea. Four-foot waves threatened to swamp us and the rain and wind soaked us to the skin. We didn’t dare take on the waves head-on, because the front of the canoe would have submerged. The waves were too high to see over, so we’d get to the crest, look quickly to check for rocks, then plunge down into the trough.

Before the canoe hit the bottom, I’d give a quick turn with the paddle to turn the bow, so we’d slide sideways and the next   wave would pick us up.

We had to paddle constantly to make any  headway. My arms were getting really tired, and the waves kept getting bigger. Once I risked a quick look over my shoulder at Mike. He had a big grin on his face.

I  was almost in that condition myself. All we needed was to hit a rock, and the canoe would get smashed. It would be one hell of a rough ride to shore in all that rough water. It started raining harder, and the wind and waves died down. Even the two-foot waves were enough to dash us against the rocks on shore though.

I started looking for the best place to try to get to shore, about 400 yards away. Mike yelled something. I could barely hear him over the rain and  wind.

“We’re almost there!” I shouted back. “What did you say?”

“I said, why don’t  we get out and wade?” he yelled again. “I keep hitting the bottom with my paddle and my arms are tired!”

Mike, with the longer steering paddle had been testing depths as we went  along. It was true – the water was only about 20 inches deep.

We tied the canoe ropes to our lifejackets, got out and headed for shore.  The only danger would have been if one of us stepped in a hole or tripped, and then the ropes and life jackets  would have prevented any problems.

Once inside the sheltered bay, the water calmed down. Soon, we were walking in ankle-deep water 100 yards from shore. I led Dunderhead along like a pack mule.

Mike got bored, walking along with me, so he went to shore and played beach comber. In a short time he found a minnow bucket, several bobbers and a large feather from some bird.

When he got tired of that, he waded out and hitched a ride on the canoe. He pulled his cap down over his eyes, propped up his feet and looked the very picture of adolescent ease.

“Now this is more like it,” he commented. “We’ll have to do this more often – you pull the canoe and I’ll ride!”

“Hey, Mike ,” I asked. “Were you scared out there in all those waves and rain and wind?”

He lifted his cap off his eyes.

“Sure. At times. That was dangerous and we were stupid to have risked it!”

“But, that was the most fun we’ve had yet! It was like riding a roller coaster!” he said enthusiastically. “Why don’t we go out a little further and ride it again!”

I turned around to see if he was serious. He wasn’t.

I continued leading Dunderhead while Mike chattered on about all the stuff he’d found. The feather had to be from an eagle – didn’t I think so, too? – and he didn’t know what he should do with the minnow bucket. He stuck the bobbers in his tackle box.

Winnie erased any doubts I had about Mike being able to handle the rest of his river trip.