Check out the Bark River Bravo EDC for every day carry 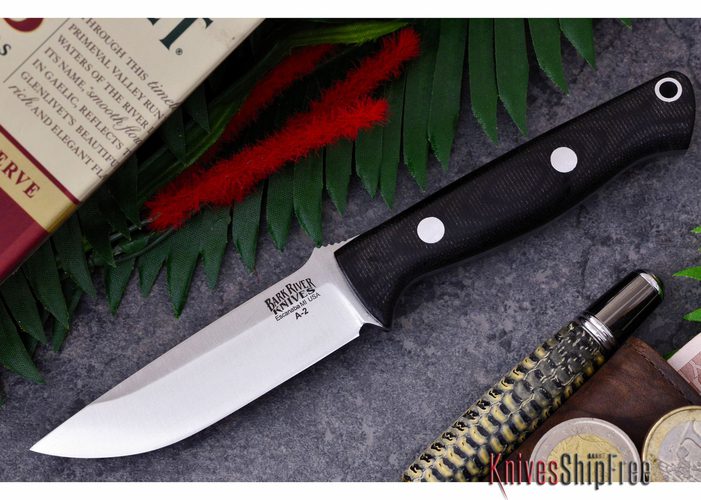 The best Every Day Carry knife is as elusive as that best survival or hunting knife. Check out this Bark River Bravo EDC.

I bought this knife to test. I was not paid to do this review.

What makes a good EDC knife?

Once you decide between a folder or rigid blade, there are still some other considerations, such as overall design, ease of carry, and blade grind and length. And don’t forget local laws!

This EDC knife will be carried on your person, so it must also be able to do virtually everything, from opening boxes and mail to processing small game animals. In an emergency, your  EDC knife may be the only blade available.

I had been eying a Bravo EDC for several months. I always carry a folder, but if situations permit, I prefer small, rigid blade knives for most outdoor activities. I’ve proven to my satisfaction that a well-designed knife with a three-to-four blade can do the lion’s share of most bushcraft and hunting needs.

The Bark River Knives Bravo EDC (Every Day Carry), according to Mike Stewart, president of Bark River Knives, is the company’s most popular scaled-down knife. It is the cousin of the wildly successful Bravo, and if you like the Bravo design, you’ll like the EDC.

The Bravo EDC knife is comfortable on your belt, Stewart claims, and big enough to handle all daily knife tasks.

Here are the Bravo EDC specifications:

In mid-October, the EDC arrived in the mail. Unwrapping the package showed the usual superb Bark River quality. I started working with it immediately in the kitchen. 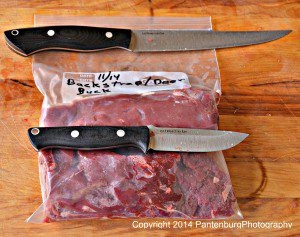 These Bark River Sportsman, top, and Bravo EDC were the only knives I needed to completely process a whitetail deer.

All Bark Rivers come from the factory with a razor sharp edge. The knife worked well for cutting up chicken and slicing venison. Because of the thickness of the blade, the EDC isn’t the best choice as a fruit knife.

I loaned the EDC out to kids at a Boy Scout campout, and it survived a basic firemaking session with flying colors. The kids liked it for wood carving and other whittling activities. To check out the carry-ability, I wore the EDC on my belt during nightly dog walks.

The finale came around Thanksgiving, when the EDC, along with three other Bark Rivers, went on a Mississippi deer hunt. The EDC rode in my fanny pack and was used a lot when I killed and processed two deer.

Compact: On the Mississippi hunt, I carried either a Sahara or Kalahari as my main hunting knife. A Sportsman was used heavily for cutting meat. The EDC was so light and convenient to carry, I didn’t notice any added bulk or weight.

Blade design: The EDC’s drop point is a good choice for a hunting or all-purpose knife. At 3.37 inches, the blade length is perfect for most utility and small game hunting tasks.

The black micarta handle on this Bark River Kalahari got “tackier” when it got blood and body fluids on it.

Handle: I ordered a black micarta handle, because it blends in well on the rack with other kitchen knives. To my surprise, the smooth micarta gets almost tacky when it’s wet. Even though the EDC got completely bloody while field dressing a buck, it never got dangerously slippery.

Spine: Bark Rivers have a 90-degree grind, like an ice skate. This allows for shredding pitch wood or scraping a ferrocerium rod to make sparks for fire starting. A correctly-ground spine can save the opposing razor edge for other tasks.

I ordered the ramped edition. I don’t like the looks, but the ramp proved to be really handy when the knife was bloody. I was able to rest my thumb against the ramp while cutting meat for a secure grip.

Steel: A-2 is wonderful. Its edge-holding ability is incredible. I have traditionally carried a sharpener when I hunt, but I never needed it in Mississippi. After two deer and a lot of knife work, none of Bark Rivers needed sharpening. I did strop all them after the hunt, but that’s because of my obsessive-compulsive need for really, really sharp knives. And because I enjoy whittling paper with a hunting knife.

Convex Grind: Every Bark River has a convex grind. Basically, that means that the entire blade grind comes down to edge. That means there is no secondary edge to be sharpened. In my experience, this makes for superior edge-holding ability and easy maintenance. (Check out this video series on sharpening convex edges!)

Handle length: I have large (glove size) hands, and my Bravo LT or the Kalahari handles on my Sportsman or Sahara fit me very well. My right palm measures four inches across, and knife handles shorter than than sometimes don’t work all that well for me.

But the EDC’s 3-7/8 inch handle was fine. (Another additional one-eighth inch would make the handle better. A half-inch more would make it perfect!) The Bravo handle design is superb, and subsequently, I could use the EDC well.

My wife and daughter can handle this knife very comfortably. But ham-handed people like me might want to consider handle length before investing. As it is, the EDC has found a home and it will probably going to end up in my wife or daughter’s emergency gear.

For people looking for a do-it-all knife that can become part of their wardrobe, the Bravo EDC would be a great choice. The name says it all.