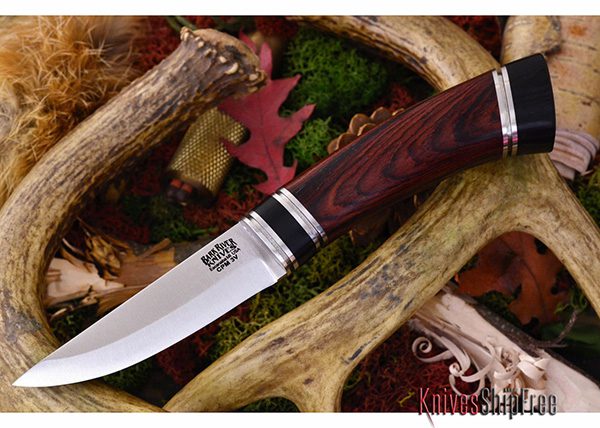 Bark River Knives’ Scandi combines a time-tested design with modern materials. The result is a knife that could end up being your most-used, favorite piece of cutlery.

Bark River Knife and Tool Company did not supply the knife used in this review, and I was not paid to write it.

The Vikings got it right. The raiders all carried some sort of weapon, which traditionally included a big sword, axe, mace or something sharp and pointy designed to cause great bodily injury. 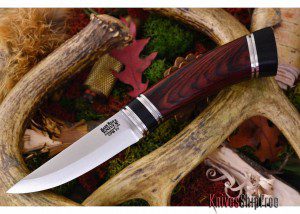 My Scandi has the Cocobolo handle with Black Paper Micarta accents. The inserts are stainless steel. (KnivesShipFree.com photo)

But everybody back then also carried a smaller knife. This was the do-all tool, used for everything from butchering livestock and wild game to serving as an eating utensil. In the Scandinavian countries, this small knife evolved into what is commonly referred to today as a “Scandi.”

By definition, these knives typically have a three-to-four-inch rigid blade, a generous handle with no guard and a Scandinavian-style grind. Only high quality steel is used in the blade.

I’ve been using Scandi-style knives extensively for about 10 years. My relationship with the design started when a local Boy Scout cut himself badly at camp. His folder’s lock failed, and the blade closed on his fingers. Even with factoring in inexperience and poor knife handling skills, that folder proved to be dangerous.

I started looking for a safer, rigid-blade knife for the scouts to use, and hit upon a Mora brand Scandi. The troop bought 40 Mora Model 840s to re-sell to the kids. Because we got a really nice discount (Thank you Ragweed Forge!!!) the knives went for $8 each.

Many of those knives are still in use. In fact, one of our parent volunteers has used his Mora on two deer, several elk and a moose. I have several inexpensive Scandis that get  loaned out to scouts doing wood carving tasks.

Based on that experience, I ordered, and eagerly anticipated, the arrival of Bark River’s new Scandi knife.

Here are the Scandi specs:

I’ve tested and reviewed several Bark River knives, and as far as I’m concerned, the company sets the standard for quality cutlery. I bought my first BR Fox River, traded it back to the company for an Aurora, then proceeded to beat the crap out of it.

The Aurora was first used in the kitchen, then was batonned through firewood, using a rock for a hammer. I cleaned fish, whittled out a fire bow friction fire starting setup, and in general, used and abused the knife much harder that the average person would. For the final torture test, I loaned it to a group of scouts who were learning survival fire making skills.

The success of that Aurora lead to other BR acquisitions. Most recently, I used BRs exclusively on a Mississippi hunt where I harvested two deer.

Here’s what I really like about the Bark River Scandi:

Overall design: The design is understated, and the average Scandi looks kinda mundane. In fact, one scout parent commented he really liked his son’s Mora “paring knife” because it was so handy for everything.

A Scandi style knife is my go-to blade for cleaning small game, gutting fish, whittling and general camp chores. It can easily peel a potato or whittle a wiener stick. If it were longer, it would be a good filleting knife for fish.

A Scandi also a great knife for certain hunting tasks. It works well for skinning big game in areas around the front shoulders, neck ears and eyes. I wouldn’t want a Scandi to be my only hunting knife, but I also wouldn’t want to be without one on a hunt.
Steel: CPM3V is one of my favorite knife steels, because of its edge-holding ability and ease of resharpening. My BR Sportsman has become my most-used kitchen knife, mainly because it holds an edge so well. My wife and daughter reach for it first when they have to cut anything.

Before I discovered CPM3V, I used a variety of  hunting and bushcraft knives with different steels. I always carried an EZ Lap diamond sharpener for edge touch-up in the field. On my Mississippi hunt, I never needed to sharpen any of the BRs that were used.

Full tang blade: The blade steel runs completely through the handle. It is a so-called “rat-tail” tang, which is exceptionally strong.

Handle: Newcomers look at a Scandi, and might wonder how safe it is to use. After all, isn’t it possible for your hand to slide down  the handle and onto the blade?

I’ve never had a problem with that, and apparently the Vikings didn’t either! If I were using a Scandi for fighting (Perish the thought!) I’d want some sort of hilt. Likewise, if I was fighting bears, dueling on sandbars or hunting hogs with a knife, I’d want some sort of  guard to keep my hand from sliding down the handle onto the blade.

As it is, the Scandi handle works really well.

The Micarta handle on my Kalahari Hunter never got slippery, even during a messy field dressing task.

Handle materials: There are all sorts of choices available. My experience is that the BR micarta and wood handles tend to get almost tacky when they get wet. In one instance, I had to dip my hand and the BR Kalahari into the chest cavity of a downed deer. The heart-lungs shot had resulted in a puree of blood and tissue. The micarta didn’t get slippery. Same with the desert ironwood on my Sahara.

Chose the material you want. I opted for pretty.

Sheath: The Scandi comes with a well-designed, sturdy leather sheath. It will work very well for keeping the knife safely secured. I added a d-ring to mine to make it a dangler.

Spine: Don’t overlook the spine when it comes to survival tools. I prefer a spine that is ground with 90 degree angles, like an ice skate is sharpened. The Scandi has this edge and it is useful for scraping bark off tree limbs, shredding tinder and shaving pitchwood off a block. In a pinch, you can use the Scandi’s spine to scrape a ferrocerium rod to make sparks for firemaking.

Point: The Scandi has a sharp, upswept point that is a good, overall choice for a knife that will end up doing everything.

No choil: A choil is a flattened area on the blade, just ahead of the handle hilt. The idea is that this allows you to “choke up” on the blade for fine work.

I don’t like choils. The choil takes up one of the most useful parts of the blade. It’s counter-intuitive – I’m supposed to put my trigger finger next to a sharp blade to use the choil. This negates the handle design that is supposed to protect my hand from sliding up on the blade. (?)

Made in the USA: All BR knives are made in Escanaba, Michigan. Call the factory and someone with a mid-western accent will answer the phone. It’s not uncommon for company president Mike Stewart to pick up the phone. BR employees are paid a fair wage, pay taxes, and contribute to their community. Buy American!

Unconditional guarantee: If your BR knife or sheath ever breaks or is damaged or whatever, Bark River will fix or replace it. Pretty simple!

Price: The BR Scandi is a handmade, high-end knife with expensive components. It can’t be made cheaply. A Scandi will cost about $250 for the most inexpensive models, and the really exotic handle materials can be more spendy.

But since I had already checked out the company, the blade steel, knife design, handle and customer service, I didn’t hesitate to order a Scandi with exactly what I wanted. I anticipate this knife will perform at least as well as other Scandinavian knives I have used.

In fact, my newest Scandi is almost too pretty to use hard.