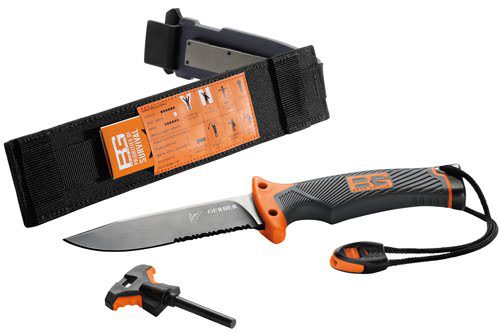 I bought this knife. I received no compensation for writing this review.

I have avoided reviewing any Bear Grylls survival gear. I think Bear does crazy, foolhardy things on his show in the name of entertainment and sensationalism, and that somebody will die or get seriously injured following his line of crap.

But somebody is buying his line of survival products. In 2011 the Ultimate was the best-selling knife in the world. Gerber now makes the Ultimate Knife with a fine-edge from the top of the handle to the tip of the blade. There were some issues with the first series that came out two years ago, but the upgraded Ultimate model has apparently dealt with them. 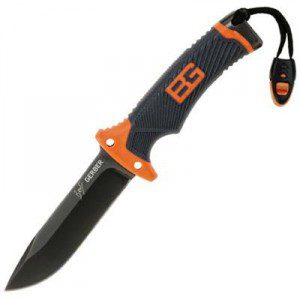 I have received several requests asking for opinions  about the new knife. So here we go.

On first blush, the knife has some features I like, such as the full-tang, five-inch drop point blade, a soft, easy to grip  handle, and a ferrocerrium rod that fits in the sheath. It has a bright orange trim on the handle, which is important on a survival knife. People concerned with concealment can always cover the orange with camouflage duct tape.

Then I tried the ferrocerium rod with the specially-ground part of the blade. Ignition sparks were quick and sure. The ferro rod is top quality, and it throws a hot spark.

There is a diamond sharpener on the back of the sheath. It works fine, but most people probably don’t have the skill to use such a sharpener.

I didn’t like the sheath. The carrying loops on the back are too small for most belts, and it doesn’t look particularly sturdy. The plastic part of the  sheath appeared well-designed – all it needs is a better holder or platform.

Survival instructions: These are a collection of myths and misinformation. Some of the skills shown are way beyond a beginner to intermediate’s skill levels, and trying to learn and implement some of them during a survival situation is a recipe for disaster.

Overall, I’m very lukewarm about this knife. It relies too heavily on Bear Gryll’s celebrity and too little on sound design and quality. While it’s not a really bad knife, it is just not a very good knife or a knife I would stake my safety on.

I won’t buy another Ultimate. But I would suggest this to Gerber: Take your knife design, leave the handle as it is, and put some good steel in the blade. Keep the plastic part of the sheath, with the ferro rod, and attach it to a better platform that allows for comfortable carry. Get rid of the diamond sharpener.

Stay with Bear for the PR and advertising aspect –  he is fooling millions of people with his survival shenanigans  and you are benefiting too. But dump the “Priorites of Survival” tips and get an expert, such as Peter Kummerfeldt, to write something practical.

Do some tweaking  – then you will have a quality product you can be proud of.