Bamba Forge offers hope, job skills to Ugandan war orphans and great knives for the rest of us 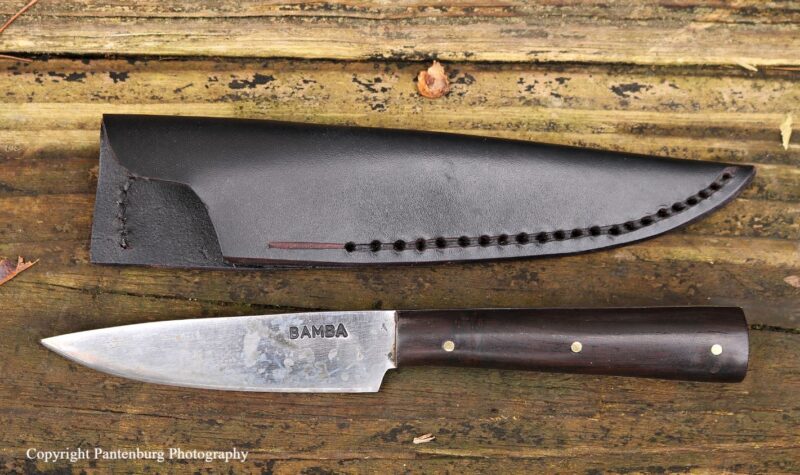 Northern Uganda had suffered from civil unrest since the early 1980s. But a small knife making group in the village of Bamba is bringing hope to war orphans and at risk young men.

Want to help? All you need to do is buy one of Bamba’s quality, handmade knives.

The Bamba knife never made it out of the kitchen. 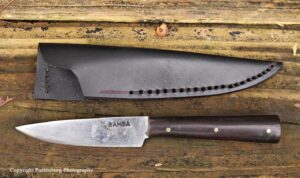 Bamba knives are handmade custom products, produced with hand tools, one at a time.

My wife Debbie, a very dispassionate and thorough knife tester/user, used the Bamba to prepare dinner the night I got it.

“This one stays in the knife drawer, and you don’t need to take it to hunting camp or out on the Mississippi River,” she pronounced. “It’s a perfect kitchen knife.”

I’m a sucker for handmade anything, and if proceeds from a sale benefit a worthy cause, I quick-draw my wallet.

First, here’s the worthy cause part.

Conflict and violence have plagued Uganda since independence, from Idi Amin’s military coup in 1971 to the 14 insurgencies since Yoweri Museveni’s National Resistance Army/Movement (NRA/M) took power in 1986. (according to Global Security.org) Hundreds of people were killed in the rebellion against the Ugandan government, and an estimated 400,000 people were left homeless.

Uganda’s economy is still in shambles, and there are very few jobs or ways to make a living. North of Uganda’s capital city is the village of Bamba where the local men are running a forge. The forge teaches orphans and at-risk men of this area to learn knifemaking by hand, providing them with the skills and means to support themselves.

Here are the Bamba knife specs: 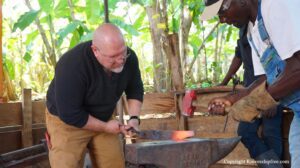 Blade thickness: The Bamba has a thin blade. I estimate it to be about 1/16-inch thick. Since all the blade are hand-forged, thickness will vary slightly.

Steel: High carbon steel from a variety of sources, including leaf springs from vehicles. The steel is re-forged and tempered by hand, using old time hand forging methods and hand tools.

Handle: I don’t know what the wood is, but it is locally-sourced and beautiful.

Bamba knives are marketed by Knivesshipfree.com. All proceeds from sales go directly to buying food and supplies for Bamba Forge. KSF donates the entire sales price, shipping costs, packaging, man-hours, and taxes directly to the non-profit. 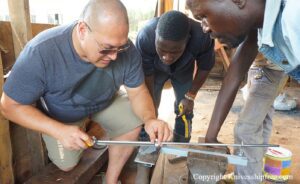 Jay Rouch of KSF got involved with the forge through the internet knife community about five years ago.

“Tim Troyer (founder of Bamba Forge) does tutorials on FaceBook and YouTube,” Rouch said. “I did one of his build-alongs on YouTube. We met at the BLADE show in Atlanta and became friends.”

Bamba Forge was started by Troyer, the founder of The Reckoning International (a non-profit development organization) with the help of Professor Moses Tenywa a pastor and university professor in Uganda. Troyer wanted to combine his love of knife making with a desire to make a positive, lasting impact on the village of Bamba.

This lead to trips to the forge, where experienced knife makers volunteered to teach the workers.

So that’s the feel-good part. But those warm-fuzzy feelings won’t last long if the knife doesn’t perform as expected. Here is how the Bamba worked out.

Steel: I don’t know exactly what the steel is. In use, it feels like it may be 1075 or possibly 1095 high carbon. The blade is no A2 or CPM 3V  but it holds an edge well and touches up easily. Any carbon steel blade will rust if left unattended, and a patina may build up with use. I like patina – it shows the knife is a user. (Here is how to force a patina on a high carbon blade.)

Grind: Flat ground with a micro bevel. The knife is a fine slicer.

Handle: The handle is long enough for my large hands, but well-designed enough that my wife can use it easily. No handle is ergonomic for everyone, but the Bamba handle worked really well.

Point: This drop point would work well for most big game applications. It doesn’t appear to be sturdy enough for splitting a ribcage or disjointing a deer carcass, but the blade has enough belly to make it a good skinner, particularly around the neck and front shoulders.

Do you need a Bamba knife?

The best endorsement for a product is constant use. Ours is used a lot already. I tried to order a Bamba for my sister, Karla Pantenburg Moore, (one of the most savvy preppers/homesteaders I know), but they were sold out almost immediately.

My wife gave Bamba knives the highest possible endorsement. Debbie wants me to order an eight-inch chef knife and a three-inch Bamba whenever they come out. And Karla wants one too.