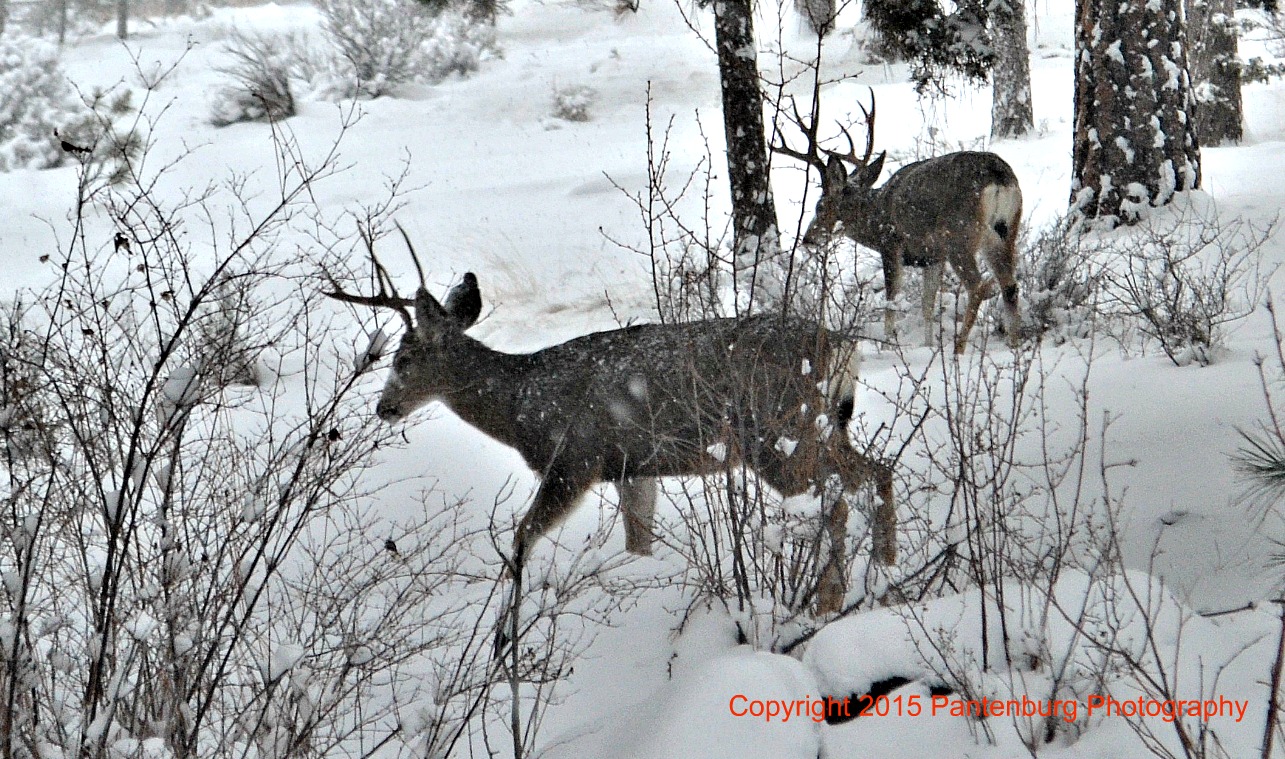 Solve these problems and enjoy the feast.

My kids were raised on wild fish and game meat. So imagine my surprise when my daughter Mary came home after her first semester at college and announced she was now a vegetarian.

The reason for the diet change, Mary said, was the hormones, chemicals, antibiotics and pesticides used in commercial meat raising and processing. And the inhumane, crowded, unhealthy living conditions in chicken houses, feedlots or hog confinement pens. Plus, she didn’t want any GMO-fed flesh. 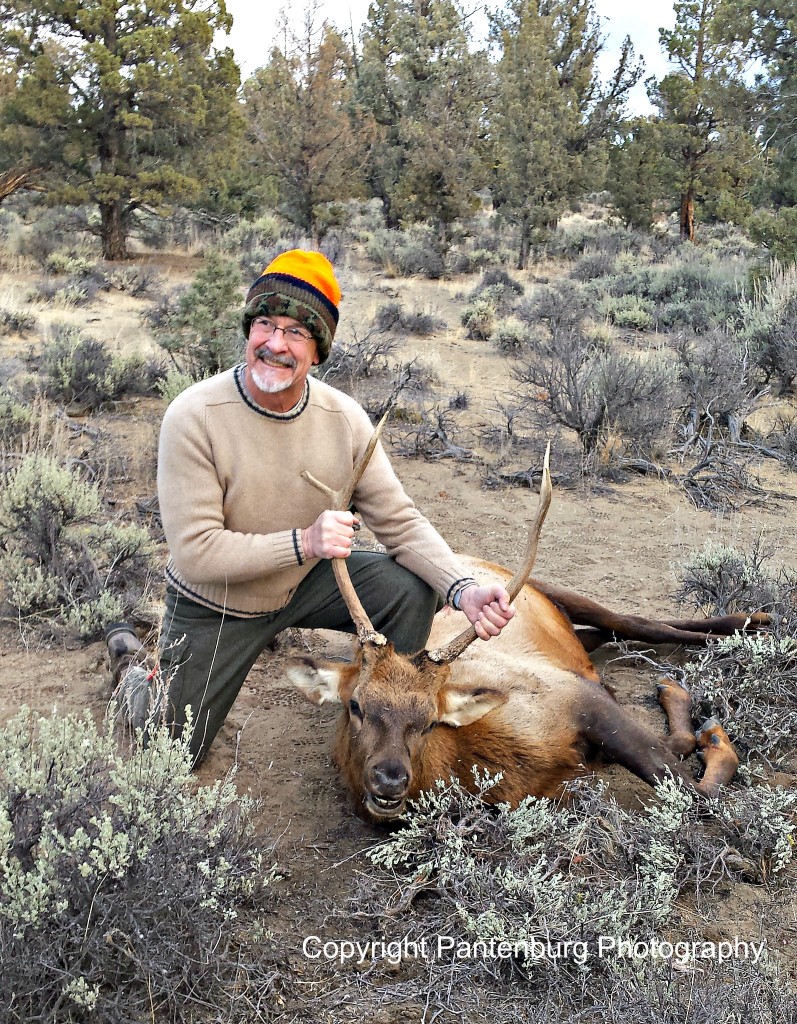 This elk was killed on a cold day, and was skinned and hanging two hours later. The meat is superb.

Then she requested chicken-fried elk strips and mashed Yukon Gold potatoes for dinner. It is her favorite meal because it tastes so good, she said, and the meat was free range, organically raised, and the elk had been harvested humanely.

How many people do you know who won’t eat venison because it tastes awful or “gamey”?

Poor shooting: Good shot placement means the animal drops dead in its tracks or runs a very short distance before expiring. A poorly-hit animal may run for great distances, suffer greatly and be under stress for a long period of time. This will affect the taste, smell and toughness of the meat.

You owe it to the animal and yourself to be a good shot with whatever tool you use for the harvest. My Remington 7mm-08 has killed 24 whitetail deer with 24  consecutive shots. It’s not that I have “American Sniper” shooting ability, but that I wait for a sure shot. What is the best overall hunting caliber? Opinions vary but I have used a 7mm Remington Magnum and 30.06 with great success.

Wrong animal was harvested: When I go hunting, my instructions from my wife and daughter are to kill a meat animal. A trophy bull or buck is old and tough and  doesn’t taste as good as a younger male or  a cow or doe.

I don’t trophy hunt, and don’t need any more antlers in my garage. For control hunts, my first choice is always a female or spike. 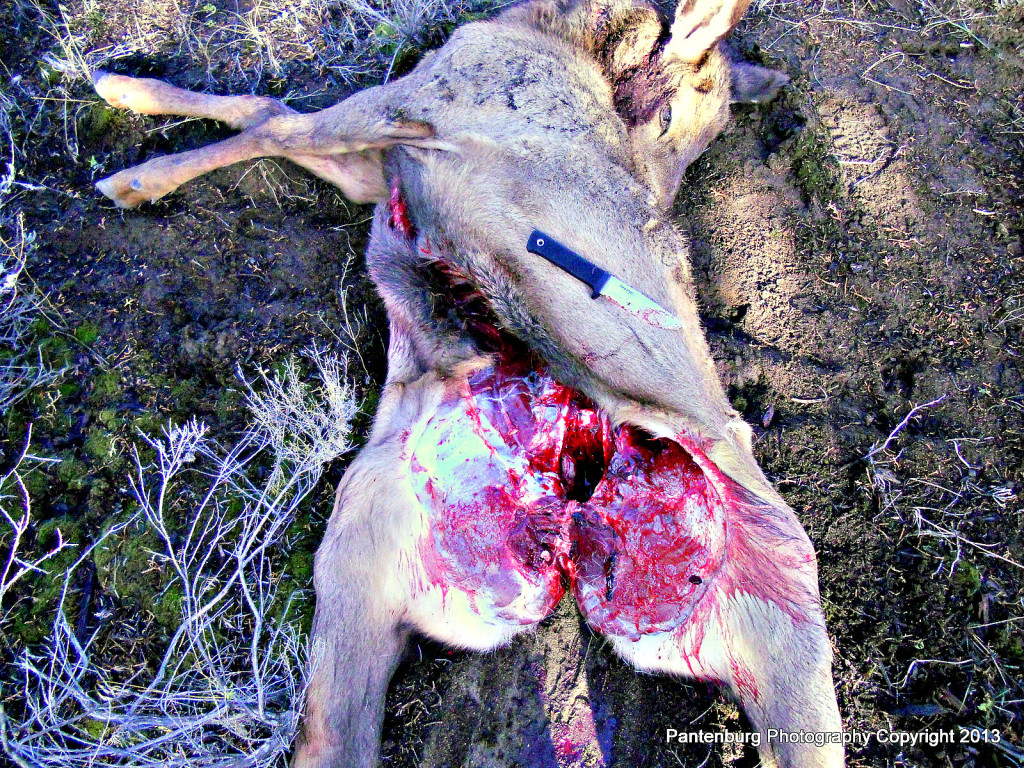 Wrong tools: It’s amazing  how some people will invest thousands of dollars on licenses, guns and bows, cammo clothes and expensive hunts, and have a junky knife.

A knife that won’t hold an edge is dangerous, and doesn’t work effectively. A poorly-designed knife handle is dangerous, especially when it gets covered in blood and other body fluids. A good hunting knife is an investment you’ll be glad you made.

Field dressing: Kill an animal in warm weather and it is a race to take care of the animal. Look on Youtube for field dressing techniques, or better yet, learn from an experienced hunter.

Meat cooling: The sooner the meat is cooled, the better it will taste. In warm weather, get a good, big cooler, and ice down the meat as soon as possible. I like one of those huge 65 to 100 quart coolers – they will hold a lot of meat and ice.

Improper aging: If meat warms up, it starts to rot. Keep the carcass in a cool place. In hunting camp, hang the meat in the shade and cover it with newspapers and a sleeping bag to keep it cool during the heat of the day. Or if there is room, quarter and ice the meat down.

Dirty knives and power saws: One of my pet peeves is unsanitary meat handling. In my hunting group, everyone wears latex gloves, aprons and baseball caps when cutting meat. There is little time saved by using power tools. A Sawzall is quick for splitting a hanging carcass, but bone dust, dirt and hair may get in the meat.

Cut rate processor: If you must take a carcass to a processor, make sure the place is legitimate. It should have USDA certifications posted.  The guy working out of his garage may do a wonderful job, but he may also have cracked hands and a runny nose because of the cool weather. 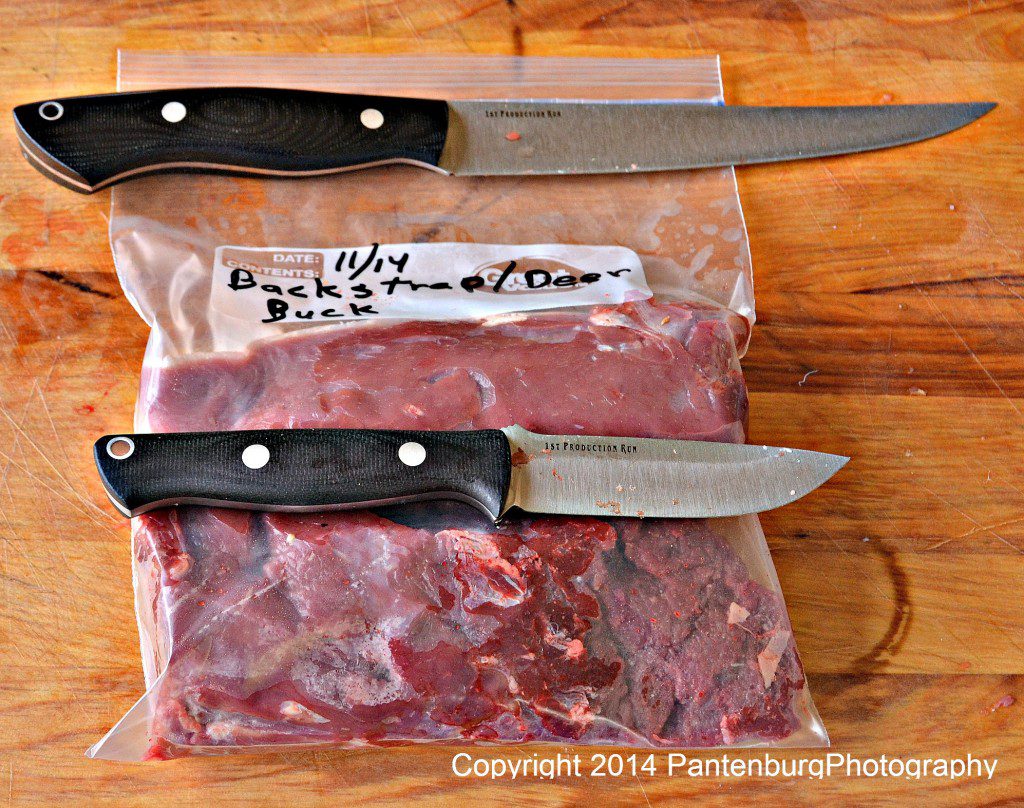 These two knives were all I needed to completely process a whitetail buck.

Do your own meat processing: I like cutting and processing meat. It’s simple and anyone can do it. All you need are several knives, a picnic table and some time. Everything else you need – cutting boards, bowls, etc – is in your kitchen.

My brother Mike and I can take a whitetail buck from a hanging carcass to neat white packages in the freezer in about two hours. Generally, though, a meat cutting party after a successful hunt is a work party, with music, beer and conversation.

Process your own meat, and you’re guaranteed getting your own animal back. A processor might inadvertently mix up your meat with another’s. You don’t want pieces from that rutting big buck that was wounded in hot weather, chased down and shot several times, and then was hauled home in a hot pickup bed.

Bad packaging: I double wrap each cut, first with cellophane to seal it from the air, and then in butcher paper. Tightly wrapped this way, there will be no freezer burn, and the meat will last until you’re ready to eat it. In one case, I deliberately kept a double-wrapped venison steak in the freezer for three years. It tasted fine. I wouldn’t recommend this as a regular practice, but it shows how properly-wrapped meat can last.

Several  years ago, I killed two bucks in Mississippi and flew the meat home to Oregon. I deliberately used see-through Ziploc plastic bags so the TSA people could see what was in the cooler. Even so, they rummaged through the neatly-packed cooler. They could have unwrapped every one to check it out.

Brine: I frequently soak the meat for 24 hours in a Kosher salt and water solution before cooking it. This gets all the blood out of the meat, and can really help reduce the strong flavor. There are other marinades that can also enhance the flavor.

But it depends, and I know people who won’t soak the meat at all. If the buck is in the rut, and has been chased, the meat from it will probably have a strong flavor regardless of what you do. This is when you make it into sausage.