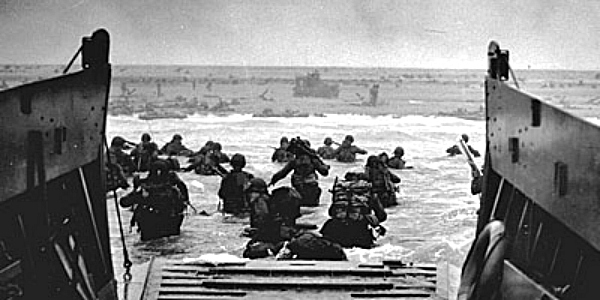 Ahead of the amphibious assault soldiers lay “Fortress Europe.”  Behind them was the rising sea. At stake, was the final outcome of World War II.

Here is the story of an American hero.

I was privileged to interview 12 Central Oregon World War II veterans for a Bend Bulletin Special Section “Vanishing Heroes,” which was published on Veterans Day, 2004.

As a member of the 149th Amphibious Combat Engineers, Private Shotwell landed in the first wave of the Dog Red section of Omaha Beach.

Here is an excerpt from Private Shotwell’s story as he headed toward Omaha Beach at dawn in a Higgins landing craft.

“The noise was deafening. Big guns fired, engines on vehicles roared, men shouted and geysers of water erupted around our craft. It seemed like mass confusion.”

“I felt excited, probably because I had no combat experience at all,” he said. “Like most kids, I had this feeling of invincibility and I though nothing could happen to me.” 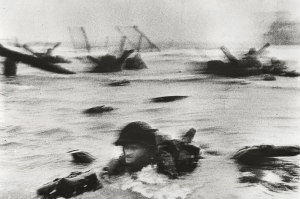 This image was shot by Robert Capra, who landed on Omaha Beach with the second wave.

That feeling “evaporated” as the boat stopped and the front ramp went down. The Germans had every inch of the beach pre-sighted for accurate firing of mortars, machine guns, and 88mm cannons.

The slaughter started before the soldiers disembarked, and the first wave was almost decimated.

Shotwell and the survivors took shelter behind a “shingle”, a pile of rocks with a depression that the waves had washed up, and they were pinned down for several hours. He said the soldiers “were desperate to move forward.”

“To lift your head up was almost certain death from a sniper or machine gun,” Shotwell said. “But we couldn’t stay behind the shingle, because the tide would be coming in.

“Bits and pieces pop into focus…a hand. An arm with no body around it. A foot. A helmet with a head still in it,” he added. “I wondered if the next shell would be mine.”

By late afternoon, enough equipment had come ashore that the engineers could start clearing the wire and obstacles. In the face of heavy fire, Shotwell and other engineers blew holes in the wire and advanced to the bluffs.

They stopped at nightfall, and Shotwell, exhausted, “slept fitfully” about halfway up the cliff. 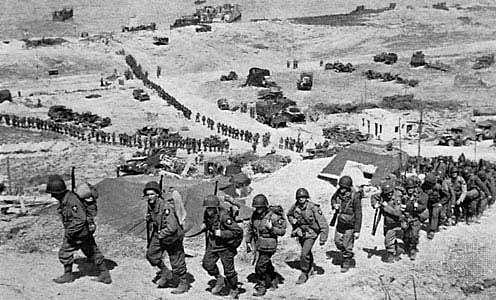 By night fall of  June 6, about 175,00 Allied military personnel were ashore in France. But the cost had been very high – some 4,900 died on the beaches and  in the battle further inland that day.

Of the 40 combat engineers who landed at Dog Red in the first wave, only four were alive at the end of the day. The next morning, Shotwell reached the top of the cliffs.

He looked out to sea, over the armada of 5,000 anchored ships, with a sense of disbelief. Shotwell was incredulous that he was still alive and not wounded.

Shotwell went on to fight in four major combat actions before the war was over. He was recommended for the Silver Star for his part in the crossing of the Rhine River in Germany.

Like many veterans, Shotwell rarely mentions his service, and initially, was reluctant to be interviewed for the “Vanishing Heroes” project.

His memories have “thankfully softened,” he said.

“War memories are best held in limbo,” he said. “They take on a softer glow that way. Most of my memories of World War II are of the pleasant things. I try to forget the bad things.”

But Shotwell does remember the attitude that helped him and his buddies get through the hell of Omaha Beach.

We can’t thank these WWII service members enough, so let’s allow that respect to include  ALL veterans of ALL American wars: Thanks, and God bless you!