Survive this: Six maps you should have for urban disaster evacuations 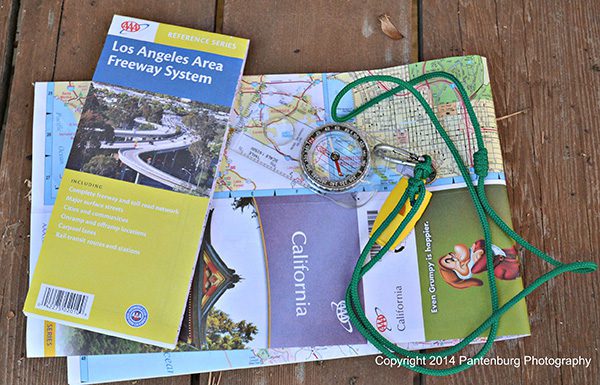 What kind of maps do you need to function in urban and/or wilderness situations?  What happens during a disaster where you are forced to evacuate  and need to travel by road, then go off road and finally cross country?

I never go anywhere off the pavement without a compass and topographic map of that area.

But let’s assume an urban disaster scenario, where you need to leave your home. What maps do you need to get to safety? (And don’t plan to rely 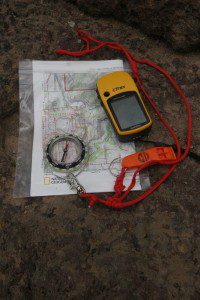 The triad of land navigation is the GPS, map and compass. Don’t take a GPS without a map and compass, and make sure you have the right map for the area.

on a GPS. They are as reliable as their batteries, and constant use could mean the unit is soon powerless. Also, any electronic device can break or just quit working.)

Start your navigation plans with a good compass. I prefer one with a clear baseplate that is designed to work on maps. Invest in a good one with declination settings, and then learn how to use it. The smaller compasses that come with some survival kits are only useful as backups and  for giving you a general direction.

City map: Your evacuation from your home will start with this map, so get one with the finest detail possible. This map can help you figure out alternative street evacuation routes if bridges and/or overpasses are closed. Also, gridlock on major highways and freeways is a given, so you might need to plot a course around them.

Topographical map:  A topo map is a three-dimensional view of an area. Looking at it, you can get an idea of the terrain. Here’s a good description.

According to the Geospatial and Analysis Cooperative of Idaho State University: “The concept of a topographic map is, on the surface, fairly simple. Contour lines placed on the map represent lines of equal elevation above (or below) a reference datum. 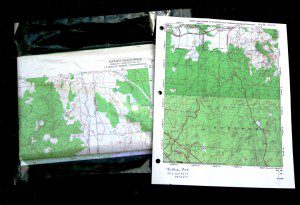 Topographical maps show the terrain features of an area.

“To visualize what a contour line represents, picture a mountain (or any other topographic feature) and imagine slicing through it with a perfectly flat, horizontal piece of glass. The intersection of the mountain with the glass is a line of constant elevation on the surface of the mountain and could be put on a map as a contour line for the elevation of the slice above a reference datum.That allows me to create a custom map of wherever I want to go.”

I have the National Geographic mapping software for my home state of Oregon, so I create a custom topo map for every outing. I print them out on standard-sized letter or legal-sized paper. These sizes fold nicely in half and fit in a quart Ziploc plastic bag. This bag, in turn, rides in  the thigh pocket of my BDU pants. The map is easy to pull out and check, which means it will be.

During an urban evacuation, you might need to go cross-country through a park or open space to avoid crowds or other potential dangers. The city map may give street details, but it may not show water obstacles or other physical barriers. With your topo and compass, you should be able to plot a course effectively.

State Highway map: This gives the big picture of your situation. It shows major highways and roads, and gives general directions. It is useful for figuring out where to go once you escape the urban scene.

Forest Service map: I carry this in my car in central Oregon. Commonly referred to as a fire road map, this is a large overview of the national forests and public lands. Most importantly, it shows fire and logging roads.  The map doesn’t show if the roads are improved or not, so don’t depend on this map to tell you if you can drive on it. In some instances, the roads may have overgrown into trails. You may be able to hike or ATV them in the summer, or in the winter, snowshoe or operate a snowmobile.

These maps are particularly useful for big game hunters. Kill an animal, and you need to know where the nearest road or trail so you can get the meat out. It can also help you figure alternative routes in wilderness areas. Once you get to the rural or wilderness areas, a good compass, this map and the appropriate topos will be worth their weight in gold.

These four maps should help you get out of town. Here are some others that could also prove to be useful:

History maps: I combine my map and history obsessions and buy any historical map I come across. Some of them, such as the Oregon Trail or Lewis and Clark maps show the routes used by historical figures. While the trails may be obscure right now, that doesn’t mean they aren’t useful. Overland pioneer routes were established because wagons or pack trains could cover them. Those trails might be a good thing to know at some point.

River charts: My fishing and map nerd-ism combine again with these charts. Every navigable river in the United States has detailed charts showing river terrain, danger areas, and topography of the stream. These charts allow a traveler to plan a river evacuation or trip. I carried a set of Mississippi River charts on my end-to-end journey in 1980. It was easy to plan overnight stops, or decide where to pull out.

On smaller rivers, such as Oregon’s John Day, or the  Deschutes River, the maps can show take-out points, landings and water dangers.

Hunting maps: Put out by your state fish and wildlife departments, these are useful to anyone who goes into the wilderness areas. I carry one to see the boundaries of my hunting unit, road closures and to some extent the terrain.

None of these maps are of any value if you don’t know how to read and use them. A good training activity that includes some exercise could be to take your compass and maps, create a possible evacuation scenario and practice navigating somewhere using alternate routes, streets and cross country travel.

So check out these maps, practice with your compass, and give some thought to how you might get out of town if you had to.
Please click here to check out and subscribe to the SurvivalCommonSense.com YouTube channel – thanks!