Review: One good shotgun | Make mine a Remington 870

If you could only have one firearm, what would it be?

My relationship with the Remington 870 is deep and long. I bought my first 870 Wingmaster 12 gauge in Mississippi, along with a slug barrel to use for deer hunting in 1982.

Then things escalated. My friend and co-worker, the late Fred Messina, was a partner in a gun store in Vicksburg, Mississippi. Over coffee one morning he told me about a going-out-of-business sale that would start the next day.

The Remington 870 Wingmaster has blued steel and a walnut stock and forearm.

“Go down to the store first thing in the morning,” Fred advised. “We’re selling out at wholesale prices. You’ll never get better deals.”

I made a quick call to my brother Michael Pantenburg – he was about to graduate from high school, and yeah, he wanted a 12 gauge 870 Wingmaster with a modified, ventilated-rib barrel if the price was right. I needed an additional 12-gauge barrel for mine, and I also had a shopping list of various reloading materials.

I was at the store when it opened, went through the shotguns, and picked the prettiest wood for Mike’s 870. You know where this story is going. A 20-gauge Wingmaster also left with me, along with several barrels for it. The gunpowder, primers, wads and shot I bought lasted me for years.  Only a deliberate, gut-wrenching effort got me out of the store before the rent, car payment and grocery money were spent on firearms stuff.

There were never any regrets about the investment!

There are several shotguns I rely upon. My Dad’s 16 gauge World War II drilling has slain a pickup load of pheasants and upland game. My CZ side-by-side 20 gauge gets regular use. And sometimes, the simplicity of a single-shot, break-action 20 gauge is really appreciated. Everybody needs a .22 rifle.

Since that original spending spree, I’ve hunted everything from doves to deer with a 870. The 20 gauge worked really well on doves in September, and it was a great choice for squirrel and rabbit hunting in the fall. Iowa pheasants and quail were readily harvested after the corn was picked. Using copper-plated lead shot (this tells you how long ago that was!) the 20 gauge killed ducks dead in the air at 40 yards. The 12 gauge with buckshot was a good choice for deer hunting in the Mississippi swamps.

An all-weather 870 12 gauge with a three-inch chamber was added to my 870 collection because I found a good deal and wanted it. That black 870 was my oldest son Dan’s choice for a hunting gun. When he moved out, that 870 went with him.

The 870 came on the market in 1950, with more than 11,000,000 sold since its introduction. It became the best-selling shotgun of all time. The 870 is widely used by the public for shooting sports, hunting and self-defense, as well as by law enforcement and military organizations worldwide. (What are the best firearms for a beginner? Read this.) There are solid reasons for this popularity.

Stock fit: I’m your average American male, at 5′ 10″ and 188 pounds, with a 16-1/2 by 33 inches shirt size. Since most things are made for the average person, most things will fit me. The 870 stock is the perfect size for me, and that contributes to my ability to hit with it.

Versatility: My original 870 is still my favorite duck gun. It works fine on pheasants, quail and chukar. Put on the slug barrel and load the gun with slugs or buckshot and you have an incredibly effective weapon for stopping dangerous big game or human predators. The 870 is right at home in the sporting clays arena, and works just fine on trap and skeet.

Reliability: I’m still waiting for the first jam after shooting thousands of rounds. My 870s have reliably digested everything from quality ammunition, to hulls that have been reloaded multiple times.

Law enforcement people bank on that reliability. I appreciated that after talking with my friend Mark Denham, a Mississippi Highway Patrolman. Each officer carried a 12 gauge 870 in the rack on the front seat console. A .223 Ruger Mini-14 was also at hand. Both firearms were chosen for knockdown power and reliability.

This tactical Remington 870 12 gauge has an 18-inch barrel and a seven shot magazine capacity. It is a potent fighting weapon many law enforcement agencies rely on.

Barrel interchangeability: You can swap out barrels easily. Mississippi and Iowa had different deer season dates in the early 80s. The Mississippi season was earlier, so I would use the slug barrel, then mail it to Mike in time for the Iowa deer season. Mike would ship it back when the season was over. That smoothbore slug barrel with factory open sights harvested a lot of deer. It was surprisingly accurate with rifled 1-1/4 ounce Federal slugs.

Handling: My favorite duck gun in the greentree reservoirs of the Mississippi River flyway was my 20 gauge 870. The protocol was to don waders, slink into the swamp, lean against a cyprus tree and blow a feeding cackle on my call. Shortly after dawn, the sound of whistling  wings could be heard. Shooting around and between the trees as the ducks rocketed through took some skill and considerable luck! A light, fast-handling 870 was ideal for the circumstances. 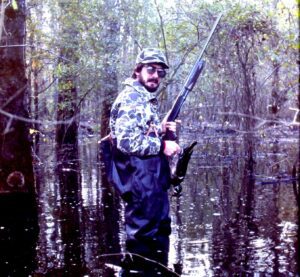 Hunting in the greentree reservoirs in the early 80s. In this instance, I was carrying a Browning 20 gauge.

Weight: My 20 gauge Wingmaster weighs in at 6.25 pounds, and a 12 gauge weighs between seven and eight pounds, depending on the model. For hunts where there will be a lot of walking, as in my beloved Iowa pheasant hunts, the lightweight 20 gauge shines.

In the duck or goose blind, weight is less of an issue than knockdown power. A 12 gauge with a three-inch chambering and long, full-choke barrel works well.

Add-ons: The 870 has add-ons galore available, and you can make your Remington look however you want it to. Being from the old school (and just plain old!) I still prefer the blued steel and walnut of the Wingmaster.

Disassembly: Any hunting shotgun needs to be easily taken apart and reassembled for cleaning. The 870 is a snap to disassemble. Switching barrels is easy. My 870s have been plastered with mud, drenched in rain and sleet and, once, dunked in a greentree reservoir when I tripped over a log. Because of the ease of disassembly, my 870s can be easily wiped down and cleaned.

That depends. First decide if you really need any sort of firearm. Then get some training, and go out to the range and practice.

A hunter and/or homeowner can’t ask for a more reliable defence weapon. It is the firearm I reach for when something goes bump in the night. The reassuring slicky-slick when a round is chambered may have a  deterrent affect on any would-be perpetrator.

If you can only have one firearm, the 870 would be it. So all things considered, yeah, I do think you need an 870.