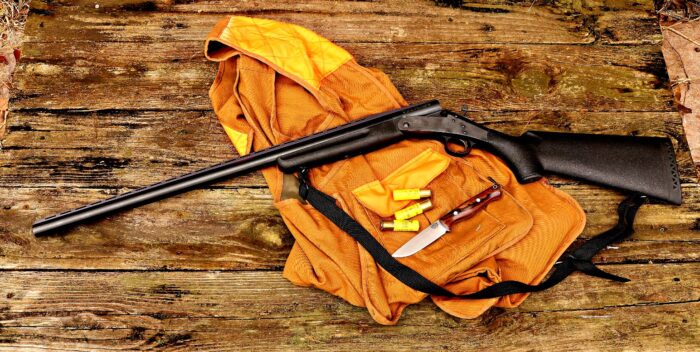 Here is why a simple, single-shot shotgun may be the best choice for a beginner and a valuable addition to your preparedness battery. 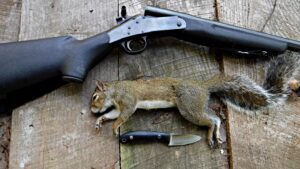 A break action single shot is one of the safest firearms available, and it is a proven game-getter.

I like single shot firearms. My first shotgun was a bolt action 20 gauge Mossberg I got when I was 15. I like the gun and still hunt with it occasionally some 50+ years later. But the Mossberg is a not a fast shooter when it comes to followup shots. Though it has harvested a pickup load (at least!) of squirrels, rabbits, pheasants, quail and ducks, I never downed game with the second shot. Basically, a bolt action shotgun is a single shot with a convenient place to carry ammo.

My brother Michael Pantenburg has been hunting with me some 40+ years. He has a full battery of sporting firearms, but he still likes hunting with his first gun – a Savage over/under, .22 long rifle/20 gauge. The gun has been used extensively, and has harvested most Midwestern small game. It frequently goes along on backcountry elk scouting trips to harvest grouse. (Here’s why you need a .22 rifle.)

My Mississippi neighbors are avid alligator hunters. Firearms used for dispatching an alligator are restricted to long- barreled, shoulder-fired shotguns with shot size no larger than #6. My neighbor uses a .410 single shot.

Point is: An inexpensive single-shot shotgun can be an effective hunting tool. But it’s not the best choice for a defensive weapon because rapid follow-up shots are more difficult. My vote for the best defensive shotgun goes to the 12 gauge Remington 870 .

But a single shot can be a valuable addition to your survival battery. The smaller, lighter gun could be used by kids and smaller individuals. Because of the low cost, a break action is a good firearm to be stowed in survival caches. (Here are three basic firearms to start your preparedness battery.)

Safety: A single shot is either loaded or not. Checking on that requires one quick motion. Most break-actions have an exposed hammer, so it only takes a glance to see if the safety is on. 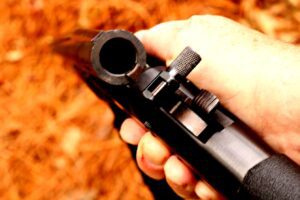 The single shot is either loaded or not. It’s easy to check that.

Teach good shooting habits: If you can only shoot once, and have a slow reload, you’re more likely to wait for a clear, solid shot before pulling the trigger. Semi-automatic firearms, IMHO, can encourage sloppy shooting. (I love my Ruger 10/22 semi-auto, though!) Hunt with a blackpowder muzzleloader, and you’ll soon learn the value of that precisely-placed first shot.

Lightweight and compact: Sometimes you don’t need or want the extra weight of a repeater. When I go deer scouting/squirrel hunting in the fall in Mississippi swamps, a 20 gauge break action usually goes along. I’m looking for deer sign, but there is always a chance a feral pig or coyote might come along. A couple of deer slugs go along in my game vest for that eventuality. The break action is light and compact, the shells are lightweight, and the gun is perfectly adequate for the task. If I harvest a few squirrels or rabbits along the way, so much the better.

These long guns can be the basis for any survival/preparedness battery. From top: Ruger 10/22 .22 rifle; Remington 870 pump shotgun and Remington 700 centerfire rifle.

Gauge:  A 20 gauge 1-1/4 shot load is available in the three inch magnum shells, which ballistically puts  the 20 in the 12 gauge ball park.

Reduced recoil: I figured this out long ago: If the smaller gauges can get the job done, why get beat to death with a larger, heavier 12 gauge that kicks harder? Back when (way back when!) waterfowl could be harvested with lead shot, I several times killed mallards dead in the air at 40 yards with my 20 gauge. With some of today’s excellent non-toxic shot, that efficiency is still available.

Cost: My break action gun is a New England Firearms Topper. I bought at a gun show many years ago. I bought 20 and 16 gauge barrels, and one in .223. (I’ve kicked myself for years that I didn’t also get the 45-70 barrel!) The Topper’s cost was reasonable, and the .223 barrel shoots really well.

New single-shots can be found for under $200. Check out the local gun shop. You may find such a gun languishing in the “used” rack for little cost. Good chance it’ll be branded Harrington and Richardson or New England Arms, both of which came from the same now-defunct American factory. Other manufacturers offer similar single-shots, although most are imports.