Blackpowder review: Lyman Great Plains rifle may be the best choice for a hunting rifle 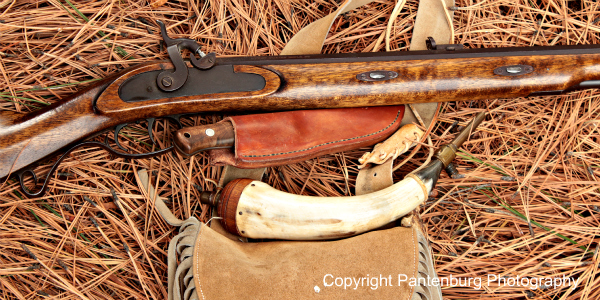 I made this .50 caliber Lyman Great Plains Rifle from a kit in the early 80s. It’s one of my favorite hunting rifles.

Charlie recommended the Great Plains Rifle as “the one I’d get if I was making a kit rifle.”

Charlie started me on the road to black powder addiction. We met when I was a reporter for the Vicksburg Evening Post, in Vicksburg, Mississipi. Charlie made long rifles from scratch, literally lock, stock and barrel. In 1982, I was assigned to write a story about his hobby.

We became close friends, and hunted together. Charlie loved traditional fiddle music, and he became a regular at the old time music gatherings at my home in Campbell’s Swamp.

Charlie didn’t sell rifles, and I couldn’t have afforded one if he did. (Here’s how I finally got one.)

I had bought a .54 caliber Thompson Center Renegade for deer hunting in Mississippi, before I met Charlie, but the rifle and I never bonded. It was too modern-looking and shiny, and it didn’t fit in with how I thought a long rifle should look. I couldn’t find an authentic-looking finished rifle, so I decided to assemble a kit.

I had been eyeing the Great Plains  kit for a while. The Lyman was a replica of the famed Hawken of mountain man fame, and I had wanted one since seeing the movie “The Mountain Men” starring Charleton Heston and Brian Keith. Then along came “Jeremiah Johnson” with Robert Redford. The most recent mountain man movie is “The Revenant,”  starring Leonardo Dicaprio. Any of these movies can push you over the edge toward black powder addiction.

Half the fun is acquiring or making authentic accouterments to match the rifle.

Someday, I wanted a Pennsylvania rifle with patch box, curly maple stock and a flintlock for squirrel hunting, but until I could save up for it, I would use a Great Plains Rifle.

So I ordered a .50 caliber percussion kit from Mid South Guns, in Wagrum, North Carolina, and by mistake, two arrived. The company offered to pay for return shipping, but I decided to buy the extra kit, and finish it too.

My brother Mike was graduating from high school in a few months, and that was his graduation present. We’ve hunted all over the country with those rifles.

Assembling and finishing the kits were well within the skills of anyone with reasonable woodworking skills and some basic hand tools. I finished the stock with linseed oil, and browned the barrel with a commercial browning solution.

I like looking at authentic, traditional black powder firearms in natural settings.

When it was done, my Lyman looked just like I wanted it to. The finish was authentic, and the walnut and steel held up well to extensive use in the woods and swamps of Mississippi. The dull finish was a great camouflage in the deciduous woods I hunted. I soon acquired or made accouterments to match the rifle.

Once the Lyman was finished, Charlie and I went to the range to sight it in.

For a load, I settled on a 180-grain, .495 caliber round ball, with a .15 Thompson Center cotton patch. After considerable experimentation, I settled on Crisco for my patch lube.

I use Goex FFFG powder, at Charlie’s recommendation, for higher velocity. (I’m not telling how many grains.)

To find the best load, Charlie said, start out with a mild load, and keep adding powder to the charge until the rifle report starts to make a crack when fired.

Then, add or subtract powder in five grain increments until you find the rifle’s accuracy load.

The load and rifle has always been much more accurate than I can shoot. Generally, at 50 yards off a bench rest with sandbags, it would group three balls into one ragged hole. I did shoot several 2-to-3 inch groups at 100 yards, which was outstanding for my vision and iron sights. (Tip: Get some Whiteout typewriter correction fluid and paint your front sight with that. It makes seeing it a lot easier in dim light.)

I sighted the rifle to hit dead-on at 100 yards, per Charlie’s recommendation, which made it dead-on again at about 13-15 yards. I check any rifle I’m going to use before every hunting season, but the Great Plains Rifle’s sights have never needed adjustment.

Design: For offhand shooting, I don’t think the old long rifle design has been improved upon. In heavy timber or cover, where a quick, offhand shot may be all you get, the Lyman’s balance and well-designed stock does really, really well. The stock fits my 5’10” height really well. The crescent-shaped butt plate and the drop at the heel puts my cheek right on the stock so the sights are aligned.

All this design work makes for a fast-handling, quick-pointing rifle, and allows for an accurate first shot. And it’s the first shot that brings home the bacon, anyway.

Caliber: The.50 caliber round ball is a deer killer. If I were exclusively hunting elk, I’d opt for the .54. As it is, I’ve shot through both shoulders of a whitetail buck  with the .50 at close to 100 yards. Several other deer at various ranges up to 100 yards dropped in their tracks from a well-placed ball from the Lyman.

Rugged: The mountain men typically carried an extra lock with them on long trips so they could replace a broken one. Other than the lock and trigger mechanism, there isn’t much that can go wrong with the rifle.

I’ve hunted all over the country with the Lyman, in all sorts of weather, and it has never failed to fire when called upon. Mike reports the same success.

Good looks: Several other hunters have commented that the Lyman looks like an original. That’s what I intended. As a die-hard history nerd, I like having authentic-looking gear, because I like to set it up at camp or during breaks and look at it. That means there also has to be an authentic replica knife, period-correct powder horn and an old-timey shot bag.

Fun accouterments: Half the fun of setting up a black powder hunting system is coming up with the accessories. I’ve used replica knives, made my own powder measures and ball starters and in general, totally enjoyed the DIY aspect.

Some knife makers have figured out there is a real nostalgia market for the classic knives that go with the colonial frontier and Rocky Mountain fur trade eras. They’re putting out some classic knives made with modern materials.

So do you need a Lyman Great Plains Rifle?

The actual kill is a very minor part of hunting for me. I’m there for the experience, and nothing makes for a better hunting experience – in my case –  than using the primitive tools of the pioneers.

Annabelle is my favorite hunting rifle.

To quote me, regarding the black powder experience:

Here’s how my ideal, bucket list black powder hunt would  play out: It’s mid-morning in Campbell’s Swamp, Mississippi, and I’ve bagged several squirrels. I stop by a spring where the water gushes out of the ground between two rocks. I have no hesitation about drinking my fill. Then, I prop Annabelle (my flintlock, but it could also be the Lyman) up against a hickory tree. I sink the Grenfell tomahawk in the tree next to the rifle, and hang the hunting pouch and horn on it. I like looking at the ensemble.

I take out the handmade C.T. Fischer knife out and gut and skin the squirrels. I place the carcasses in a culinary-quality mesh bag carried for that purpose. I wash the knife and my hands, then take out some hardtack I baked and some jerky I made from a deer killed last year.

Then I’ll lean back, eat lunch and take in the surroundings. I fit in.  I listen to the rippling water and the sounds of the woods. A quick gust of wind causes a few leaves to fall from the trees. A squirrel chatters up on the ridge, showing the morning feeding time may not be over. I watch quietly, because a buck just might come nosing along the treeline, on the way to get a drink.