Ever since I was a kid, I wanted to travel the Mississippi River like Huckleberry Finn did. In  1980, I canoed from the Mississippi’s headwaters at Lake Itasca, MN to the Gulf of Mexico. This is the story of that journey, and installments of  the tale will be posted here!

There is just something about the Mississippi River. The broad, muddy river that crosses America just has “it.” And I’m not really sure what “it” is. But the Old Man has some sort of irresistible pull and attraction to people like me, and there is no telling where that comes from.

I was a river rat long before ever actually seeing the Mississippi. My fascination with that whole river lifestyle started when Mark Twain crossed my path. In the sixth grade, I was already a hopeless book nerd, and even then, my idea of a good time was reading a new book.

Then, I met “Huckleberry Finn.” And in common with most kids who hung out with him, Huck got me in trouble…

The voice made me jump in my seat. I had snuck in from the playground at recess to read, because Huck and Jim were nearing Cairo, Illinois, and I just had to see what would happen. The baseball game was boring, and besides, what was Huck going to do? He wouldn’t really turn Jim in to the slave catchers, would he?

I mean, wasn’t slavery wrong? But Huck thought he was going to hell if he helped Jim escape? And that horrible name he routinely called Jim – I thought they were friends!

I was so engrossed in Huck’s dilemma I didn’t hear anyone walk up behind me. But my teacher, Mrs. Platte, had apparently noticed my absence. Now, she stood frowning in the door, arms crossed.

“You’re not supposed to be in here!” she said, giving me that withering look that could put the most boisterous sixth-grader in his place. “What do you think you’re doing?”

“Just reading,” I said, giving her my innocent look, and lifted up the book to show the cover.

Maybe a question would help, I thought – that generally made Mrs. Platte happy. It wouldn’t hurt to try, since it looked like I was about to catch hell anyway!

“Have you ever seen the Mississippi? Is the river like it says in this book?”

“Leon: You are making a poor attempt to divert my attention,” she said. “Yes, I have seen the Mississippi, and not even Mark Twain could do justice to it. It is magnificent beyond belief.”

“Now explain this, please,” she interrupted.

“Most of my boys would rather play baseball than eat. But you leave the game, to come inside and read a book that isn’t even required reading!” she said. “So, just what am I supposed to do with you?”

I tried to look even smaller and more pathetic, and slipped down a little more in my chair.

“Well, I guess you don’t have much choice,” I said slowly and sadly. “You’re going to have to keep me in from recess and make me read a book.” At that, any attempt at composure left Mrs. Platte, and she threw back her head and laughed out loud.

“OUT!” she yelled, and pointed to the door. “And you better beat me back to that diamond!”

I ran past and outside, and then slowed down. I wasn’t real worried about her catching me, not when she was laughing that hard.

But I was going to see that big river some day, I promised myself, while headed back to the playground. I knew that.

And here is the story  of my journey down the Mississippi River in a canoe!

“Hey, Dad! There’s a guy out there being dragged behind that little red boat!”

The small boy ran back from the river’s edge to where the family’s houseboat was tied. A group of picnickers were on the sandbar, and my passage brought some excitement to the pleasant Sunday afternoon. A middle-aged man in ragged cut-offs, surrounded by a brood of sunburned children in a variety of swimsuits, hurried down the bank.

It was a strange sight.  From the bank, all they could see was my foot on the gunnel of the canoe and what appeared to be a floating body in a lifejacket, drifting along behind. It was blistering hot on the Mississippi River, somewhere south of St. Paul, Minnesota.

“Hey, out there!” the man cupped his hands around his mouth so his voice would carry the 75 or so yards. “Are you all 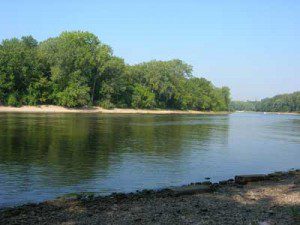 The Mississippi above St. Paul, Minn.

The man looked at the 15-foot canoe, crammed with well-used camping gear and equipped with oars. The outfit had the scrapes, dirt and grime that comes with hard traveling.

“Where’d you come from?”

“The Gulf of Mexico!”

I grabbed the canoe rope and swam side-stroke until I could wade. The canoe was pulled up on the sand, and a little boy handed me an icy Coke that lasted about four big swallows.  He gave me a gap-toothed smile and ran back to the cooler for another.

“All by yourself,” the man commented. “You know, we hear about people heading downriver all the time, but you’re the first we’ve met.”

I nodded. The line of questioning was very familiar. Modern end-to-end travelers are part of the Mississippi River folklore. Every year, a handful of adventurers/voyagers/nut cases set out on the voyage.

During my 1980 trip, I met two separate groups of canoeists trying to break the same Guinness World Record of less than 42 days and seven hours, from Lake Itasca to New Orleans.

A lockmaster at one of the dams told me of a man who tried to swim the Mississippi. He got about 800 miles before the constant soaking and river pollution and crud got to him. He looked like a leper, the story goes, before he decided to quit.

Another tale is about two Minneapolis boys who peddled their paddleboat from Minneapolis to New Orleans. The stories go on and on, and if you want to become famous or get noticed, you better find something else to do.

“So are you going for that Guinness World Record?” the man asked.

I shook my head.

“No way,” I replied. “You’d have to paddle between 65 and 80 miles per day just to be in the running, and I am not that ambitious. And besides, you wouldn’t see anything.”

“There must be some reason for all this work!” he commented.  “So, are you raising money for some charity or something?”

Fundraising was another common motivation. It seemed like there should be some underlying reason, or at least a good cause.

I shook my head.

“I’m headed south and trying to meet as many river people as I can.”

“OK, then,” the man smiled. “Bottom line. Why are you floating down the Mississippi?”

Inevitably, everybody got around to that question, and quite truthfully I wasn’t really sure, or ready to answer that question yet.

When I set out on June 7, 1980 from the headwaters at Lake Itasca, to canoe the length of the Mississippi, I didn’t know what I’d find, or really, if there was anything to look for.

My underlying goal, and stated purpose, was to do a photo-documentary of life along the Mississippi. It sounded good, and was a socially-acceptable reason for being unemployed for a while. There were other reasons too.

I was not a writer yet. All my journalism skills were raw and unpolished and I had no practical experience. I had a journalism degree from Iowa State University, with an emphasis on photojournalism, but I made my living as a grocery store clerk at Hy-Vee Food Store #1  in Ames, Iowa.

“All I know about the Mississippi is from reading,” I said. “I’d only seen the river about five times before this trip. The only reason right now, is that I’ve dreamed about floating down the Mississippi since I was a kid, and I just decided to go.”

“Just for the fun of it. So you could say some day you paddled the whole Mississippi.”

“These river rats!” he said, and hastened to add. “You know that’s not a bad thing! Shoot, I’m a river rat and I live in a suburb of St. Paul. There are river rats all over the world and the thing we have in common is that.”

He nodded toward the muddy water.

“You don’t know how envious I am,” he added. “Not many people have the courage to do what their heart tells them to.”

He looked at the canoe, then at his houseboat and the kids standing around listening. He rumpled the nearest one’s hair.

“I think I’ll stow away with this guy and go to New Orleans!” he joked. “Somebody go tell mom where I went! Now, won’t that be something!”

“Ah, hell, I probably wouldn’t go along with you, even if I could. There’s some dreams that should just stay dreams,” he said. “Someday, though, I want to do something like this trip.”

The houseboaters shared their picnic lunch, then escorted me back to the canoe. The kids waved and stood watching until I got out in the middle of the channel. The house gradually faded into the distance as I pulled steadily on the oars. I could go several miles before nightfall.

For the next chapter of “Downriver: A Mississippi River Canoe Journey” click here