Make a fishing lure from a kitchen spoon 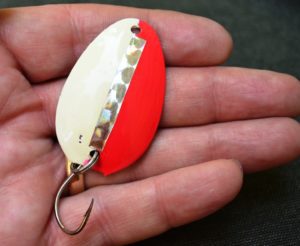 One of the most useful, and  effective fishing lures is the spoon. Here’s how to make a good one,  for pennies, from recycled materials. 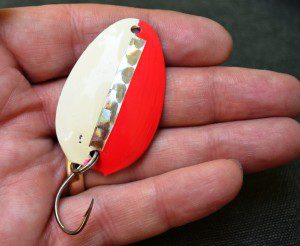 This spoon fishing lure was made from a common kitchen spoon. It works very well! (Pantenburg photo)

I started making fishing lures many years ago after balking at the price to replace those lost when fishing around rocks, trees and snags.

One the best, and most effective  fishing lures under a variety of circumstances, is the spoon. As the name implies, the spoon fishing lure is shaped like a spoon you eat with.

After a fishing trip where I lost a bunch of lures, I looked at a standard culinary spoon. With a little effort I decided I could come up with an interesting – and cheap – fishing lure.

The first commercial fishing spoon was apparently made by the Eppinger company, which has been making the Dardevle spoon since the early 20th Century. Knockoffs have probably been around for nearly as long.

The history of the Dardevle name is an interesting one…according to the Eppinger website, the first fishing spoon was originally named the “Osprey” by inventor and company founder Lou Eppinger. Toward the end of World War I, its name was changed to Dardevle in honor of the “Teufelhunden”, or “devil dogs,” a nickname given to the 4th Marine Brigade by its German foes during the Battle of Belleau Wood in 1918.

The classic Dardevle is a distinctive red-and-white striped model, and is a deadly lure for pike, muskellunge, bass and trout…in fact, most fish that eat other fish. I have used a spoon to catch all these fish, and have also used one to land perch, crappie and smallmouth bass. 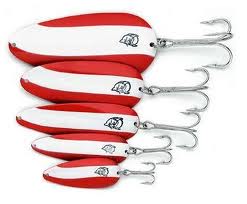 The classic red-and-white Eppinger Dardevle spoon has caught fish for generations of fishermen. You can make your own variations for pennies.

Frugal fisherman that I am, it didn’t make sense to spend upward of $5 on a lure, when I could make a pretty good substitute  with a little effort. The raw material is easy to find: Old culinary spoons of various sizes can be found at thrift stores, garage sales or any place that sells junk. The other hardware and decorative items can be bought at any sporting goods or craft store store.

Here’s how to make a spoon lure:

1- spoon. The size depends on what you want to catch, or what you found at the thrift store or garage sale.

Cut or break off the handle of the spoon (and save it for another project). Drill a small hole at either end of the remaining spoon bowl, and attach a split-ring through the holes. At the larger end, attach a hook through the ring; at the smaller end, attach the swivel, which will keep the lure action from causing line twist. Paint and/or attach reflective tape to the convex side of the lure.

I used my homemade spoons extensively on a nine-day canoe trip through the northern Minnesota Boundary Waters several years ago. On several lakes, the red and white with silver tape pattern was the number one producer on northern pike. If you are fishing the edges of weed beds, use a weedless hook with a  bucktail or streamer, and get ready for a hit!

My inherent penny-pinching cheapness – frugality, I prefer to call it – came from my dad, who grew up during the Great Depression. But, this trait is valuable in the preparedness/survival field.

Save money on things you can make, and invest the savings on items you can’t compromise on.