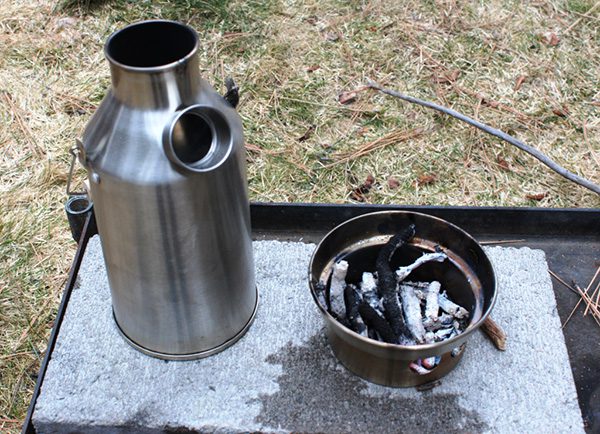 Biomass-fueled outdoor implements are the way to go, IMO, particularly if you are looking to cut weight in your backpack.

Here is a great way to cook and  boil water quickly, using sticks, twigs and other forest debris.

I was not paid to do this review. At the time of publication, Kelly Kettle is not an advertiser with SurvivalCommonSense.com.

Weight has become a prime factor in gear selection as I enter my fifth decade of  backpacking (Can I get an “Amen” from the other baby boomers out there?) If  a product is not light, efficient and compact, I won’t carry it.

That’s one reason I ordered a Kelly Kettle Trekker. I already own the larger, Base Camp model,which holds 54 ounces of water, and I was very impressed 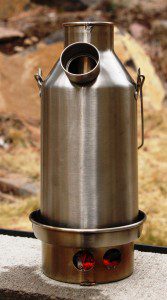 The Trekker holds 19 ounces of water and can boil it very quickly. (Pantenburg photos)

with the efficiency of it. The kettle design is extremely well thought out and practical: A double-walled metal container, hollow in the middle, fits on a base that allows building a fire. The design creates a chimney effect, which makes for effective fuel use and rapid heating.

According to the parent company, the Kelly Kettle is a 100-year-old design that originated in Ireland. The tradition of using the kettle to boil water at lunchtime goes back to the 1890s on the west coast of Ireland and the design has changed little. The idea was to produce an easy-to-use, compact biomass-fueled vessel for boiling water.

It seemed to me that such a kettle would have a valuable place in my emergency preparedness supplies, as well as being really useful for backpacking. I ordered the Kelly Base Camp Aluminum Kettle, which  holds 54 ounces of water and weighs 2.1 pounds. My reasoning was that a kettle this size, if it worked as advertised, would be ideal for base and hunting camps and could supply several people with hot water quickly during emergency situations. Most importantly, it would never run out of fuel.

The Trekker holds 19 ounces of water, which is about perfect for backpacking. I also ordered the cooking accessories, including the cooking kit. Here’s what I discovered testing the Trekker:

Boiling time: The Kelly Kettle boils water very quickly, and this can be critical if you need to help warm up a hypothermia victim. If boiling time is a major concern (for example, if you’re on a Search and Rescue team)  then get a Jetboil Sol Titanium Cooking System   IMO, a Jetboil is the most efficient stove setup available  for boiling water rapidly. A couple of my backpacking friends use them, and they can really crank the heat, quickly. But the Achilles heel with a Jetboil is the price, and the fuel. I also think that a Kelly Kettle might give a Jetboil a run for the money in a boiling race. I sense a competition coming up at the next campout…

Fuel: With most backpacking stoves, if you run out of fuel, you don’t have a working stove. As long as there are twigs, sticks, grass or some sort of biomass, a Kelly Kettle will function.

Cook kit: Another well-thought-out add-on accessory. The pot holder fits on top of any Kelly Kettle, and it uses the heat from the chimney to cook. You can start water to boiling and cook at the same time. There is also a small grill that allows using the pot directly on the base. Once your water is boiling, the chimney can be removed and you can use the coals. (Here’s a simple charcoal grill.)

Efficiency:The Trekker doesn’t use much fuel at all, and it burns very cleanly. It takes a handful of twigs to boil 19 ounces of water.  Using a Kelly Kettle reduces your carbon footprint. 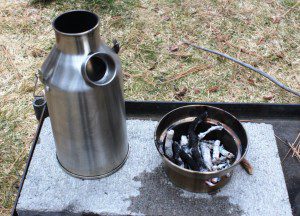 Here is a Trekker completely disassembled. With no moving parts to break or get jammed, the Kelly Kettle is extremely reliable.

Lightweight and compact: The whole Trekker setup, including pot holder and pans weighs a little over a pound. With any other non-biomass stove, you’ll  have to figure in fuel weight as part of your load. If you use canisters, you’ll have to pack out the empties.

No moving parts: My beloved Svea 123 backpacking stove went all over the country with me, and rests somewhere in the bottom of the Mississippi River below New Orleans. I had bonded with that stove, knew all its eccentricities and used it all the way down the big river on my end-to-end canoe trip.

But the Svea didn’t  work very well at high altitudes, and for three days on the John Muir Trail, it didn’t function at all. My Kelly Kettle has no parts to break, and sand, dirt and grit have no impact on it.

I like this Trekker. I will be using mine a lot!