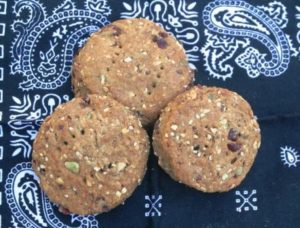 Looking for a way to use up surplus flour, or make a cheap trail food or durable survival ration? One answer may be hardtack, a baked, unleavened wheat cracker.

As a survival food, hardtack has a proven track record.

Vicksburg, MS: My gray-clad brothers-in-arms and I  hunkered down to eat. Soon, we would do battle with those “heathen Yankee horde” Civil War re-enactors at Champion Hill, between Jackson and Vicksburg,  Mississippi.

I was “under cover” on assignment for the Vicksburg Evening Post to photograph the battle, one of the biggest re-enactments of the year. Except for the Nikon safely hidden  in my haversack, my gear, weapons and accouterments were authentic in every way. 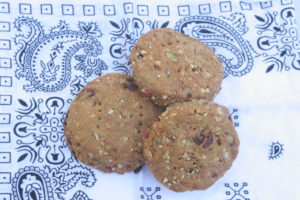 Hardtack can have different ingredients to make it more flavorable.

Since I was working for the Post, I had to represent the home team and be a Confederate. (There was is a minor earth tremor in Ruthven, Iowa, as my great-great-grandfather, James Hallowell,  92th Illinois Infantry, rolled in his grave!)

My only excuse was that I had been drafted, thought “The Cause” was illogical, had no choice about being there, and wanted to go home!

I learned a lot about being a Civil War infantryman in one short, sweltering afternoon: the food was absolutely awful; our wool uniforms were like wearing a sweatsuit; the Kepi-style caps provide no sun protection and the canteens were too small.

The Sargent, sensing my discontent (because of  my constant whining, sniveling and complaining) proclaimed to all within hearing distance that I was a “slacker” and kept an eye out so I didn’t desert. As darkness fell, many re-enactors would sleep under wool blankets, not to stay warm, but to fight off mosquitoes.

But the food was the worst. Dinner was a piece of hardtack, a fatty piece of bacon toasted on a bayonet over a campfire or cooked in a half-canteen skillet;  horrible boiled coffee brewed in a tin cup and a wormy-looking apple. After eating my meager meal, I was ready to either desert or join a raiding party to attack  the Yankees and get some real food!

Hardtack is one of the original trail and emergency foods, and it is worth considering if you are a prepper or are interested in wilderness or urban survival.

The advantage is that hardtack is easy to make, transports easily and will last a reasonably long time if stored in appropriate containers. The disadvantage is the bland taste, and traditional toughness.

Even after yeast was discovered by the Egyptians, there was a purpose for unleavened breads. It was easy to carry and durable, so it was standard fare for hunters and warriors.  Centuries later, Christopher Columbus took unleavened bread on his journeys. Hardtack remained a staple in the New World. During the early settlement of North America, the exploration of the continent, the American Revolution, and on through the American

Hardtack was a durable, if bland-tasting, field ration.

Civil War, armies were kept alive with hardtack.  A basic concept in war is that the side that keeps its soldiers from going hungry will probably win.

Hardtack is also reasonably nutritious. Wheat flour is more than 10% protein and includes Vitamin B. During emergencies, people can live for quite a while on just bread and water.  Although raw flour is hard to digest, in the form of hard bread, it is edible.

No one has determined just when or how, during the American Civil War, hard bread came to be called hardtack. Apparently,  it was first called hardtack by the Union Army of the Potomac; although the name spread to other units, it was generally referred to as hard bread by the armies of the West.

Regardless of the time frame, if you’re a history buff, prepper or hard-core survivalist, you should consider including hardtack in your emergency food supplies or survival kit. A guaranteed conversation starter at any campfire, campout or outdoor event, hardtack can have a useful place  in today’s survival kit.

(It only takes a few additional ingredients to turbocharge  the nutritional value of hardtack. To each cup of flour in the recipe, add one tablespoon of soy flour, one teaspoon of wheat germ and one teaspoon of powdered milk. There is no difference in the taste, and these ingredients combine to make the bread a complete protein.)

There are many versions and varieties of hardtack recipes: Try some of these to start out.

After cutting the squares, press a pattern of four rows of four holes into each square, using a nail or other such object. Do not punch through the dough.  The appearance you want is similar to that of a modern saltine cracker.  Turn each square over and do the same thing to the other side.

The fresh crackers are easily broken, but as they dry, they harden and assume the consistency of fired brick.

Mix liquids together.  In a separate bowl, mix dry ingredients.  Combine the mixtures, stirring to moisten throughout.  Form a ball.  On a floured surface, flatten the dough, and roll out thinly. Cut into squares and prick each cracker with the tines of a fork a couple of times.  Transfer to lightly greased baking sheets. Bake at 425° F for around 8 minutes, checking to be sure not to over-brown.  It is best served warm.

Mix: two cups of all-purpose flour and a half teaspoon of salt.  Use more salt for authenticity. Mix by hand. Add a teaspoon of shortening and a half cup of water, stirred in a little at a time to form a very stiff dough.  Beat the dough to a half inch thickness with a clean top mallet or rifle butt.  Fold the sheet of dough into six layers. Continue to beat and to fold the dough a half dozen times until it is elastic. Roll the dough out to a half-inch thickness before cutting it with a floured biscuit cutter or bayonet. Bake for about a half hour in a 325° F oven.

The basic ingredients are flour, salt and water. General directions are also similar: Dissolve the salt in water and work it into flour using your hands.  The dough should be firm and pliable but not sticky or dry. Flatten the dough onto a cookie sheet to about 1/4 inch thick, and cut into squares 3 inches by 3 inches.  Pierce each square with 16 holes about ½ inch apart.  Bake in oven until edges are brown or dough is hard.

Preheat the oven to 400° F For each cup of flour add 1 teaspoon of salt. Mix salt and flour with just enough water to bind. Bake 20-25 minutes.  The longer you bake the hardtack, the more authentic it will appear.

In a separate container, mix:

Combine the two sets of ingredients. When the dough is thoroughly mixed, roll it out on a floured board to a thickness of about a quarter inch.  Cut out circles of dough with a large drinking glass dipped in flour and put them on a lightly greased cookie sheet.  Bake about 5-1/2 minutes at 450° F.

Let the hardtack cool on a wire rack before serving with jam or jelly.