Why you need a plastic sled for big game hunting 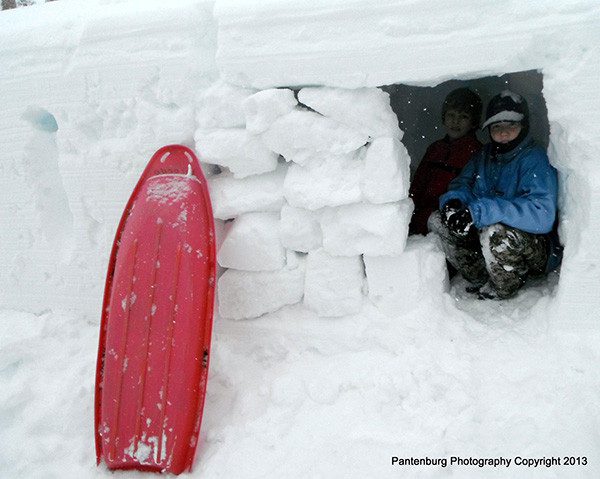 The euphoria from the successful shot starts to fade as you stand over the fallen big game animal. Reality sets in. You have a good-sized carcass that needs to be transported. You may have a long way to go, and a short time to get there. (I didn’t invent that phrase…)

The ground is muddy, and the animal just doesn’t slide. Of course, it will start to rain. You need a game sled.

That was my situation a couple of years ago. I was solo hunting on a cold, drizzly day in a Mississippi swamp and finally got a solid shot at the seven-point buck that had been avoiding me all season. He was at the edge of a muddy field when I fired, and his death run him took about 80 yards down a brushy, overgrown ravine. The buck died in a tangle of thorns and vines, and I had to gut, and remove the lower legs just to lighten the load enough to start moving it. 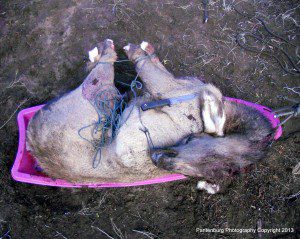 This elk calf from a desert antlerless cull hunt was transported on my kids’ plastic sled.

When I got the carcass back to the field, I cut it in half,  put it on my tarp and dragged it to the nearby woods so I could skin and quarter the carcass Getting the head and all the meat out took several hours, and wore out a tarp.

Well, all that extra work was my own fault. I had used my kids’ plastic toboggans as game sleds very satisfactorily for years and should have taken one along. But I had just moved to Mississippi, and finding one locally was impossible.

For many of us, the hunt planning stops after the successful shot. But you owe it to yourself and the animal to gut, skin and quarter it as soon as possible. That means moving quickly, and a game sled might be what you need.

Here is why a sled may be your best bet for transporting a harvested game animal.

Efficiency: I sometimes hunt in wilderness areas, and wheeled vehicles are banned. That can mean a long drag or carry to the nearest road if you score. (The family big game drag record is currently held by my brother, Mike Pantenburg, and cousin Marion Fitzgerald. Mike killed a whitetail buck over three miles from a road and the drag, with Marion and Mike pulling, took well over an hour and wore away much of the hide. I trailed along behind, carrying three rifles and two daypacks.) A sled could have been pulled much easier, and would have kept the meat much cleaner.

A quarter of an elk can weigh upward of 150 to 200 pounds. I can’t carry a quarter on my shoulders very far, but I can drag one on a slider.

A few years back, my hunting party hauled out a small cow elk in the desert on my kids’ purple toboggan. We gutted the animal, took the legs off at the knees and tied the complete elk onto the toboggan. Then, using bowline knots and paracord, we rigged up a fan-shaped harness similar to those used on dogs sleds. Even though there was no snow on the sand, three hunters pulled the elk to the road with little effort. 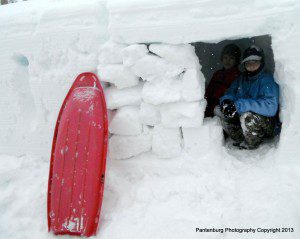 This toboggan was instrumental in quickly making this snow cave. It allowed for easy removal of snow blocks.

In other instances, you can quarter the animal, place the meat in plastic or cloth bags to keep it clean, and lash it to the toboggan.  There’s no glide on bare dirt, but you will really appreciate any downhills! If there is snow on the ground, a sled is a no-brainer.

Moving gear: Snow camping requires a lot of gear, and if you’re hunting in deep snow, you better be prepared for an unexpected night out. If you’re on snowshoes or cross-county skis, a heavy backpack can unbalance you. It can also push you downhill a lot faster than you may like.

A standard approach to either sort of touring is to have ropes on each end of a toboggan. On the flats or uphill, the person in front breaks the trail and does the hauling work. On downhills, the back person controls the descent. Obviously, breaking trail and dragging is going to be where the stronger person needs to be.

Building igloos or emergency snow shelters can be strenuous, especially if you have to haul snow blocks any distance. You can drag several on a toboggan. Also, if you’re removing blocks from inside a snow cave, put them on the toboggan, and have your partner drag them outside. This keeps heavy lifting to a minimum and speeds up the task. 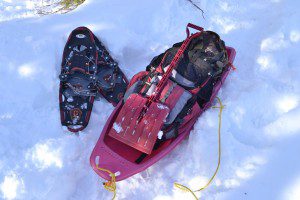 I can haul a Ten Essentials pack and a backpack easily on my toboggan.

As a bug out tool: Sadly, there are some obese, out-of-shape preppers, who love to discuss the best storage foods, best survival knife or the best firearms  to own during a disaster situation. They may ignore a fundamental fact: If you can’t carry your bug-out bag, your stuff will be worthless to you. Instead of getting in shape, these folks keep accumulating gear, and ignore the reality of  moving it

Or, what if you’re a seasoned citizen, and have to leave an area? Or a survival mom  with small children?

Carrying a 50-pound pack  is hard work. But dragging twice that weight on a small toboggan in the snow is comparatively easy. In many cases, it will be a lot easier to haul toddlers on a sled than to carry them. And if you need to assist a disabled or elderly person, a sled may also be an option.

If you’re a big game hunter, consider how you will remove the animal after the successful shot. If you are a preparedness type, give some thought to moving gear during a disaster. In either case, you might find that a sled is just what you need.