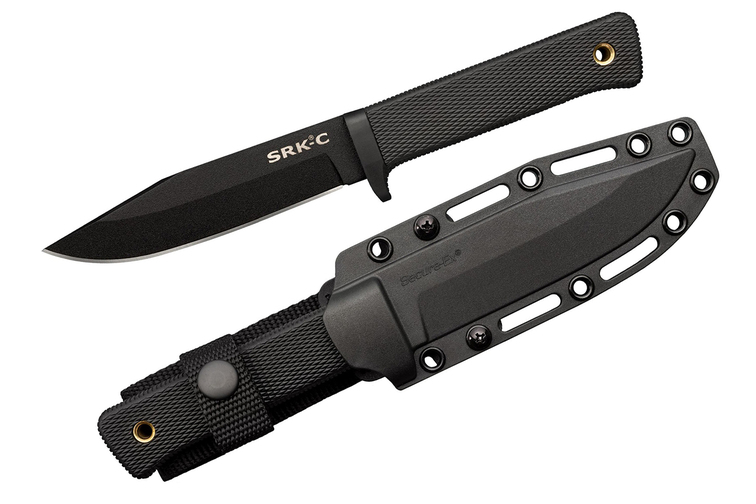 The Cold Steel SRK was my knife of choice for many years.

But the Cold Steel compact may prove to be even better.

Disclaimer: I bought this knife to use. Nobody had any input in this review, and all I ever promise on any gear review is a fair shake.

I bought a Cold Steel SRK in 1991 upon moving to Idaho. My intention was to hunt elk and deer in the mountains and desert every year and I did. Moving from the east coast, my deer hunting knife had been a Buck model 317 folder. 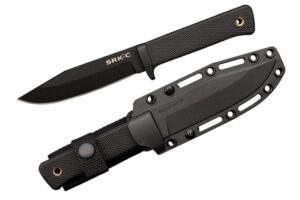 The SRK Compact is an improved version of an old standby.

But folders have a big weakness – the hinge. Break that and you end up with two pieces and no survival tool. In the terrain I was hunting, tool failure is not an option.

So I bought an affordable knife that would do the job – a Cold Steel SRK. Immediately, I had the blade coating removed, and the edge re-ground to convex. The knife served me well for some 20 years before it was honorably retired. During its time as my only hunting/survival knife, the SRK was carried for hundreds of backcountry miles, field dressed dozens of deer and did everything required of a hard use knife. It was a favorite in the backcountry and around the skinning rack and was loaned out a lot. Two of my elk hunter buddies bought SRKs after using mine.

But I always thought the SRK could be improved. (Cutlery fanatics cannot quit tinkering!) The SRK  blade is six inches long and 3/16-inch thick. Hard use made me decide the SRK could be made more effective.

The Cold Steel 49LCKD SRK Compact SK-5 integrates improvements I would have (if asked!) suggested.

Here are the Compact’s  specs:

Here is how the knife has worked out so far:

Deer season is over, so I can’t do a real hunting field test. But spring means I’ll be back out on the Mississippi River with Quapaw Canoe Company, and the knife will be used for some bushcrafting work. It whittles nicely, and feels good in my hand. Turkey hunting season starts soon, and the Compact might go along. 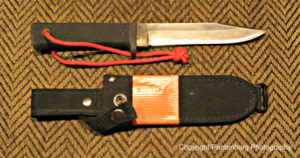 My old SRK served me well for 20 years, and is now in honored retirement.

Blade length: My favorite user/hunting/bushcraft length is somewhere between four and five inches, depending on the knife’s overall design. The SRK has a six-inch blade, and that was not ideal for my purposes . I always thought a shorter blade, say five inches, would be more handy and efficient. The Compact hits the sweet spot.

Blade thickness: The blade on my SRK is too thick at .187 inch. During the 20 years I carried and used it, there was never a time when a thick blade was ever needed. I prefer a thin blade – say under 1/8-inch for everything I do outdoors.

Steel: This is my first experience with SK-5. Sk5 is a Japanese high-range Carbon steel. After quenching and tempering, SK-5 steel has high hardness and wear resistance. So far, I like it – the steel holds an edge well, and is not hard to sharpen. It is not stainless.

Point: A clip point is one of my favorites, and it is a good choice for a do-it-all blade. There is a swedge on the clip. Other good point choices include drop and spear point.

Grind: The flat grind with micro bevel works well. My favorite grind is convex. My old SRK  was reground to convex as soon as I got it, and I’ve never regretted that alteration. Over time, with stropping, the grind will eventually evolve into convex.

Handle: The Kray-Ex appears to be the same as that of the SRK. The diameter is about right for my glove-size large hands

Sheath: This is not a traditional knife, so a leather sheath would probably look kinda weird. The Compact has a super sturdy Secure-Ex sheath that is comfortable to wear on your belt. I can get into my truck with it on and fasten the seat belt.

Coating: I don’t like blade coatings. For the most part, I see them as unnecessary, and the coating interferes with smooth slicing. The coating also makes it harder to locate if the knife gets dropped in leaves in the dark. A coating might be a good idea in a hot, humid environment to prevent rust. But I live in Mississippi, and have never had a problem with knives rusting. Any knife will rust if it is neglected.

Handle: Personal preference here (Is there any other kind?) I would prefer the handle diameter to be about 1/4-inch thicker, but I realize makers have to cater to the largest demographic. The handle design is long enough for all of us to use.

Cost of the Compact SRK  is about $50 with shipping. This is a steal for a solid, useful survival/hunting knife you can depend upon.