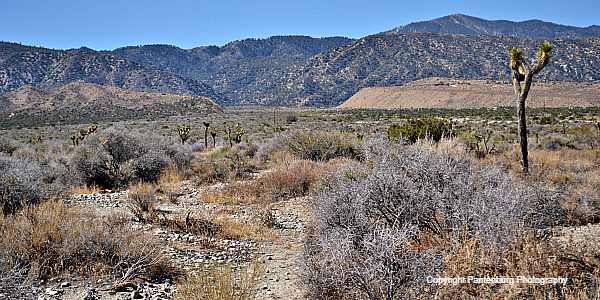 More people die of drowning in the desert than of thirst, according to the United States Geological Survey. In the wilderness, and in particular desert areas, flash flooding can be a real, immediate and deadly danger.

by Leon Pantenburg
Death Valley, California, December, 1977:  The rain pattering on the tarp woke us up and my backpacking partner, John Nerness, groaned for a moment, then started to laugh.

“I don’t believe this,” was his comment. “I just don’t believe it! It rains less than two inches a year here, so it decides to do it now!”

The hilarity – and seriousness – of the situation wasn’t lost on us. We were camped in a ravine in the desert backcounty and had been backpacking for two days. We immediately got up,  packed up the tarp and the rest of the camp and headed for higher ground.

A much younger Leon in Death Valley, 1977. We camped in this “forest” and later moved when it started to rain. Flash flooding can be a concern in many areas. (John Nerness photo)

There was no flash flood in our  area, but we could see lightning off in the distance. The weather and rainfall several miles away could have affected us, even in one of the most arid places in the United States!

A flash flood is a rapid flooding of geomorphic low-lying areas – washes, rivers,  dry lakes and basins, according to the National Weather Service. It may be caused by heavy rain associated with a storm  or melt water from ice or snow flowing over ice sheets or snowfields.

Flash floods can also occur after the collapse of a natural ice or debris dam or a human structure such as a man-made dam. A flash flood differs from a regular flood, according to the NWS,  by a timescale of  less than six hours.

Flash flooding has been in the news lately, particularly in Southern California.

In the wilderness, and in particular desert areas, flash flooding can be a real and immediate danger. In the desert, a rain storm several miles away could cause a buildup of  rainwater that gathers and sweeps down a ravine or valley with the same speed, and more power, than a herd of stampeding horses. 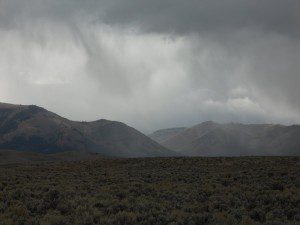 There is little vegetation in desert areas to absorb heavy rainfall, which leads to flash flooding.

Desert sand doesn’t soak up water quickly, so heavy rains can produce flood conditions very quickly and without warning. Dry channels, ditches and lake beds will fill quickly and the water can be strong and violent – sometimes creating a wall of water 10 to 30 feet high. (Click here to see a flash flood in the Sahara Desert!)

Because of the threat of a flash flood, you should never rest or sleep in ditches or dry creeks – even if it doesn’t look like rain.

In the event of a flash flood, get to higher ground as fast as you can and avoid standing near rocks or trees. It’s best to get 30 to 40 feet higher than the nearest low point. If you’re in a vehicle, pull over and put on your hazard lights until the rain has passed. If the rain continues and rises up the vehicle, abandon it and move to high ground on foot. These desert storms and floods are rough, but usually short-lived.

Your best bet for surviving a flash flood is to keep an eye out and anticipate its arrival. Most people who die in these floods, according to the USGS,  are caught off guard. Pay attention to weather reports and be alert for thunder and lightening in your area. If you suspect a storm is coming, get to high ground and wait it out.

This dry stream bed could be full of water in a matter of minutes.

Here is some flash flood advice for drivers from the Federal Emergency Management Agency:

SURVIVAL COOKING IN A DISASTER SITUATION

I recently wrote a popular article and published a video about the Rocket Stove cooking method. It’s a way to use refuse from the disaster zone to build a stove, and fuel that’s locally found to start cooking immediately after a catastrophic event. That’s a good solution for a homestead or community that has been completely devastated.

Assuming your house and pantry are somewhat intact and you have safe access to your belongings, you can use this method to cook for your family and the community for a long time while rebuilding takes place.