Pipe tomahawk provides touchstone with past 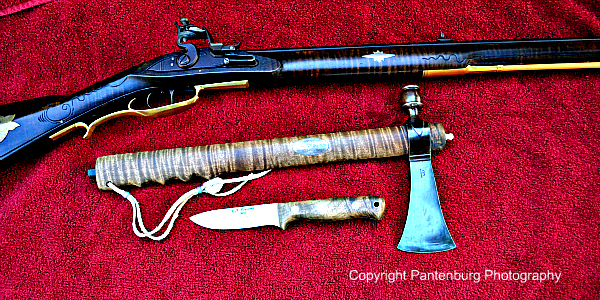 One of my readers wrote, “Loved the story about the flintlock rifle. When are you going to tell us about that pipe tomahawk that goes with it?” So, here it is, folks – a good tale about a man who loved to make a well crafted tool and weapon, and gracious enough to give it away.

My friend, Charles Crowther, handcrafted my flintlock rifle, which I named ‘Annabelle’, and that story was published in “The Backwoodsman” magazine a few months back. A few readers asked about the pipe tomahawk I carry with it that was pictured with the article. I love to tell this story around a roaring campfire with good friends, but I’ll also share it through my blog as well.

A couple hundred years ago, these tools of the trade would have been required for any frontiersman to survive a typical week. Today, nobody really needs a custom flintlock long rifle, with matching pipe tomahawk and handmade knife to harvest a few squirrels every now and then. 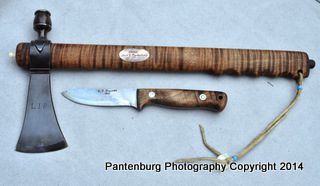 My custom pipe tomahawk was made to my specifications by the late Jim Grenfell. The knife was hand made out of a sawmill blade by C.T. Fischer, of Elk City, Idaho.

But there’s a difference between wants and needs, and in some areas of my life, these two areas are not well defined. I always wanted a custom flintlock hunting rifle, and the tomahawk and knife that went it. But all those would have to be handmade by a fine craftsman and that was way out of my budget.  However, such is life and inexplicably, things can manifest your wants or needs while also providing great pleasure. This is a story like that.

But first, there’s a bit of  background on tomahawks.

Tomahawks were survival tools along the American frontier for almost 200 years. Virtually every settler, mountain man and long hunter carried a flintlock rifle, a tomahawk and a long knife.

These were the basic tools needed to stay alive in a frequently hostile environment. The tomahawk was used as a chopping tool as well as a weapon. It and long knife were used for fighting after the single shot from the flintlock was fired. In wet weather, the flintlock might not fire at all (Hence the terms “Keep your powder dry” and “Flash in the pan.”)

As in everything, there were different patterns, blade styles and handle variations. Used to be, after a rifle stock was cut out of a blank, there would be enough wood left for a tomahawk haft and knife handles. Having a matching set was the rage along the frontier.

The most ornate design was the pipe tomahawk.

And there were other symbolic uses for the tomahawk, according to KHS.  For example, to “Bury the tomahawk (hatchet)” meant a tomahawk was ceremonially buried and it signified the end of hostilities between two groups. Pipe tomahawks were exchanged between chiefs of different tribes to signify peace, and owning one was a mark of prestige. Lewis and Clark took 50 pipe tomahawks with them on their expedition, the Corps of Discovery, to trade or present as gifts. This use as gifts and fashion accessories led to pipe tomahawks becoming more decorative than practical.

The Gift of a Custom Pipe Tomahawk

While involved in a Boy Scout flint and steel fire making project, a mutual friend introduced me to the late Jim Grenfell. I needed cheap steel strikers, and Jim, a retired UCLA dental instructor, had taken up blacksmithing when he retired.  Jim made custom metalwork items and knives and loved working with kids. He jumped into the flint and steel project with both feet, and made hundreds of strikers to give away to the Scouts before he passed away in 2008.

Jim was also a history buff, with a special interest in the Vikings and the Colonial frontier era. He made for me a Viking inspired striker with a unique and ancient looking Scandinavian design, and I carry Jim’s striker in my flint and steel kit. It’s been used to start thousands of fires, and is the standard for testing “sparkiness” in rocks. During the course of our friendship and Scout excursions, I shared with him the story of ‘Annabelle’, the flintlock rifle. Being a craftsman himself, he was very impressed with all aspects of the wood and metal work performed by Charles. 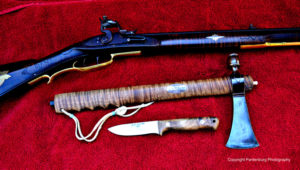 My flintlock rifle, tomahawk and handmade knife are similar to what frontiersmen carried during the Colonial era.

Jim was always looking for historic metal working projects. He once made D handle Adze for a person who wanted to use it to make a dugout canoe and was a skilled knife maker. Together, we designed a hollow handle survival knife. (He did all the work, and I told him what I thought would work well.)

With an idea in mind, Jim decided ‘Annabelle’ needed a proper tomahawk and took up the challenge. The resulting pipe tomahawk is primarily decorative, and Jim took his time finishing it to my specs. The head is made of high carbon steel that Jim forged into a blade shape and finished by hand. The handle is curly maple. While it doesn’t quite match the rifle stock, it will do and I’ve considered working to darken the grain a bit. Jim carved the wood into a special grip to custom fit my hand.  He put a silver inlay on both sides, one mentioning the maker, and the other naming the owner and the year it was made. There is a blue trade bead on the leather  lanyard.

I really enjoy carrying the tomahawk when I’m hunting squirrels or deer with the flintlock. I have chopped wood and the heads off squirrels with it, but no way am I going to use it for serious wood splitting or hacking. I have other hatchets designed just for those purposes.

The pipe has never been smoked, and that is also not in the plan. But I don’t entirely dismiss the idea. I have several Native American friends that, upon their passing,  I would honor with tobacco and that pipe. The honor ceremony varies among tribes. My friends are Omahas, who live on the reservation at Macy, Nebraska. Their ceremony involves prayers and songs, and the pipe is lighted and offered to the four directions of the sun.  The pipe may someday be used that way.

The pipe tomahawk has two silver inlays, and a blue trade bead on the lanyard.

But what the tomahawk primarily does for me is to provide a touchstone with another time, and connection with two dear friends that are no longer with us. Here’s how it feels to me.

I’m hunting in a deciduous oak and hickory forest in Mississippi. I’m carrying my flintlock rifle, powder horn and shot bag, and my tomahawk is behind my hip on my left side, tucked into a sash, with a handmade knife next to it.

It’s just after dawn, and there’s almost enough light to shoot. The dew on the leaf duff keeps the leaves from being too noisy, and the air smells fresh, but musty and primordial from layers of rich composted soils.  In this case, slower is better. I’m easing through the leaves, and hear a hickory nut hit the ground up ahead. I slow down even more, hoping to catch sight of the squirrel. I make out the silhouette, and see the head slightly moving around to look for predators. I rest the long barrel of the rifle against a sapling, and click the flintlock to full cock. I line the sights up on the head.

And that’s all I need. Actually killing a squirrel is a small part of the whole experience. And hunting is what I have just done. For an instant, I am a hunter from the 1700s and harvesting dinner will depend on how straight I shoot. It feels like I went back in time, and it was a great visit. I’m thankful to have had the tools that allowed it and the friendships I fostered in their making.