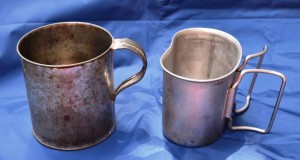 Survival gear doesn’t need to be elaborate or expensive. Some of the best items are common, easily-found products you may already have.

One of those items is a large metal cup. Here’s why you need one.

I slogged along in the ranks, Springfield slung over my shoulder, headed toward the sound of the guns. I considered deserting or straggling, and had about made up my mind to turn and run when the shooting started. It was my intention to portray that unheralded, under-represented group of shirkers, cowards and  malingerers that made up a sizable percentage of both armies. As an embedded journalist in the Confederate infantry, I had been conscripted to cover the battle of Champion Hill Civil War re-enactment between Vicksburg and Jackson, Mississippi. 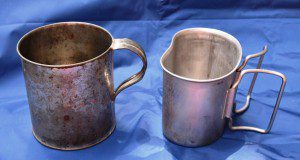 The Civil War replica, left, and the more contemporary military canteen cup have many uses in a survival kit. (Pantenburg photos)

Except for the Nikon and ballpoint pen hidden in my haversack, all my accouterments and weapons were authentic. It didn’t take long to form opinions.

The  heavy wool uniform was like wearing a sweatsuit. The small kepi offered virtually no protection from the sun. The canteen was too small, the leather shoe soles were slippery and the authentic food really sucked.

But several common items proved invaluable. My cotton bandanna was soaked in water and worn around my neck to cool and protect it from the fierce sun.  A flint and steel kit could stand up to the hard marching and campaigning, where as matches didn’t last in the heat and humidity. Hardtack was durable, but tasteless. 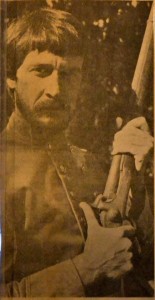 But the quart tin cup was a stellar performer. It  served as my mess kit, and worked really well for boiling coffee and heating rations over a campfire. Water stations were set up all over, and we’d stop frequently to hydrate, replenish canteens and pour water over our heads. But the most appreciated use came as we were marching back after the battle.

A sutler set up along the line of march, and would fill any cup with cold beer for a dollar. He would take an IOU, and he did a land office business.

I’ve included a tin cup in my gear for many years.  When I hiked the John Muir Trail in 1976, I carried a metal Sierra cup on my belt. At every running stream, I’d use the cup to get a drink. I also mixed instant oatmeal in it, and used it for just about everything. 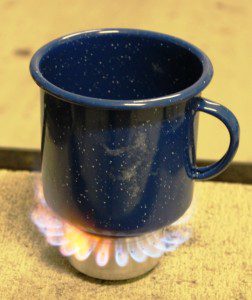 The stove and enamel cup work efficiently to boil water.

That was my first wilderness trip where a tin cup proved its worth. Give some thought to adding one to your survival gear.

Here’s what I have used a metal cup for:

The cup can also be handy for dipping water out of  suspicious source before purifying. In a pinch, you could also dig with it, but I wouldn’t waste my time digging a hole to make a solar still!

The tin or enamelware cups are cheap and can be found anywhere. Include one  in your survival gear and you’ll be surprised how useful it is!