How to make medicinal mullein tea 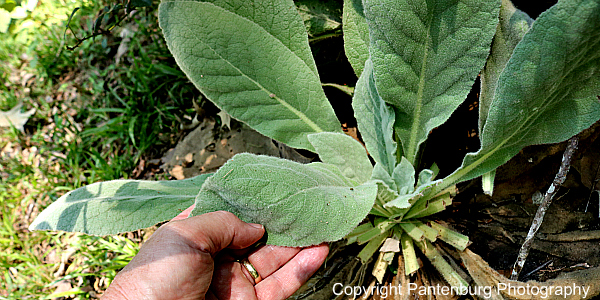 A weed is a misplaced plant.

And some of those weeds have medicinal properties that can be very useful. Mullein is one of those useful weeds you should consider finding and using.

Disclaimer: Don’t use any wild plants for anything unless you can positively identify it. If you have any  food allergies or other health issues consult your doctor before trying mullein tea.

One of the most useful medicinal plants is mullein, and a supply may be as close as the nearest weedy, vacant lot. 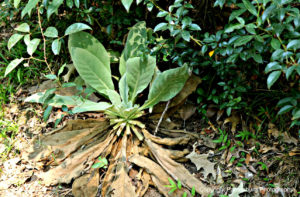 I found this small mullein plant along side a weedy country road. Mullein grows in open areas, in disturbed, poor soil that doesn’t get a lot of water.

I was out looking for a new supply last weekend in south Warren County, Mississippi,  and found a plant near a road. I knew it hadn’t been sprayed, so I gathered a new supply. The mullein was free, and picking enough to last for a while took about five minutes.

I started drinking mullein tea upon recommendation of an herbalist. Decades of playing stringed instruments left me with an arthritic left thumb joint, and prolonged jam sessions would leave me with an aching left hand. After an hour or so of intense, inspired fiddlin’, my hand would get sore. That’s a terrible thing to happen an hour into a square dance!

Reasoning there was nothing to lose, I brewed up some mullein tea, and started drinking it. My thumb started feeling better within a couple of days, and it feels great now. I am sold on the concept.

Mullein tea is not a new discovery. Native tribes used mullein leaf tea for treating inflammation, colds and rheumatism. It was considered to be anti-inflammatory, antispasmodic, analgesic and expectorant. Its demulcent and astringent properties were found to be useful in treating diarrhea. The root was dried and made into teething charms for infants and children.

Mullein was apparently a go-to herb, being used to prepare sweet tea for coughs and persistent swelling of larynx. Poultices made of mullein leaves were applied externally to sprains, bruises, and rheumatic pains to reduce swelling and relieve pain.

Finding mullein is generally pretty easy. The plant needs open ground and can be found growing in fields, waste places, disturbed areas, railway embankments and similar dry sunny localities. Don’t take mullein from areas that have been sprayed with herbicide or pesticide. The residual substances could make you very sick.

The mature plant will have a tall stalk with yellow flowers on it. The ID giveaway is the soft, green leaves. They have a fuzzy feeling, and serve as a great substitute for toilet paper in the backcountry.

How to use mullein:

Preparing the tea is simple. Wash the leaves and/or flowers, place them in boiling water and let them steep. 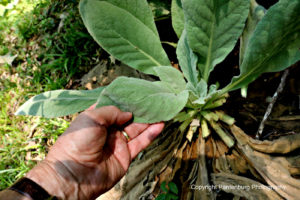 The tiny, soft hairs on the leaves may irritate your throat, so make sure to strain the tea after boiling.

Straight mullein tea tastes like boiled weeds, and IMO, is bitter, and not enjoyable to drink. I use about a teaspoon of maple syrup with a 12-0unce glass of tea, and that takes the bitter edge off.  I make large batches, mix it about 60/40 with green tea and honey to taste and refrigerate it  (Mississippians drink lots of iced tea during the long summer months.) One of my fellow tea imbibers mixes his mullein brew with Crystal Lite™ soft drink mix.

If you just want one cup, pour a cup of boiling water over the dried mullein flowers and/or leaves and let it  steep for 10 – 15 minutes. Strain the the liquid through a cheesecloth or a coffee filter to remove the plant’s tiny hairs, as they may irritate the throat.

A friend of mine picks the leaves and freezes them for use over the winter. The leaves and flowers can be dried, and used like other herbal teas. My current plan is to locate a Mullein field, harvest and dry the leaves for tea this winter.

Mullein tea, either as a medicinal or beverage drink is a good choice for healthy drinking. Again, DON’T use any plant unless you can positively identify it!!! Get a good plant ID book, and carry it with you on your quest for mullein. Here is a good edible plant publication for the eastern United States, and if you live out west, you need this plant book. (These books should be in your survival cache anyway!)

Here are some other health benefits of mullein tea.

Feedback from Jeaneene Nooney:  I read about mullein’s benefits last summer, and reasoned that with covid around, it wouldn’t be a bad idea to collect some leaves for use in the cold Michigan months. I contracted COVID in late December, however, I forgot where I had stored the herb!. So my husband (who also had it) and I didn’t start using the mullein tea until a week or more into the onset of the virus. About halfway through a cup of the tea, I said, I think this is helping! To my surprise, my husband agreed. We have used it about 3 or 4 times a day since then, with pretty darned good results. It eases the discomfort in the chest and also seems to release the congestion in the nasal area. I’m sold on it!

By the way, mullein was used in Europe and brought here by the colonists as a medicinal herb. The natives latched onto it from them. The plant, previously unknown in North America, spread across the nation. Thanks for your informative article.