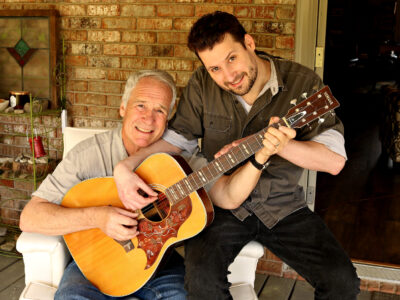 Some apparently mundane items may become the launching point for greater things later on. Or the little things might end up being a big thing.

Like the Yamaha guitar I bought some 50 years ago. It opened the world of music to me.

I had no business buying a guitar. In the early 1970s, I was an impoverished college student, perpetually broke, making $1.70 an hour sacking groceries at the Hy-Vee Food Store. A full-time student at Iowa State University, I was nearly a full-time store employee. 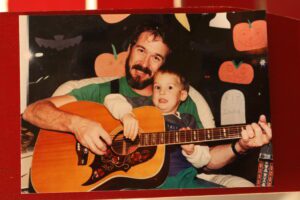 BOISE, IDAHO: My son Dan, about two years old in this photo, grew up with music.

If I pinched pennies during the school year, and worked a couple jobs in the summer, I could scrape up enough money to stay in school. It was a struggle every quarter to come up with enough cash for tuition, room and board and books.

But I had to have a guitar. I was wild to learn how to play anything with strings, and didn’t get my great-grandfather’s violin for several more years.

Eschbach Music House was a regular stop whenever I was in downtown Ames, Iowa, where I ogled the expensive guitars and tried them out. My dream was to own a Martin D-28 and to play in a bluegrass band.

One day, the owner mentioned that the store had an installment program for buying instruments.  And yes, they would sell a guitar to a teenager like me with no real employment record or credit history.

Immediately, I looked at the Martin D-28 on the wall. It cost $565, an impossible sum for me. But there was a new Yamaha FG-300 that looked and sounded really, really good. I signed on the line and bought that Yamaha for $235. A hardshell case for it was financed for another $50.

I went home and played the Yamaha until my fingers hurt. This went on day after day.

Over the years, the Yamaha has provided a lot of enjoyment for me, and hopefully some of the people who heard it. It was played at 17 weddings over the next few years. The Yamaha was loaned to fellow musicians and the sheet music to “Wedding Song” had a permanent place in the case. The Yamaha was played at several of my six sisters’ weddings. 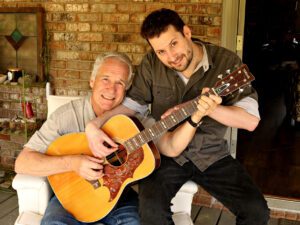 We recreated the original picture as best we could. Today, Dan, 32, is a professional musician.

My sister Carmen Rall sang and I accompanied her on the Yamaha at the famous “Little Brown Church in the Vale” at Nashua, Iowa at the wedding of Ken and Linda Sills. In 1975, my dream of playing in a Bluegrass band was realized when I became a member of “The High Plainsmen.” Based in Ames, the band was as much fun as I’d imagined it would be.

I’ve always been in some sort of a band over the years and the Yamaha was a working stage instrument. It has been re-fretted twice (the bottom five frets). No matter the weather or temperature variances, the guitar stayed in tune and sounded good.

After graduation from ISU, I did a hitch in Volunteers In Service To America in Macy, Nebraska on the Omaha Indian Reservation. The res was kinda dull during the winter months, so several of us formed a band called “Prairie Grass”  and the Yamaha continued its service.

Later, the Yamaha was an integral part of an Irish/historic music re-enactment band called “Irish Blend. The band played in the Central Mississippi area and we recorded two albums: Southwinds and Songs of the Vicksburg Siege. The Siege album did very well and was sold through the National Park Service. It was also for sale at the Smithsonian Institute gift shop.

Fast forward several years. The School of Rock hit the theaters and it seemed like every kid wanted to play in a band. My kids were no exception. I bought two entry level electric guitars and amps for Dan and Jimmy, my middle son. They both practiced incessantly.

All my kids went to Westside Village Magnet School in Bend, Oregon, a kindergarten through middle school experience. One day, Wendy Winschel, the principal and a good family friend contacted me.

“The kids want to form a rock band, and Jimmy volunteered you to help,” Wendy was laughing. “You don’t have to do it, but I bet the band will be a lot of fun.”

It really was. The old Yamaha went to school twice a week and it was used to teach basic guitar lessons.  Along with teacher Cliff Williams, we scrounged instruments, recruited volunteers and put together a rock band. The kids decided on the music, and to my surprise, selected classic rock standards. On the last day of school, the band performed to an enthusiastic crowd of students and parents. By  the end of that school year, I had put in 200+ hours of volunteer time and loved every minute of it. As far as I know, the band continues at the school.

Music continued outside of school. At one point, there were two bands operating out of our house. Jimmy played with “The Chocolate Chips”, a trio that included Evaughn Furgurson and Max Haldeman. They had a lot of fun performing.

Dan became a professional musician. His band “The Autonomics” toured widely in the states and did five European tours before 2020 and COVID shut down the music and club scene. The band has also produced several albums. Revolver is my favorite song Dan wrote. People assume it’s about me :-).

My daughter Mary sings and  knows her way around the fretboard of a ukulele and a guitar. She’s been a graduate student at The Middlebury Institute of International Studies at Monterey, California, for the past couple years and her music has had to take a back seat. 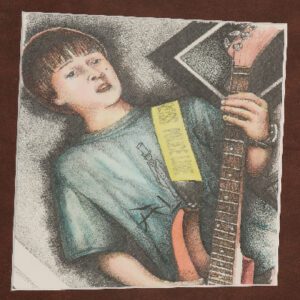 Jimmy is playing in some incredible, over-the-top, divine heavenly band. He didn’t survive brain cancer. He is greatly missed. Every day.

Strings: Early on, I settled on Darco New Yorkers medium gauge strings. This last time, Martin light gauge strings were put on it because I couldn’t find any Darcos. It doesn’t sound as good, Dan commented, and I will look harder.

Strap: The strap deserves mention. It was given to me by an old friend and fellow picker, Theda Shirley.  An accomplished singer/songwriter/musician, Theda was the wife of the late Comer “Moon” Mullins. Moon was a legendary guitar player, well-known in the Bluegrass and old time music circles.

After Moon died, Theda gave me Moon’s banjo and the strap he used on his guitar. Theda wanted those things to be used, and they are.

Music is one of those activities that gets sometimes overlooked in school curriculum. But music,  IMHO, either vocal or instrumental should be in every school and available to every student. And every kid should have a ukulele.  Want proof?

Anyway, my life has been greatly enriched by making music.  It was never in my plan to pursue a professional musical career, but there is a lot of be learned performing in front of a crowd. Or in practicing with a group to produce a song. Delayed gratification and patience can be learned. Self-confidence, and the ability to think on your feet are other life skills music can teach. Besides, playing is just plain fun.

My whole family, and probably some others, were impacted because of the guitar I bought back then. That Yamaha is one of the best investments I ever made.

Eschbach Music House on 302 Main Street, Ames, Iowa, sold me my first guitar in the early 70s. The company was always very encouraging to young and beginner musicians. They were at this site for decades. 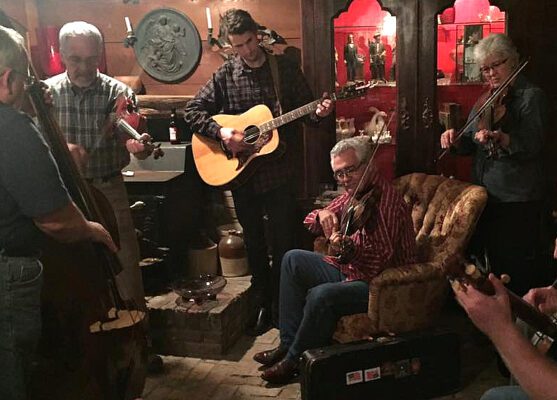 Bucket list – CHECK. A pickin’ at Gordon Cotton’s house in Campbell Swamp, MS in 2016 on the occasion of his 80th birthday party.  We didn’t set this photo up. Decades ago, my usual spot at pickin’s was where Dan is standing. I’ve played that guitar there many, many times. 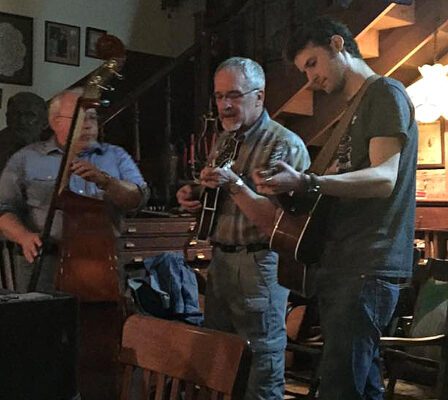 Another dream come true: Playing at a Campbell Swamp pickin’ with my dear friend (and former band mate) Michael McGrady and my son Dan. Dan was unfamiliar with the music form, but he and the old Yamaha did just fine. 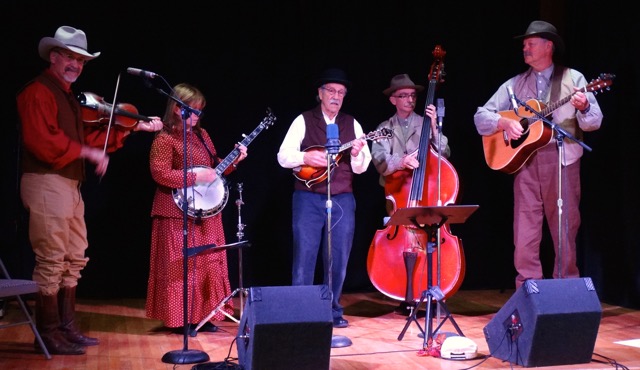 The Thorn Hollow String Band plays old time music at the High Desert Museum in Bend, Oregon. I played with this volunteer band for five years and had transferred to fiddle by this point. From left: me, Elaine Berry,  Bob Foster, Steve Knapp and Skip Paznokis. 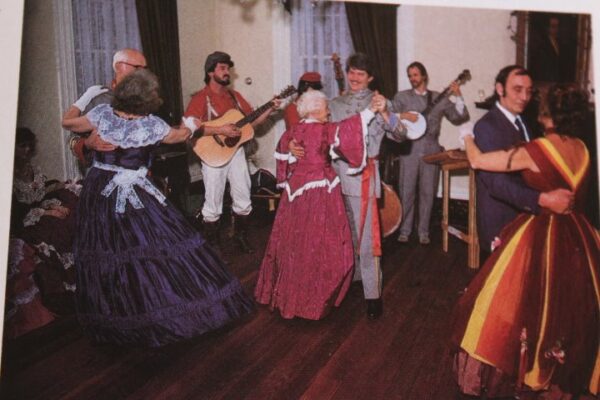 This photo appeared in the 1982 Christmas  edition of “Southern Living” magazine. I was playing a Martin guitar at the Balfour House ball in Vicksburg, MS. Hollis Landrum is on banjo, and Robert May’s hat and bass neck are behind the dancers. 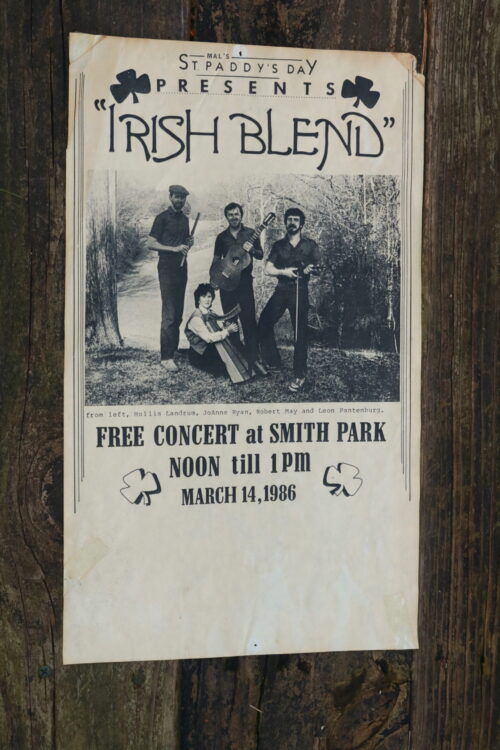 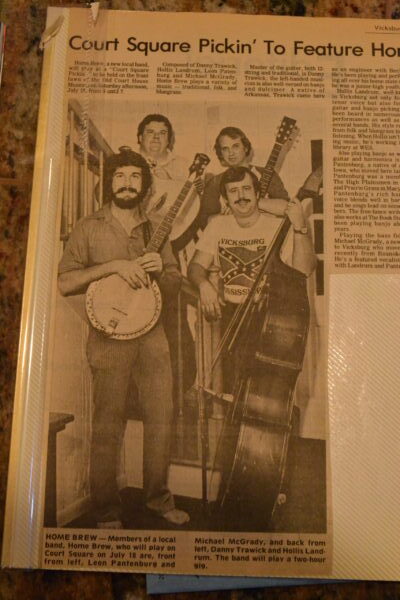 This band “Home Brew”was formed to play a fundraiser at the Old Court House Museum in Vicksburg, Ms. The band, back row from left: Danny Traywick and Hollis Landrum. Front from left: me and Michael McGrady.