Try these effective methods to carry water in your survival kit 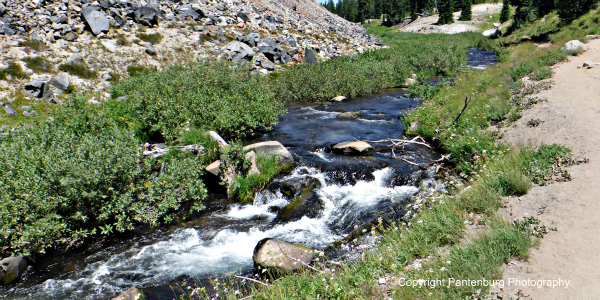 Being able to carry sufficient water is a survival must.

Dehydration can cause you to collapse in the heat or in the cold, and it can kill you. Every survival kit should have some way to carry and purify water. Here is what you need.

The rattle of musketry came from over the hill, and in a few minutes, our pickets were driven back. The order came to form ranks, so I drained my canteen and wished for more water. It was late in the afternoon of the Civil War re-enactment battle of Champion Hill, near Vicksburg, MS. I was an “embedded” journalist in the Confederate Army, covering the event for the Vicksburg Evening Post. 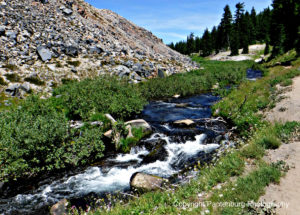 This water may be pure, but it’s best to filter it anyway.

All my clothing and gear was authentic, right down to the small, standard issue, flannel-covered canteen. It held less than a quart, and even though we replenished our canteens whenever possible, the hot Mississippi sun and wool uniforms sucked the moisture right out of us.

We had skirmished off and on all afternoon, and my lips and mouth were dry from biting off the ends of the blackpowder cartridges to load my Springfield. We raised the Rebel yell and waited to fire a volley when the Yankees got closer.

In the early 1970s, I never filtered drinking water in the mountains. I’d carry a filled quart military canteen as insurance, but I never passed a clear-running stream without taking out my Sierra cup and sampling. 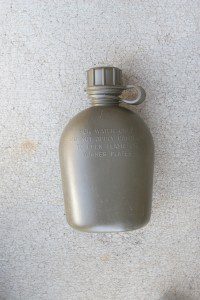 This quart military surplus canteen is cheap and rugged.

I hiked the John Muir Trail; through Yellowstone, and various other western mountain ranges without ever purifying water and I never got sick. But I’d never do that today. I always carry water on outings, and some way of purifying it.

As you put together a survival kit or update your equipment, here are some effective ways to carry water worth considering.

Collapsible water containers: I use these a lot, particularly in the quart size. On a 1977 desert backpack in Death Valley, my hiking partner John Nerness and I each carried five-gallon collapsibles  inside our backpacks. Each of us carried three gallons of water in them, which  technically, would last us three days of hiking.

On most outings, I usually carry quart collapsibles in my pack, even if they aren’t filled.
They weigh next to nothing and eliminate the need to improvise. If you have to purify water, fill one of these quart containers, add the water purification chemicals and wait for them to work. In the meantime, you can continue drinking out of another water bottle.

A quality collapsible is also fairly rugged. Survival expert Peter Kummerfeldt has a collapsible he’s been using for about 20 years. It shows some wear, but is still dependable.

Military canteens: I’ve used these since I was a kid. In the 1960s, the aluminum surplus canteens were cheap and widely available. My buddies and I would go to “Ames Surplus” an outdoors store outside Ames, Iowa and load up with all sorts of cool stuff for camping.

The aluminum, and later, the plastic Vietnam-era canteens were rugged, reliable and easy to carry. This type of canteen is still cheap, and readily available. 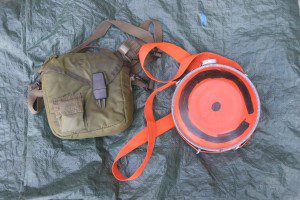 Blanket covered canteen: I also had a blanket-covered canteen when I was a kid. My water-carrying choices depended on what game we were playing at the time. The blanket canteen that appeared in every western  was for cowboy themes and the GI canteens were for playing war.

During my Civil War re-enactor days, (When I was much older, but still playing war games!) I used a wool-covered, replica canteen. They are small, but reasonably adequate, and the water in them heats up quickly. During a battle, march or maneuver, your canteen water ends up tasting tinny and is bathwater warm.

Here in Oregon, Fire Service surplus blaze orange canteens are frequently available. I carry one in my car whenever it isn’t freezing, as a backup supply. When I hike or hunt with my Lab Belle I water her with the orange canteen. With a two-quart or gallon capacity, and a wide shoulder strap, these canteens are easy to grab and go.

Bladder Systems: These systems have a lot of advantages. If you’re climbing, biking or doing some activity where your hands are busy, a bladder will work well for you. They come in a variety of sizes, and are particularly good to use with youngsters. The drinking tubes from the reservoir are handy and if drinking is convenient and easy, you probably will.

If you store your bladder hydration system in a freezer you can forget about mold!

But the bladder systems require regular cleaning, particularly in hot, humid environments. Other wise, some sort of mold may develop, and water may end up tasting musty. But there is a way to eliminate this problem.

I’ve been storing my Camelback and other types of hydration systems  in my freezer for the past two years, and this tip works!

Nalgene Water Bottles: My current water carrying bottle is a wide-mouth quart Nalgene. Stealing an idea from survival instructor Cody Lundin,  I wrap duct tape around my Nalgene, and have a loop of parachute cord attached on the side. I can clip the cord onto my belt clip.

This setup is rugged and easy to fill and drink out of. I replenish the Nalgene out of the  filled collapsibles in my pack as needed.

Quart Gatorade Bottles:  These are included because they are essentially free and reasonably durable. You can find 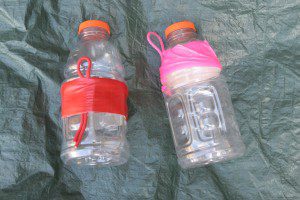 It took some duct tape and parachute cord to make these quart Gatorade containers into serviceable canteens.

other plastic sport drink bottles and adapt them too. The idea is to have a lot of water in any survival kit or bug-out bag, and these work well.

They should be used only as backup supplies, but their availability and price allows you to have many.

Quart or Gallon Ziploc Bags: As an emergency backup container, these will work. Carry the filled bags in a bandanna, and they will be less likely to burst. But if you anticipate needing additional water containers, take something more durable!

Another good hydration tip is to carry a V-8 vegetable or fruit juice in a can. Drink it at lunch. DON’T take soda, because most are diuretic, and may hasten dehydration.

Another necessity for staying hydrated is a Sierra cup or metal cup or pot to boil water. You may find a spring, or crack in a rock with water, and you’ll have to dip it out. Try that with your bladder system! 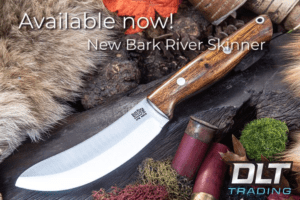