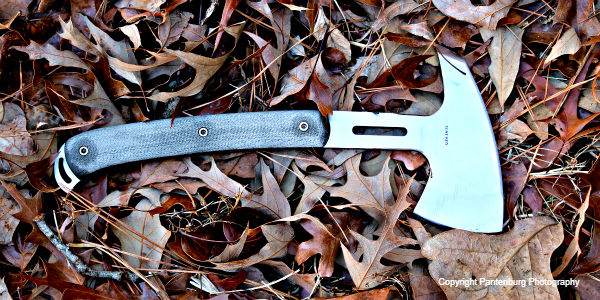 The Crash Ax cuts, chops and performs way above its weight class.

Here’s what I found out by using one on a five-day canoe trip.

Disclaimer: Knivesshipfree.com is a Survivalcommonsense sponsor. I did not get a free ax, was not paid to write this review and neither KSF nor Bark River Knives had any input into this piece. All I ever promise is a fair shake and honest review.

Nobody uses a light hatchet to chop logs in half unless they have something to prove. And that’s where I was last week on a Mississippi River sandbar. I had a fire to tend, several large cottonwood and sycamore logs to cut and I intended to wring out the Bark River Crash Ax.

Generally, I am lukewarm about taking hatchets on wilderness trips. I am usually out with newbees and in my experience, a saw is safer and easier for a beginner to use.  Any ax relies on velocity to cut, and a poorly aimed ax may ricochet and cause serious problems and possibly cause a survival situation.

The BR Crash Ax is not designed to be a chopper or woodsplitter, even though it performed those tasks well for me. The Crash Ax has a tactical design and is meant to be carried by a first responder who needs to hack down a door or make a quick entry into a wrecked car. 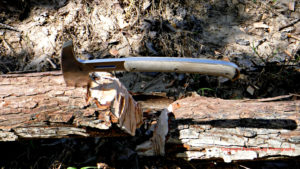 The Crash Ax is lightweight and efficient.

A tactical hatchet is also a tool, but it will be carried and (probably) rarely used. But it needs a tougher steel that can withstand hacking into all sorts of materials. It must also have a design that makes it a better weapon. The spike opposite the edge in the Crash Ax would be very useful for breaking car safety glass and as a weapon.

I’m not a first responder, and don’t anticipate needing another weapon. I got a Crash Ax with the idea of checking it out as a wilderness tool, much along the lines of the mid-1700s Longhunter tomahawk. And I was following the lead of  Horace Kephart and George W. (Nessmuk) Sears, pioneer camping and bushcraft experts, who included a hatchet or ax in their outdoor gear.

So I took the ax along on a five day canoe trip to use it as needed.

Here’s what I found out. 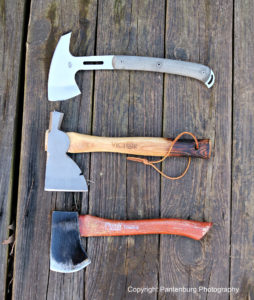 These hatchets have different designs for different jobs. The Crash Ax, top, is a tactical tool, the Huron Half Hatchet has a hammer end and the standard Plumb hatchet is designed to split kindling and chop wood.

Weight: The Crash Ax is a lightweight in the ax category. My other hatchet is a Huron 13 inch Half Hatchet and it weighs in at two pounds. Either one of these is light enough to be considered for a canoe trip. I’ve never taken a hatchet on a backpacking trip, and don’t anticipate why I would need one.

Edge holding: The Crash Ax is made of A2 steel, one of my favorite knife blade steels. I find A2 to be incredibly strong and tough, while still being easy to re-sharpen. I chopped several large cottonwood and sycamore logs in half for easier handling, and because I could. At the end of this work, the ax was still extremely sharp, and my arm was extremely tired.

Balance: The ax is head heavy, as a good chopper should be. This allows the ax to be swung with the least amount of fatigue. Balance is critical in any tool that will be swung continually to develop velocity. Ask any carpenter how important the balance of his framing hammer is!

Grind: The head appears to be ground as a convex, with a mini-bevel on the edge. (Somebody correct me if I’m wrong!) Whatever the grind is, it penetrates wood easily and holds the edge well. It also didn’t show wear after being used extensively on drift wood.

Grip: The handle measures eight inches, which is ample for a solid, secure two-handed grip. This is useful for people with smaller or less strong hands. In my case, my arm wore out before my fingers got tired!

Thickness: The Crash Ax’s .29-inch thickness is fine for a tactical ax.  On a chopper, there needs to be some steel in the head for weight and strength and the blade is typically thicker.

Hammering: I didn’t need a hammer to put tent stakes into the sand. But if I did, the flat side of the ax could have been used.

So do you need a Crash Ax?

As mentioned, I’m lukewarm on taking axes and hatchets on camping trips, and that is mainly because of the inherent danger. We don’t work with hatchets and axes anymore, and the average, occasional camper doesn’t have the skills and eye/hand coordination to safely handle one. It would be safer to rely on a saw for wood processing, and a plastic hammer to pound tent stakes in.

But in the tactical area, the Crash Ax shines. It is lightweight and tough. The design is superb for chopping, and it might be just the tool a first responder needs to gain rapid entry. And the ax may be just what a military person needs in his/her deployment gear.

My bottom line is that I won’t take gear into the field that can’t be relied on, and I think the Crash Ax can be depended upon.

Regardless of what you might need the Crash Ax for, I’m betting it won’t let you down.