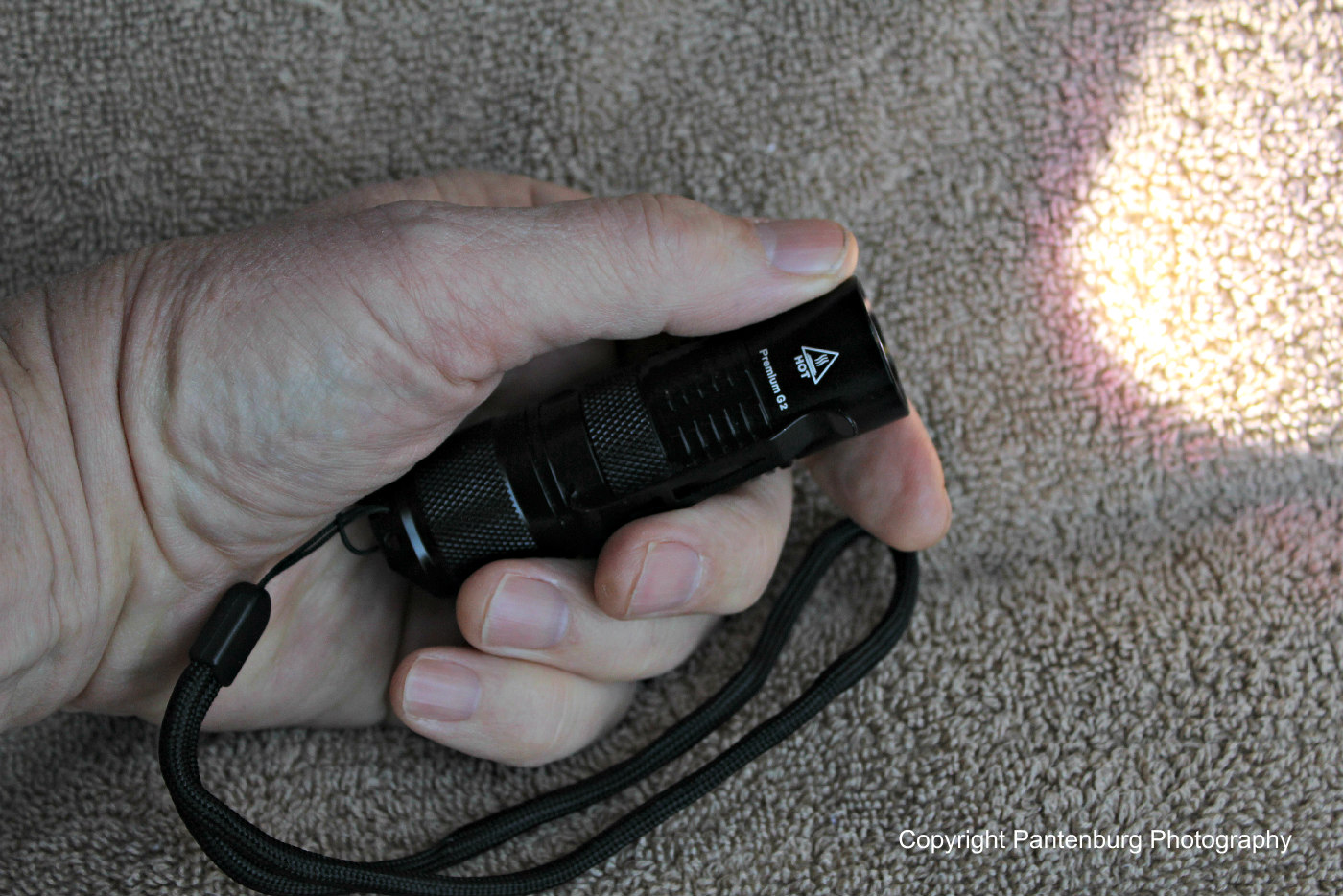 A flashlight should be part of your Ten Essentials emergency gear and your deer hunting equipment. Here are several that do the job for me.

Every deer hunter has been in the woods in the dark, either after dawn or dusk. Successful hunters have probably field dressed a deer solely by the light of a flashlight. And all of us have probably wondered if there were better choices for lighting.

In the early 80s, when my deer hunting addiction started, we carried heavy flashlights with two D batteries. When the Mini Maglite came out that used two AAs, we though we were going lightweight! Mine was about the size of a big cigar.

After  field dressing a Mississippi buck in pitch darkness with the Maglite clenched in my teeth, I started looking for headlamps. Drooling on a flashlight is not cool.

Today, there are incredible lights on the market, and choosing one for hunting, backpacking, fishing or any outdoor activity can require some comparison shopping.

Think about this before you invest:

Batteries: Something has to power the light. I like using the same batteries for all my lights and the GPS, to cut down on the number needed. For me, that is AAs or AAAs. But some of the new, compact light use tiny, specialized batteries, and they might not be that easy to find at some isolated rural country store. A rechargeable light, that can be plugged into your vehicle’s power port is a good idea. Plan accordingly.

Weight: Lighter is better. When something is too big and heavy, it tends to get left behind. Look for the lightest, most compact unit that will provide the light you want.

Power: Lumens are the measure of how bright something is. The more lumens, the more light. You don’t want or need a 1,000-lumen light most of the time. (FYI: 60-watt incandescent bulb = 800 lumens) The best choice is some sort of  a variable lumen light. You’ll find yourself using the lowest setting the most, since it uses the least power.

Durability: The light should at least be water repellent.  Nasty weather is a given on any hunt, and if you’ve never field dressed a big game animal when it’s raining or snowing, you will. The unit should also be able to take cold temperatures. Even if the light is waterproof and not supposed to freeze, cold will affect the batteries.

LEDs: My Mini Maglite had a place for a spare bulb, and in using it for more than a decade, the spare was never needed. That said, I wouldn’t look at a light that didn’t use LEDs. They last forever. You might find a cheaper light that uses bulbs, but you’ll be sorry when it lets you down.

So what is the best light for every deer hunting situation?

Beats me. I carry three different types of lights, and each has its own niche. Here are some thoughts, and some products I have tried, tested and suggest.

Keychain: These are the cute little lights you find in the cash register lanes and quality models retail for around 10 bucks. I carry one of these on every keychain, and several in my office daypack.

These are your backup. They can supply adequate lighting for walking a trail, and are incredibly handy around camp, or for a trip to the latrine. 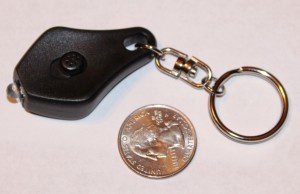 This LED light has a reliable on-off switch. It won’t turn on inadvertently.

Two years ago, I shot an eight-point buck right at dusk. It was hit hard, and did its death run right into a several-acre patch of head-high weeds. Finding it was a nightmare in the dark.

Two of the hunters were brand new to the game, and neither had a flashlight. My spare keychain lights worked much better than nothing.

Another light I discovered at a preparedness seminar is the Pak-Lite. It weighs no more than a standard nine-volt battery. The two-LED light fits on the nine-volt, and that’s all there is to it. (Ageism test – do you remember when they were called “transistor radio” batteries? Do you know what a transistor is? :-))

The Pak-Lite has two LEDs and is powered by one nine-volt battery.

The Pak-Lite story began when Barclay Henry, 20 years old at the time, decided to hike the Pacific Crest Trail 2,600 miles from Mexico to Canada. Barclay told me at a preparedness expo that he asked his younger brother, Benjamin, then 15,  to make him a small, lightweight flashlight that would last the whole trip. Barclay didn’t want to carry extra batteries or bulbs.

Pak-Lite was the result. He used the same light and battery the whole PCT hike, Barclay said, without changing a single battery or light bulb!  I’d call that field testing!

Headlamp: If I could only carry one light it would be some form of headlamp. 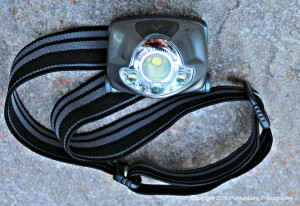 This Black Diamond Spot has worked well, and is carried in my hunting daypack.

Here are several I’ve tried and use.

Black Diamond Spot Two:  I’ve used this Black Diamond with complete satisfaction for about five years now. I field dressed two deer in pitch darkness in a Mississippi swamp solely by the light of the Black Diamond, and it worked wonderfully.

One of the bucks was way back in the tangles, and had to be packed out.  I gutted, skinned, quartered and cut off the legs and head with a good knife and by the light of the headlamp. The 75 lumens the Black Diamond puts out was entirely adequate for all the butchering work, and the hump out.

The Pelican 2765 LED Headlight is small enough to fit in a fanny pack, with no auxiliary battery pack, but it still manages to kick out 105 lumens. It has variable settings, ranging from low, suitable for reading in your tent, to the full bore spotlight. 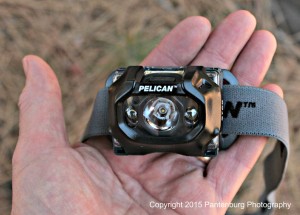 The Pelican 2475 is another high performing headlight.

Black Diamond Icon: This is an extreme sport light, and is superb for spelunking, rock climbing, and any situation where a spotlight might be needed. It is a variable, with settings ranging from a reading-in-the-tent setting to spotlight. The four AAs produce 320 lumens in the high setting.

The battery pack balances at the back with the light. The weight doesn’t seem excessive, but it might get to be a burden during long term use. Also, carrying the requisite extra batteries means you have to carry a minimum of four, and 12 would be better.

Spending several hours looking for a downed big game animal, or a long hike to a trailhead could wear out the  batteries. Take that into consideration before investing in any light.
Flashlight

A hand held flashlight earns its keep  when a blood trail has to be followed after dark, or you need to scout rough terrain. These lights are typically brighter than some of the smaller ones, and their value comes into play when you have to light up a large area.

I typically don’t carry a large flashlight, but here are two worth taking along.

Olympia RG245: This little unit puts out light way beyond what you’d expect. It produces 245 Lumens with five light settings: High, Middle, Low, Strobe, and SOS. The beam distance is 122 meters, according to the light specs. Peak beam intensity is 3,845 Candelas.

The Olympia RG245 is small and powerful.

I like the little light, but if you get one, make sure to take along the right batteries. It uses CR123 rechargeable batteries, or something compatible with them.

While you can get these at most box stores and every Radio Shack, the batteries might be in short supply in the backwoods.

Mini Maglite: I haven’t used the latest, updated LED model, but I carried a mini for about 15 years. At the time, the mini-mag was state-of-the-art, and compared to its predecessors, it was lightweight and incredibly efficient. 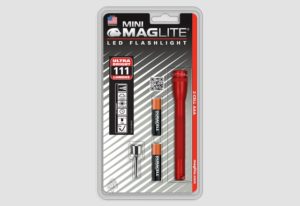 The Mini Maglite is inexpensive, uses common batteries and has a time-tested design.

A headband was available, allowing the user to convert the light into a headlamp. I got a Mini Mag headband shortly after the aforementioned incident field dressing the Mississippi buck.

The latest Mini Mag incarnation has the same look and size, and the same simple operation: Just twist the head to turn it on, turn it off and focus the beam.

The Mini-Maglite produces 111 lumens, is powered by two AAAs, and has a beam distance of 104 meters.

Like anything, what works for me might not work for you. And you probably have some choices of your own when it comes to lights.

So while we may not agree on what particular light to carry, we can probably agree on this: Take spare batteries, let someone know what area you’ll be in and be thankful you can go hunting!