Video: Standing on the corner, in Winslow, Arizona 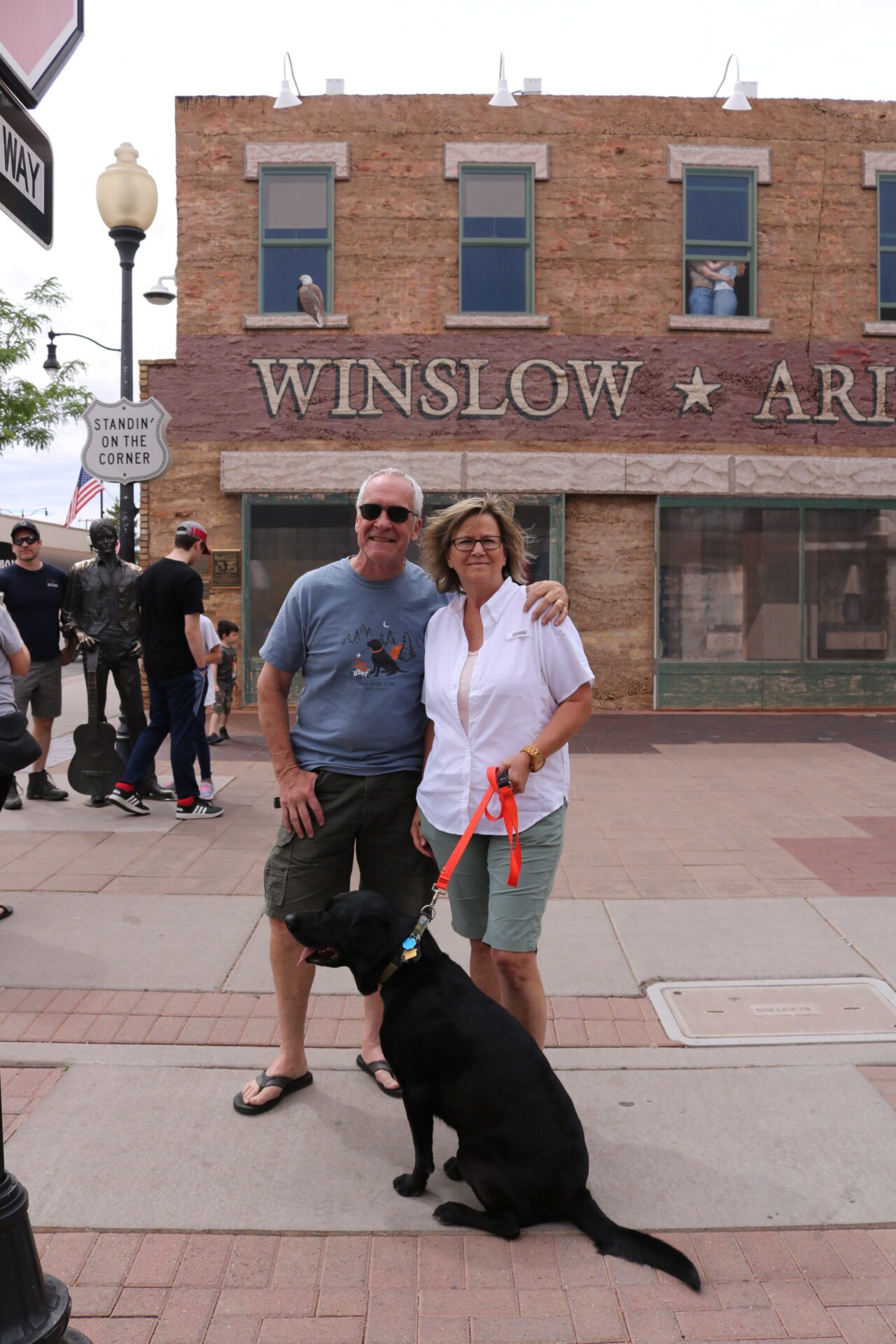 Anybody who grew up in the mid-70s knows the Eagles and their hit song “Take It Easy”.

We had to go stand on that famous corner.

My wife Debbie and I were driving on the freeway in 2021, en route from Mississippi to our summer sojourn in Oregon, when we saw the sign to Winslow. 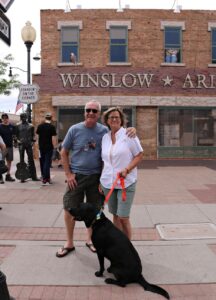 The iconic corner in Winslow.

“We gotta do this,” I commented, while hitting the turn signal. With no more planning than that, we decided to find that iconic “Standing on the Corner in Winslow Arizona” location and stand on it.

Winslow, Arizona, was all but forgotten when a freeway displaced Route 66 and travelers began bypassing the downtown in the late 1970s. In 1999, Winslow created the Standing on the Corner Park, located at Corner of Kinsley and E 2nd St. It stands as a tribute to Eagles guitarist and singer Glenn Frey.

Creating that park was a savvy move for Winslow’s downtown merchants. Even during the middle of the week of the off- season, tourists flock to the spot. An acoustic guitar busker was on site, playing, naturally, Eagles songs.

The mention of that corner in the 1972 Eagles song revitalized the downtown area.

“Take It Easy” was the Eagles’ first big hit, coming out on May 1, 1972. It peaked at No. 12 on the July 22, 1972, Billboard Hot 100 chart.[2][3] (according to Wikipedia) It also was the opening track on the band’s debut album  Eagles and it has become one of their signature songs, included on all of their live and compilation albums. It is listed as one of The Rock and Roll Hall of Fame’s 500 Songs that Shaped Rock and Roll. 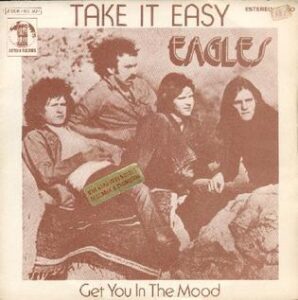 Travis Tritt also covered the song for the 1993 Eagles’ tribute album Common Thread: The Songs of the Eagles Wikepedia says. The video for Tritt’s version is notable because all five members of the Eagles got together again for the first time in 13 years after their break-up. It led to the reunion of the band a few months later.[5]

Anyway, visiting the corner was a hoot. The soft acoustic guitar music added to the mood. Statuary was conveniently placed for photo ops. An eagle was perched on a window. You could peek at an open window where a young couple was getting really friendly. A flat bed Ford is visible. Just being there was one of those take-you-back experiences.

Found out that I wasn’t the only one. Here is some of the feedback I got from a quick Facebook post:

Bill K. M.: “We just pulled off the interstate and stopped by the Chamber of Commerce. They filled us in on the corner where we could take pictures. Like you, when I saw the exit sign I knew I had to stop and take some pictures!

“It’s something that has to be done! We all love the Eagles. When I was in Arizona enjoying the scenery I said now I know how they were inspired to write.”

Pete W: “Love the pics and story Leon.. l hitchhiked thru there in ’73 and stood on that corner..lol.”

And we would really appreciate it if you would check out my book: “Bushcraft Basics: A Common Sense Wilderness Survival Handbook.” It is available on Amazon, at Barnes and Noble and your local independent bookstore.

Get a signed copy of “Bushcraft Basics” here: https://tinyurl.com/57v5dnxy