Review: Versa rescue knife could be a lifesaver 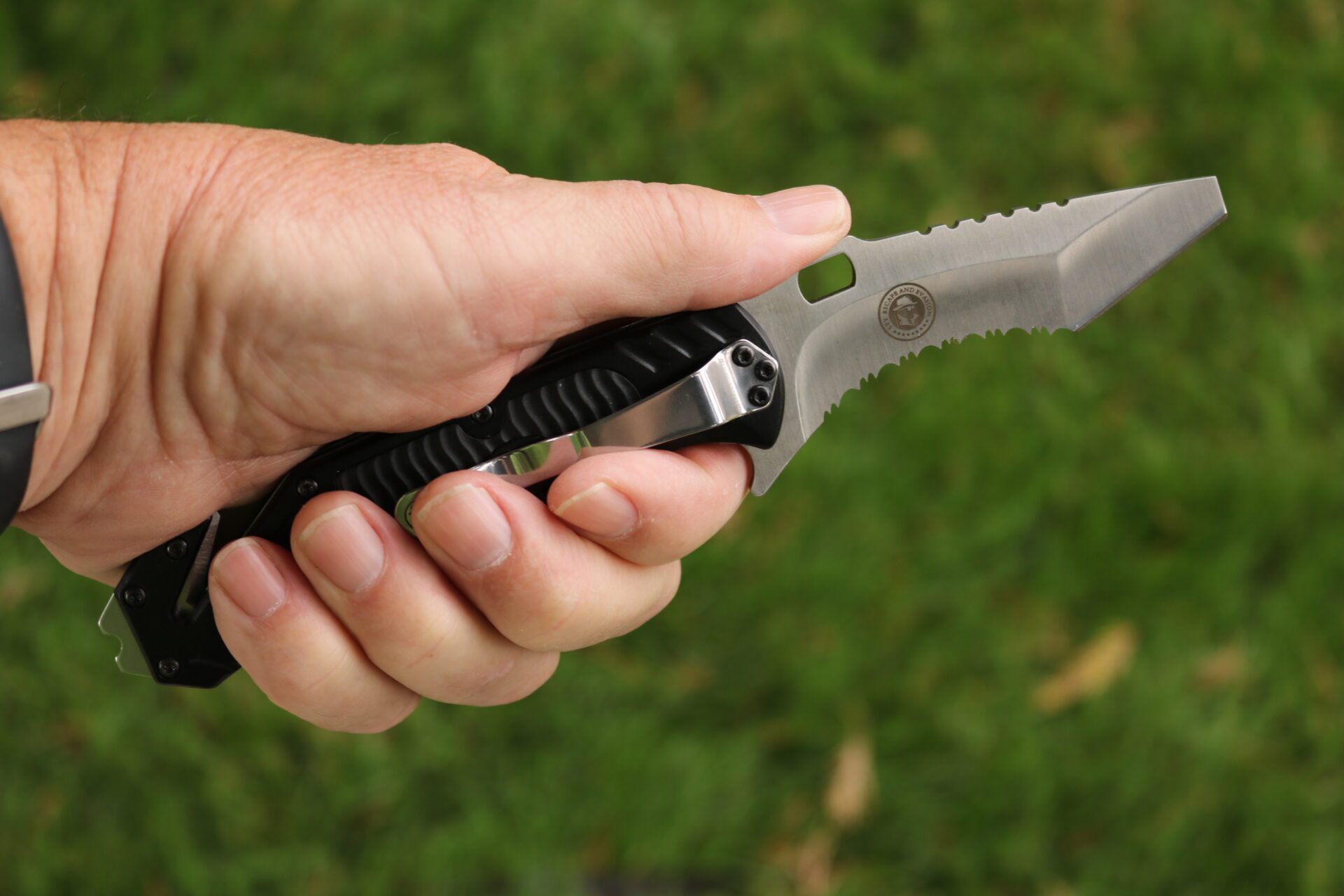 https://survivalcommonsense.com/wp-content/uploads/2022/08/IMG_6910-600x400.jpg 600 400 Survival Common Sense Blog | Emergency Preparedness Survival Common Sense Blog | Emergency Preparedness https://survivalcommonsense.com/wp-content/uploads/2022/08/IMG_6910-600x400.jpg 08/18/2022 08/21/2022
Thanks for sharing!
Share on Facebook Share
Share on TwitterTweet
Share on Pinterest Share
Share on LinkedIn Share
Send email Mail
Print Print
I carry a crowbar, machete, ball peen hammer and hatchet in my vehicle.
But what good will they do me if I’m trapped inside a wrecked car, with  a jammed seat belt behind a stuck door? How could that seat belt be cut or the window broken to get out?

DISCLAIMER: The Versa knife was sent to me by Jason Hanson to be used in a review. I was not paid for writing this review, and at the point of publication there was no affiliate or sponsorship relationship with Jason Hanson or his company. The following is my opinion, and there was no input from anyone.

“How do I break a window and get out of  here if I’m trapped inside?”

That was my wife’s question recently. The conversation had turned to car wrecks, and Deb wondered aloud if she could get out of the car if she had to break a window and cut the seatbelt.

It is a valid concern. 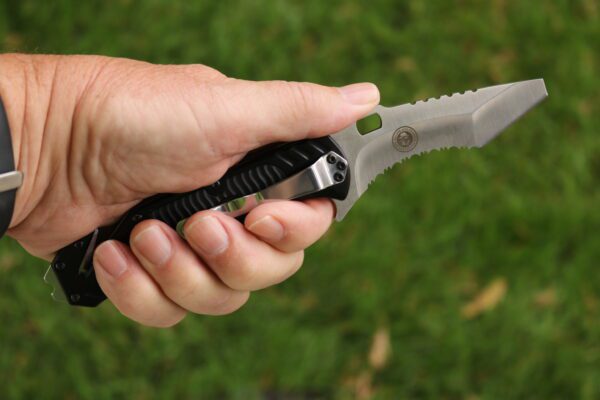 The Versa survival knife is designed to get you out of a wrecked vehicle when you may have to break a window or cut a seat belt.

I hadn’t given much thought to that particular scenario – I always have a Swiss Army knife in my belt pouch, and generally a rigid blade EDC on my belt. But the discussion brought up some points – what do you need in an escape knife?
Try this survival scenario: Sit in your vehicle with the seatbelt on. Imagine the door won’t open. How will you get out?
Recently, I’ve been testing the Versa Knife, a dedicated rescue knife designed by Jason Hanson.
Here are the specs:

I review products by using them for the purpose they were designed for. In this case, I would have to be trapped inside a vehicle and use the Versa knife to escape. Well, I hope that’s not gonna happen! But in using and carrying the knife, here is what I found out.

Here is the good stuff:

Steel: The AUS 8 stainless is a good choice for a knife that is not going to be used frequently. The Japanese-made AUS 8 stainless steel is a hard, rust-resistant metal and that is capable of acquiring a razor-sharp edge. You’re not going to do much whittling or carving with this blade.
Polymer handle: It has machined grooves at each end for improved gripping and handling. The handle is non-slip and comfortable to use. I don’t anticipate there will be much need for extended handling – again, this is not a knife for wood carving.
Serrated blade edge: This is a specialty edge. It is designed to saw through tough materials like cardboard, drywall, or thick manila rope. For an escape knife, this is a good choice.
There is also a small straight edge, which would allow some limited slicing.
Pocket clip: This is a rugged and handy accessory. The clip helps the knife ride well in my pocket and makes the knife easily deployed.
Wrench: This notch in the blade is supposed to be used to open bottles used in welding and torch cutting. Not sure why an escape knife would need this, but it’s not taking anything away from the blade.
Strap cutter: This is located at the end of the handle and it could be the life saver. The strap is put in the slot, pull, and the seatbelt is cut.
Pry tool: A small, extended pry tool is built into the pommel of the knife. It can be used to pull nails, staples, and as a mini pry-bar.
Point: The flattened point could work as a screwdriver in a pinch, but the point is just flat, and not ground like a slot screwdriver. The point’s value is that you won’t stab somebody while cutting them out of a wrecked car.
Then there is this:
Glass breaker: I kept poking my finger on the glass breaker when I carried the knife clipped in my pocket. I guess with practice you’d learn to avoid this. Still, under the duress of a vehicle escape, this might create a problem. Also, the breaker tends to poke the wearer when you’re sitting down while wearing the knife.
In all fairness, I don’t know where else that breaker could be put – the only other option would be to put it on the other end of the handle, and then it would poke into your leg when you sat down.
So do you need a Versa knife?
You’ve all heard the survival knife hype: “The last knife you’ll ever need to buy!” or “The last EDC knife you”’ ever need!” etc, etc, etc. Generally, this is all hogwash and a waste of time.
Personally, this knife doesn’t have the right features for me to carry it as an EDC knife. I’ve carried a Swiss Army Knife, generally a Tinker, for years, and I’ve never needed a better EDC. I typically also carry a rigid blade belt knife, and a Leatherman WAVE is usually at hand.

As a newspaper reporter, I’ve watched First Responders cut people out of car wrecks. My wife’s question about escaping from a trapped car is very valid. Most of our vehicles today have some sort of electronic lock. If the battery goes dead, you may be locked in.
The glass breaker and strap cutter alone make the VERSA knife a potential life saver.
While it won’t be an EDC knife for me, my VERSA knife makes a great addition to the center console of our vehicle. And that’s where it’s going to stay.