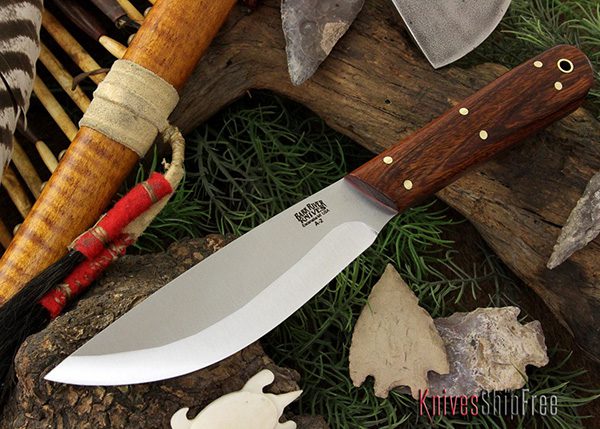 There’s a reason some knife designs are classics, and the Hudson Bay Trade Knife has earned its wilderness credentials.

Mention these cutlery designs to a knife aficionado, and they’ll probably know what you’re talking about.

And there’s a reason they’re called classics – these designs have proven themselves time and again.

Mountain men from the 1830s relied on proven knife designs like these Russell replicas.

Luckily for us traditionalist-types, Bark River has come out with another classic that will probably prove useful to the most “tacticool” survival/prepper.

The BR Hudson Bay Trade Knife is a reproduction of a knife made and sold in North America during the Pioneer/Mountain Man Period. Knives were tools. Everybody carried one and belt knives were a part of a frontiersman’s wardrobe. The average frontiersman probably didn’t spend a lot of time thinking about his knife – he got one that worked and used it.

The roach belly design goes back to the 1700s, and knife selection at rendezvouses were generally pretty standard. Records from that era show most Indians and mountain men were members of the big knife school of wilderness cutlery. Popular patterns included the standard 10-inch butcher knife, five-inch upswept point and the roach belly. 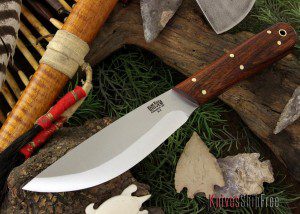 The Hudson Bay Trade Knife comes in a variety of handles materials, both traditional and state of the art.

The pattern was very popular because of the knife’s usefulness in skinning game quickly and efficiently. The shallow saber grind gave a very sharp edge and still allowed for splitting wood quickly for camp fires. And when push came to shove, the knife made a pretty fair fighting knife.

Bark River has taken this pattern and updated it with superior steel and improved handle material.

Here are the specifications:

I liked the looks of the knife as soon as I opened the box. I ordered a white bone handle, because it matched my favorite powder horn.

I haven’t had a chance to wring it out yet, but here’s what I’ve found so far.

Design: A Roach Belly was a go-to pattern back east and when the mountain men headed west to trap furs. A frontiersman had to travel light, and might only have one knife. That knife would have to do everything, from whittling to fighting. The continued popularity of this design from the mid-1700s  on prove it worked well.

Blade belly: Since a large part of the knife’s job was to skin and process big game animals, the frontiersman needed an effective skinning knife. I compared the trade knife’s belly to skinners I regularly use, and found the working belly to be very similar to my Nessmuck, Canadian and Russell butcher knife.  I didn’t get the knife in time to take it deer hunting this season, so I’ll have to delay the actual field test.

Steel: I like A-2 steel a lot. I used a BR Sahara and Kalahari Hunter on deer this season, and the A-2 steel holds a razor edge. I used each knife to completely gut, skin and quarter a whitetail, and both were still shaving sharp when the job was over. A mountain man would have traded a lot of pelts for a knife that stayed that sharp, that long.

Handle: An ongoing challenge for me is finding a knife handle long enough for my glove-size large hands. If the handle is shorter than four inches, I can’t use it comfortably for long. (The palm of my right hand measures four inches across.)  The trade knife is just right and the diameter of the handle also works for me.

Spine: I’m spoiled by the BR knife spines. They are ground like an ice skate, with 90-degree angles. This gives you an edge to scrape fatwood for tinder, scraping a hide or using with a ferrocerium rod.

I predict this knife is going to be very popular with history-minded users. But I’m also guessing that a lot of other users will find this design to be very useful for a lot of modern-day bushcraft and survival uses.

Here’s some thoughts on using the trade knife in the field for processing a deer from Bruce Cottrill of Wellington, New Zeland: 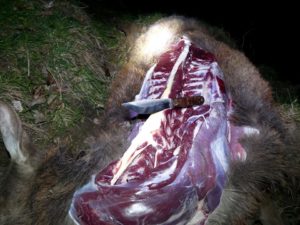 “So, a bit to add.The knife was very good. The sweep was great for peeling the skin back, and the front half of the blade was good for removing the back steaks and boning out the rest of meat right there where the deer was shot. Plenty of room on the handle for my large hands.

“It would still slice paper when I got home, albeit not as nicely as before. It will strop up no trouble.

Because of the shape of the blade, for all around use on an animal the front half of the blade gets most of the work, and it was noticeable that was where the edge dulling had occurred. That’s just a natural consequence of using a skinner for boning.

“All in all a real classic that was a pleasure to use.”

Like I mentioned, there’s a reason they’re called classics!